18 Injured in Fire Aboard Ship at Naval Base San Diego 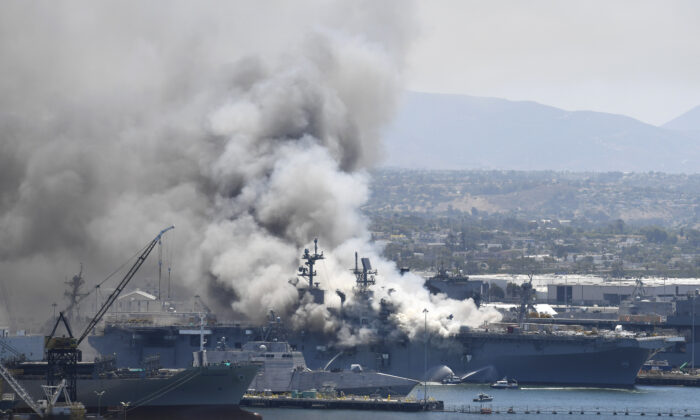 SAN DIEGO—Eighteen people suffered minor injuries in a July 12 explosion and fire aboard a ship at Naval Base San Diego, military officials said.

San Diego firefighters arrived at the three-alarm fire on early on July 12 to find thick black smoke billowing hundreds of feet into the air from several points along the 844-foot amphibious assault ship docked at the San Diego Naval base, according to live video footage of the scene.

Emergency crews in boats were alongside the burning ship, spraying it with hoses.

Eighteen people were hospitalized with “non-life-threatening injuries,” Raney said in a brief statement. He didn’t have additional details.

Previously officials said at least one person was treated for smoke inhalation.

The cause of the fire was under investigation. It wasn’t immediately known where on the vessel the blast and the fire occurred.

The flames sent up a huge plume of dark smoke visible around San Diego.

San Diego is the Bonhomme Richard’s home port, and the ship was undergoing routine maintenance at the time of the fire.

About 160 sailors and officers were on board, Raney said—far fewer than the thousand typically on the ship when it’s on active duty.

The ship has the capacity to deploy and land helicopters, smaller boats, and amphibious vehicles.

Earlier on July 12, the San Diego Fire-Rescue department wrote on Twitter that there had been an explosion at the ship and that they were working with Federal Fire to clear the area.

Around noon local time, the department said all its personnel had been instructed to exit the pier, while aerial video footage showed the blaze appeared to grow.

The ship could burn for days, “down to the waterline,” San Diego Fire Chief Colin Stowell told CNN’s Erica Hill on July 12.

“The Navy is the only one that will work from the pier side, as well as the harbor PD on the fireboats, working from the waterside to contain the heat of it,” Stowell said.

It’s unclear what started the fire. Initial reports from the ship indicate it started in the well deck, according to a defense official.

The well deck is where small landing craft enter and exit the belly of the ship.

Reuters and The CNN Wire contributed to this report.

Fox News Was Turned Upside Down by This Shocking Resignation
Dr. Fauci Wants to Make One Corona Restriction a Permanent Part of Our Lives
Barack Obama Hijacked a Funeral to Make a Shocking Political Attack on Republicans