A Prison Created by Your Mind 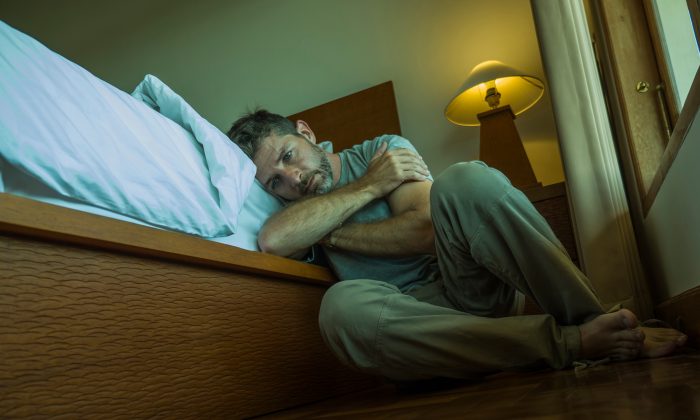 Life can be hard—and believing there is nothing you can do about it makes it worse. Fortunately, this is rarely true if you take a moment to get out of your head and check in on reality. (TheVisualsYouNeed/Shutterstock)
Updated: 2019-09-24 07:50:11

It is a condition coined by psychologist Martin Seligman in 1967 that describes the erroneous belief that there is no solution to a problem, even when there actually is—sometimes right in front you.

Seligman discovered the condition during an experiment.

The experiment was simple. It started off with two groups of dogs. Group one dogs were conditioned to expect an electric shock when they heard a tone. They could do nothing to avoid the shock. Group two dogs were not so conditioned.

With a dog in the box, the scientists would sound the tone, and then shortly thereafter, the left side floor would exhibit a mild electrical current.

The group two dogs (which were not conditioned by the sound of the tone), had no reaction to the tone, and then, upon being shocked, yelped and jumped quickly over the small barrier to the other side of the box that was not electrified.

Group one dogs, however, did nothing. They heard the tone and knew to expect a shock due to their prior conditioning. When shocked, the dogs remained where they were, whimpering, convinced they could not escape the pain.

They had learned to be helpless, so they just stayed there, accepting the pain.

The same happens with humans. And most of us don’t even realize it. Dreams are abandoned, businesses are shut down, and people decide not to get up after falling because they have lost hope. They think it’s all over. They think it’s not worth even trying.

And yet, hopelessness is a lie created by our minds.

I suspect at least one thought of learned helplessness runs through each of our minds daily. We give up without trying because of prior situations we deem to be similar. But in most cases, the new situation is not exactly the same. Almost every situation is different than what came before. That includes ourselves. We learn new things, we mature, we change. But we foolishly convince ourselves the situation is the same as before. The trick? We need to start being more aware of this fallacy every time we face a decision where we are tempted to give up before we even try.

What’s a real-life situation of learned helpless in action? The most common example is “battered-woman syndrome.” In these situations, an abused woman is so intimidated by her spouse that she won’t leave him. She’s convinced that somehow he is going to hurt her if she does. As a result, even when an opportunity to leave arises, she stays.

The thought process of someone in this situation is as follows, “If I leave, somehow he’ll find me. Besides, he takes care of me in many ways, and I’ll probably never find someone else. So if I leave, I’ll also be terribly lonely. I have to stay. That’s what’s best for me.”

Such a woman is not pathetic. She has simply been tricked into thinking there is no escape from the situation.

Make no mistake, however: There is almost always an escape. And with other life challenges, there are often more ways to get through them than we have the will power to try.

Learned helplessness doesn’t just appear in extreme situations like domestic abuse. We all make poor decisions or abandon dreams or plans because something makes us believe there is no hope, and that we are powerless to change a situation for ourselves.

For example, someone may have paid money for advertising, only to see all the money disappear, with zero new clients. Then they decide advertising never works. That’s a form of learned helplessness. Instead, they could have reflected on how to make a better ad or find a better medium.

Instead of learning from failure to draw insight and improve, learned helplessness stunts our growth by keeping us from trying again, like someone who experiences terrible turbulence on a plane and refuses to fly again, missing out on a world of experiences.

This can happen in business as well where an executive is known for being a specific kind of risk-averse, to the point where employees won’t even pitch potentially actionable proposals. The examples are innumerable.

The point is: If you don’t start to make an effort to recognize when your statements or actions are based on learned helplessness, you will lose out on opportunities to advance your life, career, and relationships. You’ll also make bad decision.

Whenever you bring untruths into the decision-making process, you lose. So, the solution is to do all you can to make sure your decisions are made with accurate information. Here are some tips to help you do just that.

Every Day, Ask Yourself 5 Questions

How has the situation changed recently? How have I changed? How has my personal situation changed? How have the other people involved changed? How has the world changed?” Often, we can’t see the forest through the trees, and we don’t even realize that some major variable has changed. How many times have you found yourself in a seemingly tough situation, and then suddenly, like magic, you remember something that has changed, and voilà, the situation is a lot less dire. That’s a perfect scenario explaining how learned helplessness can trick us into believing a situation is different from what it actually is.

Stop Being So Cocky

Guess what? You’re not perfect. It’s time for you to admit it. You are a fallible creature, just like the rest of us. It sounds odd to think that someone who is cocky could be helpless, but think about it: Someone who is cocky and arrogant and knows everything is very unlikely to listen to what other people have to say. Yet, often, when you are fixated on the impossibility of some situation, you absolutely need someone else to remind you that you’re being overly pessimistic. So keep reading business and psychology books. Make sure you encourage critical feedback to help you grow. Stop assuming that what didn’t work last year also won’t work this year. Maybe this year, the situation is different.

Learn How to Talk Back to Yourself

When you hear your inner voice telling you negative things, turn it around. When it says, “Give up,” you say, “Get up.”  When it says, “You’re a failure destined for mediocrity,” you say, “Every failure is one step closer to success.” It’s hard to recognize when you are talking yourself down and then elevate that thinking with something positive, but it’s a talent worth mastering. Almost nothing contributes more to our depression, sadness, and misery than listening to the negative bozo in our brain who thinks he knows everything. No joke: You need to tell him to shut up, and remind yourself what you really are: An amazing individual with an incredible potential to create and innovate.

The nice thing about recognizing and understanding learned helplessness is that you will be able to improve your own life and have the tools to help your friends, family, and colleagues do the same.

Everyone tries to put on a strong front in this brutal world, but the truth is we are all hurting, and more often than not, it’s because we are listening to the learned helpless diatribes in our heads. Do not listen to the lies. Ignore the false criticism. Do not believe that you are helpless or that your situation is hopeless. You are full of strength and resourcefulness. Your situation is full of possibility.

Monroe Mann holds a doctorate in psychology, an MBA, a law degree, and is also a bronze-star nominated Iraq war veteran.  He is the founder of the positive psychology-based social network, BreakDiving.io and the author of “Time Zen,” “Successful New Year,” and “T.R.U.S.T.”  For more info: MonroeMannLaw.com

Go Back: Life Style
Previous: Parents Warn Others of Synthetic Pot After Son Took One Hit and Never Woke Up
Next: Sci-Fi Movie ‘They Live’ Was Really a Documentary! Now We Know How to See Their Hidden World! (Video)
source : www.theepochtimes.com
''