African Scientists Discover 2 Dwarf Giraffes So Small, They’re Only a Bit Taller Than a Human 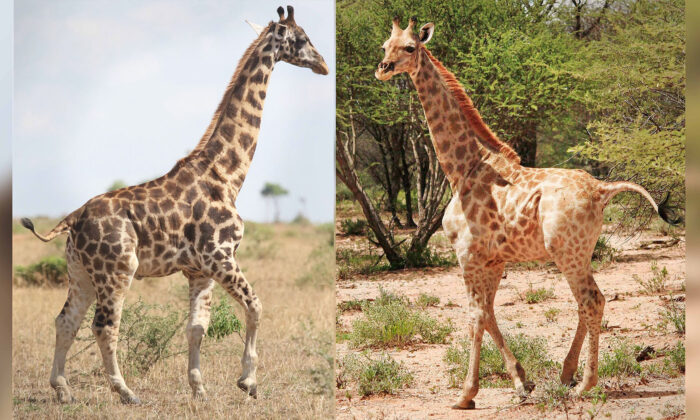 Conservation scientists with the Giraffe Conservation Foundation (GCF) have discovered two giraffes with a rare form of dwarfism that renders the animals half their normal size and height.

In fact, these giraffes are so small, they’re only a foot or two taller than a large human.

The GCF announced in a press release this month that a Nubian giraffe was discovered in Murchison Falls National Park, Uganda, measuring at just 9 feet, 4 inches. He was affectionately dubbed “Gimli,” after a J.R.R. Tolkien’s Lord of the Rings character.

The second giraffe showed up more than once on a private farm in central Namibia. When measured, he was found to be just eight-and-a-half feet tall. He is known by the less-puny name of “Nigel.”

Researchers concluded that the spotted creatures have a form of dwarfism, also known as skeletal dysplasia, a condition that is characterized by shortened anatomy and abnormalities in bone development.

Recently, the researchers with the GCF published a paper in BMC Research Notes, detailing the discovery.

“Instances of wild animals with these types of skeletal dysplasias are extraordinarily rare,” wrote Dr. Michael Brown, lead author of the report. “It’s another interesting wrinkle in the unique story of giraffe[s] in these diverse ecosystems.”

What makes this discovery truly extraordinary is that both giraffes have matured into adulthood.

Skeletal dysplasia has been known to lead to death in smaller domestic species. And according to GCF researchers, “[a]lthough seldomly observed in wild animals, cases of skeletal dysplasia in captive animals have been associated with inbreeding and a lack of genetic diversity.”

The researchers’ study points out that the Ugandan giraffe population suffered from civil unrest and poaching in the 1980s, leading to a bottleneck of the species. They speculate whether a reduction in genetic diversity has led to the development of dwarfism in the animals.

For now, scientists plan to observe the two and learn whether they have any differences in behavior or social status in the wild due to their reduced stature.

Emma Wells, researcher with the GCF, explained that the giraffes are so small, they seem like babies. In fact, the owner of the farm in Namibia saw Nigel often, but it took years for him to realize his wild visitor wasn’t growing.

“While the Namibian farmer had spotted Nigel regularly over the years, it was only after our observations that he realized that Nigel was not a juvenile but a fully-grown male giraffe,” Wells said in a statement. “It is mainly in comparison to other giraffes that his difference in stature becomes obvious.”

The GCF reports that only about 111,000 giraffes remain in the wild of the African continent today.

“Giraffes are undergoing a silent extinction in Africa,” said Dr. Julian Fennessy, director and co-founder of GCF. “The fact that this is the first description of dwarf giraffes is just another example of how little we know about these charismatic animals. It is only recently that our research has shown that there are four distinct species of giraffe. There is just so much more to learn about giraffes in Africa and we need to stand tall now to save them before it is too late.”

Though the giraffes have undergone a crisis of near-extinction, their populations are on the rise thanks to the efforts of organizations like the GCF.

We would love to hear your stories! You can share them with us here: [email protected]

Go Back: Science
Previous: Biden Moves To Have U.S. Rejoin Climate Accord
Next: Finally One UK Newspaper (the Telegraph) Challenges the Narrative That the BS "2nd Wave" is Worse Than the First
source : www.theepochtimes.com
''

And Just Who is "Shaking The Jar"?