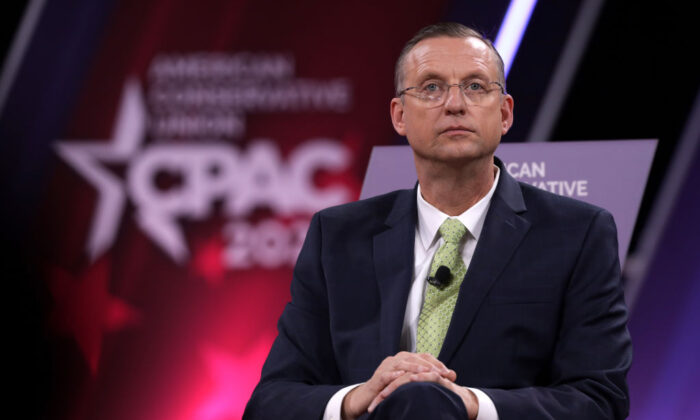 Rep. Doug Collins (R-Ga.) has introduced a new bill that would give President Donald Trump the power to impose sanctions on China if Beijing fails to cooperate with a full investigation into what led to the current pandemic.

“The Chinese Communist regime’s coverup of the coronavirus outbreak cost hundreds of thousands of lives worldwide and caused unfathomable harm to the global economy, and they must be held accountable,” said Collins, according to a May 13 press release from his office.

Collins’ bill, named the COVID-19 Accountability Act, is a companion bill to one introduced by Sen. Lindsey Graham (R-S.C.) on May 12. The House bill was co-sponsored by at least 23 lawmakers, including Liz Cheney (R-Wyo.), Rodney Davis (R-Ill.), and Mark Walker (R-N.C.).

After news of the bills’ introduction, Beijing warned of retaliation measures against the United States.

Great to hear @RepDougCollins is introducing my China sanctions bill in the House of Representatives.

Doug is off and running in the House to make China cooperate regarding the coronavirus. https://t.co/JIqpOEOOMa

The CCP (Chinese Communist Party) virus, commonly known as the novel coronavirus, originated from the central Chinese city of Wuhan, the capital of Hubei Province. The virus has since spread around the globe. In the United States, over 1.39 million people have been infected, and 84,100 people died due to COVID-19, the disease caused by the virus.

If passed, the bill would require the president to make a certification to Congress within 60 days that China had “provided a full and complete accounting to any COVID-19 investigation led by the United States, its allies, or United Nations affiliates, such as the World Health Organization (WHO).”

The president would also have to certify that China has closed all wet markets. Chinese authorities initially suspected that the virus originated from a fresh food market in Wuhan, but studies on Wuhan’s initial patients have called into question that theory.

If Beijing fails to cooperate, the president would be authorized to impose sanctions on Chinese officials, including asset freezes, travel bans, and visa revocations, according to the bill’s proposals. Moreover, the president would be able to restrict U.S. financial institutes from offering loans to Chinese firms and prohibit Chinese firms from being listed on U.S. stock exchanges.

“By giving the President the authority to impose a wide range of sanctions on Chinese officials, the COVID-19 Accountability Act will guarantee China is held fully accountable for the worldwide devastation they’ve caused and will ensure the American people get the answers they deserve,” Collins said.

#China must be investigated for their adversarial behavior that made it harder for America to respond to this pandemic. Beijing is not our ally.

I support and co-sponsor legislation by @RepDougCollins to give @realDonaldTrump authority to sanction China if they don't comply.

The bill also calls on the secretary of state to come up with a strategy to help Taiwan become an observer at the World Health Organization (WHO).

Beijing has blocked Taiwan from being a WHO member because it considers the self-ruled island its territory.

The Senate recently passed a bill supporting Taiwan’s participation in the WHO, as the island has earned international plaudits for its success in containing the virus—440 confirmed cases and seven deaths as of May 14, and no new local infection cases in the last 32 days.

Beijing lashed out upon news of the Senate sanctions bill, and hinted at possible retaliation against the United States.

Zhao Lijian, spokesperson for China’s Foreign Ministry, accused the senators of showing “no respect for facts,” calling their actions “highly immoral,” at a daily briefing on May 13.

China’s hawkish state-run newspaper Global Times, in an article published on May 14 that called out Sen. Graham by name, said that Beijing was preparing “punitive measures” against U.S. lawmakers who have “cooked up anti-Chinese bills,” as well as the state of Missouri and other U.S. individuals and entities, citing unnamed sources.

The state attorney generals in Missouri and Mississippi have filed lawsuits against Beijing over its coverup of the virus, while several U.S. law firms have begun class-action lawsuits. Similar lawsuits have been filed in Italy and Nigeria.

In another May 14 article, the Global Times said senators Tom Cotton (R-Ark.), Josh Hawley (R-Mo.), and two other U.S. lawmakers will be placed on China’s sanctions list.

The Global Times also slammed Trump, accusing the president of “shifting blame” with these U.S. lawsuits, and trying to “find a solution” for his reelection bid in November.

“#Coronavirus has become a matter of life and death in every corner of the world. When China claims itself as a “responsible world power”, #CCP should shoulder its responsibility and be completely transparent, instead of merely taking benefits and burying truths,” Wong wrote.