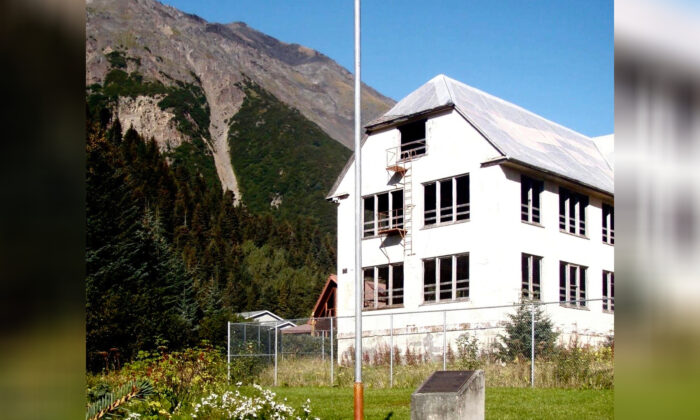 A building that remains at the site of the Jesse Lee Home in Seward, Alaska, where the territorial flag, which later became the Alaska state flag, was first flown. (Dorene Lorenz via AP)
Updated: 2020-07-13 06:50:03

ANCHORAGE, Alaska—The fate of one of Alaska’s most historic yet neglected structures may be decided on July 13 as officials in the city of Seward weigh whether to demolish a former Methodist boarding school where the Alaska territorial flag was first flown almost a century ago and where its Alaska Native designer lived.

Benny Benson was among the orphans and displaced children who lived at the Jesse Lee Home, many of whom were sent there after the Spanish flu devastated Alaska Native villages. Benson, a 13-year-old Aleut boy sent to the home after his mother died of the flu, won a territory-wide contest in 1927 to design the flag, which became the state flag after statehood was granted in 1959.

Benson is believed to be the only Indigenous person to design a state flag, said Dorene Lorenz, a former Seward City Council member who has been behind efforts to save the structure for years.

“I don’t understand why you would rush to destroy a landmark when there’s obviously interested parties wanting to present to you other options,” she said.

One such group, the Alaska Association for Historic Preservation, plans to make a last-ditch effort to save the structure by making a presentation during a public hearing before July 13’s scheduled vote. If successful, they will bring together those with historic preservation expertise to formulate a plan.

“We got a lot of people who are anxious to get working on this,” the group’s president, Trish Neal, said. “And so I have no qualms that we can’t pull this off. It’s just we have to get the city council to back off and let us do this.”

What to do with the site has been a source of contention since the home was heavily damaged in a magnitude 9.2 earthquake in 1964, the second most powerful ever recorded. One of the three main buildings was damaged and demolished after the quake. The boarding school was eventually moved to Anchorage, and the Seward site has sat unused since.

City officials said the home has deteriorated more in the last decade between engineering studies, but Neal offered another engineer’s report from this spring that concluded while there has been a deterioration in the last seven years, “restoration is a viable option,” but must be done quickly.

Attempts by individuals and a group over the years to refurbish the home have sputtered and stalled. Seward Mayor Christy Terry said when the Friends of the Jesse Lee Home lost a multimillion-dollar state grant a few years ago, ownership reverted to the city. The legislature allocated $1 million to the city.

“We do not have the capacity right now to have an homage to a building that’s so degraded because of the inaction, frankly, of a group that was their very last chance to make that happen, that the state-funded incredibly well,” Terry said. “Something like that is never going to happen again.”

She said there is no rush to demolish the site but the council has a June 30, 2021, deadline to use state funding.

“For them to blame us for where we are now, they are sorely mistaken,” she said. “So people want to come in at the 13th hour. No one has a check. No one has any ideas about how that property can be operated or what to do with it.”

If the council approves the demolition measure, the city would use the state money to remove hazardous materials like asbestos, demolish the remaining two buildings and haul the material away. The proposal also calls for building a memorial at the site.

That design would involve community input, Terry said, adding she has her own ideas on what a memorial would include.

She would like to salvage any usable beams and incorporate them into a pavilion that would include storyboards spelling out the home’s place in Alaska history. The pavilion could be rented out, she said. Terry would also like to include a new playground at the site and close another nearby playground, turning that lot into single-family housing.

If the council doesn’t vote for demolition, they will then later consider other options, including one that would begin refurbishing the buildings.

Retired Alaska State Historian Jo Antonson said the Jesse Lee Home was an important institution in state history, noting that the Army used the buildings during World War II and even camouflaged them using paint to protect them from the enemy.

“It’s just sort of disappointing that the city and the residents have never embraced trying to fix up the buildings that remain and find a good use for them,” she said.

Schumer says he will soon introduce a marijuana legalization bill
Liz Cheney defiant in floor speech ahead of House GOP vote to oust her as conference chair
White House reporters are allowing Biden admin to 'edit' their own quotes: report

Woman Confesses to Murdering Teen Over 30 Years Ago, but Avoids More Prison Time