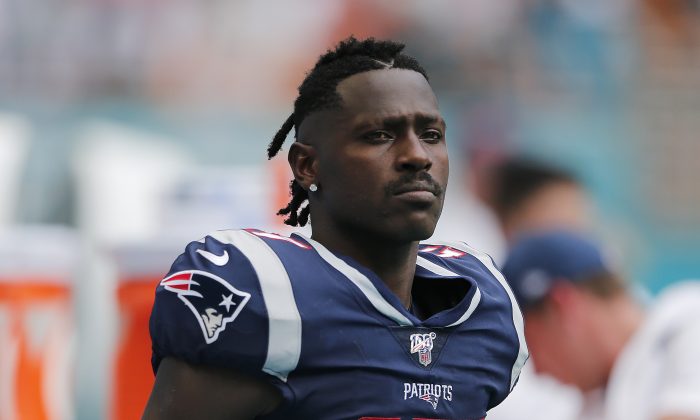 Antonio Brown #17 of the New England Patriots looks on against the Miami Dolphins during the fourth quarter at Hard Rock Stadium on September 15, 2019 in Miami, Florida. (Photo by Michael Reaves/Getty Images)
Updated: 2019-09-20 15:50:33

Several weeks ago, Brown was released by the Oakland Raiders after publicly feuding with the team’s management.  He was traded to the Raiders by the Pittsburgh Steelers during the offseason.

A day before, Nike said it has cut its ties with Brown.

Several of Brown’s jerseys are still available via Nike’s website, but they are the ones when he played for the Pittsburgh Steelers and Oakland Raiders.

Brown had previously discussed his Nike deal on YouTube, saying, “I am getting a huge Nike deal, which is opening up leverage for a lot of other guys and a lot of up-and-coming players to get in the marketing world and making money off the field.”

In February, he came out with a $100 “Nike Tech Trainer Antonio Brown” shoe before he was traded to the Raiders. The shoe featured Brown’s No. 84 and the phrase, “Business is Boomin,” according to ESPN.

Two people with knowledge of the investigation into Brown being accused of sexual assault told The Associated Press that one of the accusers has met with NFL investigators and that there is no timetable for concluding the probe.

Both people spoke to the AP on condition of anonymity Wednesday because of the sensitivity of the case.

Thank you for the opportunity @Patriots #GoWinIt

Patriots’ statement: “The New England Patriots are releasing Antonio Brown. We appreciate the hard work of many people over the past 11 days, but we feel that it is best to move in a different direction at this time.”

A spokesman for the district attorney’s office in Allegheny County, Pennsylvania, said: “Our office, along with the Allegheny County Police Department, made contact with counsel for the plaintiff in the federal lawsuit involving Antonio Brown. Procedurally, it appears there is a statute of limitations issue in moving forward with any inquiry involving the Allegheny County allegation mentioned in the lawsuit.”

The allegations by Britney Taylor made against Brown in a civil lawsuit became known days before the four-time All-Pro wide receiver made his debut with the defending Super Bowl champion New England Patriots. Taylor had a lengthy meeting with the NFL this week.

Taylor has accused Brown of sexually assaulting her on three occasions.  A second woman also said Brown made an unwanted advance.