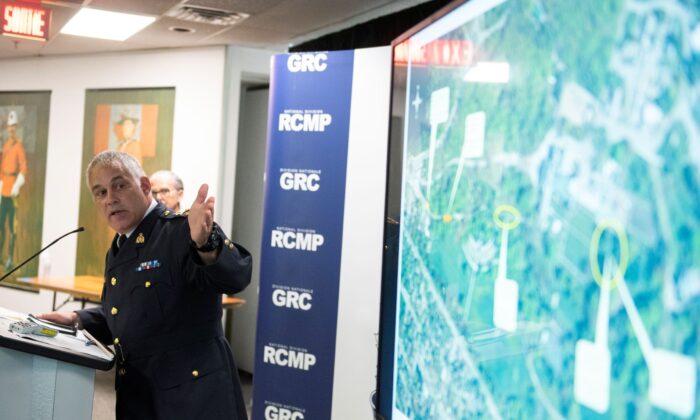 RCMP Deputy Commissioner Mike Duheme points toward a map with timestamps indicating the path of an armed man who breached the gates of Rideau Hall on the morning of July 2, during a news conference at the RCMP National Division in Ottawa on July 3, 2020. (The Canadian Press/Justin Tang)
Updated: 2020-07-04 12:16:03

A man who rammed his truck through a gate at Rideau Hall Thursday was loose on the grounds with a gun for 13 minutes before police laid eyes on him, the RCMP said Friday.

Mounties then talked to the man for more than 90 minutes before he finally gave himself up and was arrested.

Deputy Commissioner Mike Duheme said the man, who news reports have identified as Corey Hurren but police have not yet confirmed that, will be charged with multiple offences today and is already in court awaiting a bail hearing. Police and the Department of National Defence have confirmed the suspect is a member of the military.

Duheme said the man had “several weapons” on him including at least one gun, but that he was not known to RCMP prior to Thursday, July 2.

At a morning news conference on Friday, Duheme said the man drove a large pickup truck through Thomas Gate on the grounds of Rideau Hall at around 6:30 a.m. That’s a secondary entrance near the main gate to the grounds, wide enough to admit a vehicle but typically used only by pedestrians.

Hurren made it about 120 metres along a footpath in the truck before it became disabled and he abandoned it, Duheme said.

He then ran up a path, carrying what looked like a rifle, to Rideau Hall’s rose garden. He hid there for three minutes before continuing along footpaths to the greenhouses that are attached to the back of the residence where Gov. Gen. Julie Payette lives.

A short path leads from the back of the greenhouses through a stand of trees to Rideau Cottage, which is the current residence of Prime Minister Justin Trudeau and his family.

“I want to stress that there was never any danger to the prime minister and his family nor the governor general as neither were on the grounds at the time of the incident,” Duheme said.

National Capital Commission staff noticed the abandoned truck and alerted the commissionaires, who spotted the man walking on the path toward the buildings while holding a gun. The RCMP security detail on the grounds spotted the suspect around 6:40 and a site-wide lockdown was ordered, but police did not confirm they had visual contact with the suspect until 6:43 a.m.

At 6:45 a.m. the officers began speaking to the man, Duheme said. The suspect did not respond until 6:53, giving police his name and some other information. The police and the suspect talked for an hour and 42 minutes before he was taken into custody at 8:29 a.m.

“I cannot emphasize enough how effective our members were in being vigilant, reacting quickly, and using successful de-escalation techniques to resolve this highly volatile incident swiftly and without injury to anyone,” Duheme said.

He said police have some idea of the motive for the events but will not speak about it publicly yet because of the ongoing investigation.

He said immediate security changes have been made at Rideau Hall as a result of the incident, but noted the RCMP never discuss the security that protects either the governor general or the prime minister.

A chemical, biological, radioactive, nuclear and explosive weapons team was brought in to search the suspect’s vehicle as a precaution, he said.

According to Hurren’s LinkedIn account, he lives in the remote town of Bowsman in northern Manitoba, about 390 kilometres northwest of Winnipeg near the Saskatchewan border. He has owned a sausage-making business called GrindHouse Fine Foods since 2014.

The page also shows that Hurren is a member of Canadian Ranger in Swan River Patrol, a veteran from Royal Canadian Artillery, and a member of Bowsman Lions Club.

The town of Bowsman has a population of less than 300. The reeve of the town described Hurren as a “good community member” who’s always friendly.

“When I walked by him, it was not just, ‘No answer,’ it was, ‘Hello, how are you doing today?'” Pacamaniuk told CBC.

Talking about what happened in Rideau Hall, Pacamaniuk said “We’re all a bit shocked that something happened in Ottawa.”

CBC cited a source saying Hurren had driven his truck from Manitoba some 2,000 kilometres all the way east to Ottawa. It’s unknown why he drove to Ottawa.

Go Back: World News
Previous: The 53 totalitarian countries that support the Chinese Communist Party and its repressive law against Hong Kong
Next: Germany Is First Major Economy to Phase out Coal and Nuclear
source : www.theepochtimes.com
''