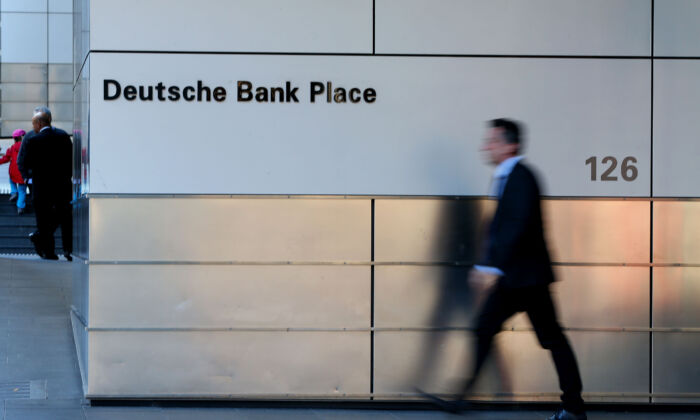 Beijing has not announced the exact date of the meeting, only saying that it will be held in late October.

Amid such sensitive timing, the New York Times published an expose on Oct. 14 detailing how the Germany-headquartered Deutsche Bank bribed senior Party officials in order to gain access to the Chinese market.

The report implicated officials within different Party factions, leading observers to analyze what impact it could have on the political maneuverings during the fourth plenary session.

Deutsche Bank, headquartered in Frankfurt, Germany, is  ranked No. 15 in the latest S&P Global ranking of the world’s 100 largest banks.

It first entered China in 1872, but closed and reopened several times until 1981, when it opened its Beijing office. Deutsche Bank China was founded in 2008. Today, it has offices in major cities throughout China.

The New York Times reported that it received secret documents about Deutsche Bank from Süddeutsche Zeitung, a German media, which documented how the bank developed its businesses in China by sending gifts to senior Party officials, hiring their children and relatives, paying over $14 million to seven “consultants” to secure meetings between top Chinese officials and bank executives, and entertaining officials inside and outside of China.

U.S.-based commentator Tang Jingyuan told The Epoch Times that though the briberies occurred before current Chinese leader Xi Jinping came to power, the involvement of currently sitting officials could be a blow to Xi’s leadership.

Factional infighting remains intense, divided into two main groups: those against and for Xi, Tang explained.

“All people who are familiar with Chinese politics know that Wang Qishan, Li Zhanshu, and Wang Yang are senior officials who are pro-Xi. Jiang Zemin, Wen Jiabao, and Liu Yunshan are retired and anti-Xi,” Tang said.

The Deutsche Bank revelations involving retired officials are less impactful, he said, as the revealed amounts are far lower than the bribes that officials purged under Xi’s anti-corruption campaign were reported to have received.

“But for the current three officials, the report is something,” Tang commented. “People may question whether they are qualified to be a senior official? Whether they received a large amount of bribes? Especially as Xi plans to reorganize the Party at the upcoming fourth plenary session.” Wang in particular previously headed Xi’s anti-corruption efforts until he was appointed vice chair in 2017.

Commentator Zhang Lifan told Voice of America that the New York Times report would likely cause those three sitting officials to keep quiet during the upcoming meeting.

According to Party convention, the fourth plenary is generally held in the autumn after the third plenary session. But the Party held the third plenary in February 2018, leading observers to speculate that the long delay was due to disagreements within the Party leadership about the direction of the country, amid an ongoing trade war with the United States and slowing economic growth.

In August, Beijing finally announced its plans to hold the fourth plenary in October.

Beijing also recently announced plans to draft a new law, called the “Government Officials Political Punishment Bill” on Oct. 8. The law would grant the leaders of regional governments the power to issue administrative punishment against officials directly, bypassing the judicial process. Penalties include firing from one’s position, demotions, decreasing one’s salary, and so on.

Tang analyzed that this bill would allow Xi to fire officials who oppose him during the fourth plenary. Furthermore, “the Deutsche Bank case would give the anti-Xi faction leverage. If Xi fires the anti-Xi officials, they would also pressure Xi to fire the three current officials named in the expose, he said.