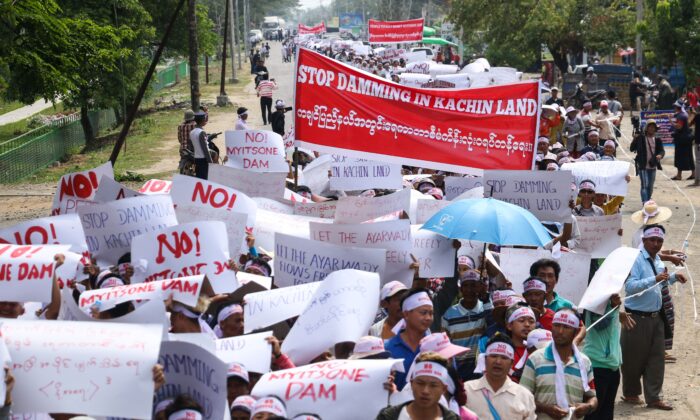 People from Kachin state take part in a protest against the Irrawaddy Myitsone dam project in Waimaw, near the Myitkyina capital of Kachin state, on April 22, 2019. - The controversial dam, a $3.6 billion Beijing-backed project originally designed to supply most of its electricity to China, was halted by Burma in 2011 following protests over environmental and safety concerns. (Zau Ring Hpra/AFP via Getty Images)

MYITKYINA, Burma—The streets of Burma’s capital Naypyitaw were festooned with banners celebrating 70 years of Burma-China relations ahead of the arrival of Xi Jinping on Jan. 17 for his first visit to the Southeast Asian nation as China’s leader.

But for thousands of villagers living in northern Burma (also known as Myanmar) close to the Chinese border, there is another anniversary that nobody can celebrate. It is 10 years since they were kicked off their land for a $3.6 billion dam, an unfinished project backed by Beijing that dogs relations between the two neighbors.

The Myitsone hydropower dam in Kachin state is one many multi-billion dollar infrastructure projects that form part of Xi’s flagship “One Belt, One Road” (OBOR, also known as Belt and Road) initiative. The Chinese leader intends to discuss his grand plan for what has been described as a “21st century silk road” during his two-day visit to Burma.

Construction of the dam was suspended in 2011 after a public outcry over evictions and expected environmental damage, which included the flooding of an area the size of Singapore, but villagers have not been allowed to return home, and Burma’s leader Aung San Suu Kyi has indicated it could still move ahead.

“The major losses were the farmlands,” said Reverend Tu Hkawng, a member of the ethnic Kachin minority, who are mostly Christian, adding that residents had been moved into sub-standard housing provided by China and many had been forced to look for work across the border.

“I would say our social structure was destroyed,” he said. “We used to help and care for each other. Such things are gone.”

An open letter from dozens of Kachin civil society groups published a day ahead of Xi’s arrival called on the Chinese leader to permanently scrap the project and said broader Chinese investment in the region, including massive banana plantations, had a “broad social and environmental impact including land problems and threats to nature and historical sites.”

Chinese investment has “disrespected local traditions and values and failed to consult local people,” it said.

Xi is scheduled to meet state counselor Aung San Suu Kyi and army chief Min Aung Hlaing in the capital Naypyitaw, as well as the heads of minor political parties.

Protesters plan to gather outside the Chinese embassy in Yangon on Saturday to oppose the “exploitation of natural resources” in Burma, including the Myitsone project.

Aung Soe Myint, an activist opposed to the dam, said Suu Kyi should beware of what China offers, or risk being punished at a general election expected in November.

“If Aung San Suu Kyi agrees to it, it would be political suicide,” said Aung Soe Myint.

Burma has had a historically fraught relationship with China, with many people suspicious of Beijing’s clout in its smaller neighbor. But relations warmed after China avoided joining the international condemnation of Burma over the expulsion of ethnic Rohingya Muslims in 2017.

More than 730,000 Rohingya were forced to flee western Burma after a military crackdown the United Nations has said was executed with “genocidal intent,” though the government maintains it was a legitimate counter-insurgency operation launched in response to militant attacks on security forces.

China has defended Burma on the global stage and is viewed as the biggest obstacle to a prosecution of its leaders at an international war crimes tribunal. China is the second biggest investor in Burma, after Singapore.

In an editorial published in Burmese state media on Thursday, Xi said the visit was about “result-oriented Belt and Road cooperation” and move from “the conceptual stage to concrete planning and implementation” of projects like the y-shaped Myanmar-China Economic Corridor, connecting China to the Indian Ocean, which has seen slow progress.

Analysts say while the Kachin state dam may feature in discussions, Burma is unlikely to agree to a full resumption ahead of elections coming up at the end of the year. China’s Yunnan Province, the intended destination of the dam’s electricity, now has a surplus.

Talking to reporters last week, Chinese Vice Foreign Minister Luo Zhaohui said the two sides were in contact over the dam, and any co-operation would be “in line with the long-term plan of the Myanmar side.”