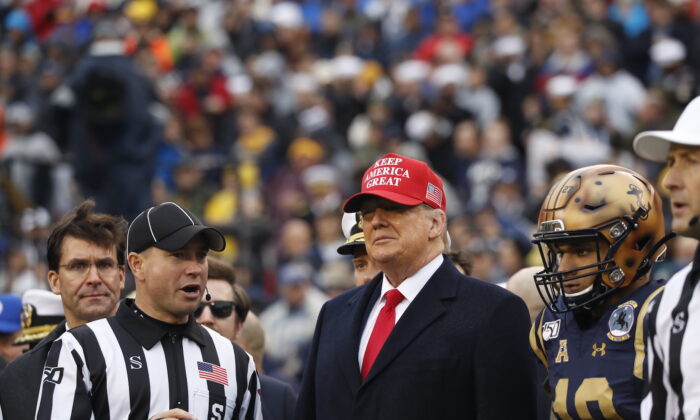 President Donald Trump waits for the coin toss before the start of the Army-Navy college football game in Philadelphia on Dec. 14, 2019. (Jacquelyn Martin/AP)

PHILADELPHIA—During his appearance at the annual Army-Navy football game, President Donald Trump pitched to the players an administration policy change that clears the way for athletes at the nation’s military academies to play professional sports after they graduate and delay their active-duty service.

To cheers in each locker room before the 120th playing of the game, he said he was giving those athletes with pro potential the chance “to make a fortune and after you’re all finished with your professional career, you’ll go and you’ll serve and everybody’s thrilled.”

Turning to Army’s coach, Jeff Monken, the president joked, “It probably gives the coach no reason to ever lose another game.”

A memo signed in November by Defense Secretary Mark Esper spelled out the new guidelines. It said the athletes must get approval from the Pentagon chief and it requires them to eventually fulfill their military obligation or repay the costs of their education. The Obama administration put a policy in place allowing some athletes to go to the pros and defer their military service.

In the Navy locker room, he congratulated the favored Midshipmen on “a hell of a season,” adding, “You know, it’s only a great season, you know it has to happen today, otherwise you wouldn’t call it a great season. So you better go out there and play hard.”

With impeachment looming in Washington, Trump made the day trip to Philadelphia for the second year in a row for the storied game. Trump, who also went in 2016 as president-elect, is the 10th commander in chief to attend the contest.

In 2016, Army snapped Navy’s 14-game winning streak and has won three years in a row. But the Midshipmen entered Saturday’s game as a significant favorite. At 9-2, they ranked 23rd in the nation while Army’s Black Knights had a 5-7 record.

Trump was accompanied by Esper and the chairman of the Joint Chiefs of Staff, Gen. Mark Milley. The president was on the field for the coin toss.

The crowd cheered as Trump walked off the field after the national anthem. He put on a red Keep America Great hat.

Trump emerged during the first half and sat on the Army side of the field, near the 50-yard line. There were shouts of “Trump!” and “Let’s go Trump!” He crossed the field to the Navy side for the second half.

Among the other presidents to attend the Army-Navy game are Barack Obama, George W. Bush, Gerald Ford, and John F. Kennedy.

2019-12-14T19:30:03-05:00
Go Back: US News
Previous: Congresswoman Omar questioned for inaccuracies in reporting small donations to her campaign
Next: US senator asks to declassify documents used by FBI to spy on Trump campaign adviser in 2016
source : www.theepochtimes.com
''

They pay women in Mexico to get pregnant and then abort as part of an experiment
Larwyn’s Linx: The War For The Democratic Party Will Destroy Lives And Change Our Country

US Drug Overdose Deaths Drops for First Time Since 1990

4 Killed, One Injured in Family Shooting in Utah Suburb