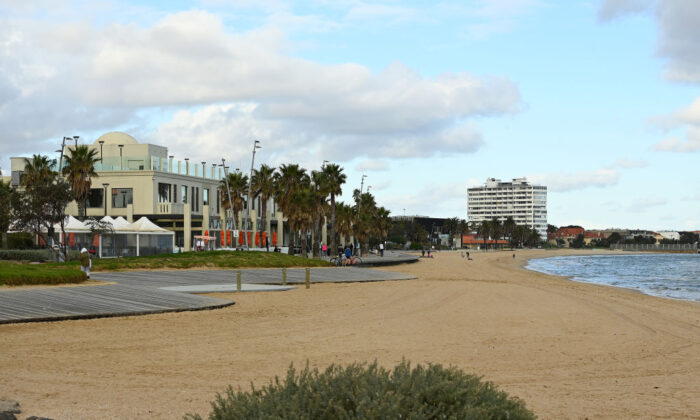 An empty St Kilda Beach on July 13, 2020 in Melbourne, Australia after the city returned to lockdown following the rise in COVID-19 cases through community transmissions. (Quinn Rooney/Getty Images)
Updated: 2020-07-14 11:10:09

Australians have withdrawn  $1 billion from their superannuation (super) retirement funds in the first week of the 2020-21 financial year when the second round of the scheme to get early access opened on July 1. Experts have warned that young people will lose tens of thousands of dollars when they retire as a result.

When interviewed by 2GB radio on July 8, Treasurer Josh Frydenberg said it’s the “people’s money” and ABS payroll data showed that over 55 percent of the spending from funds had gone towards discretionary items, like paying rent; and over 30 percent to paying down loans.

“And obviously that puts people in a better financial position overall,” the treasurer said.

Economists and experts are concerned that fund members dipping unnecessarily into their funds will lose money come retirement.

According to the latest data from superannuation regulator APRA, as of July 5, super funds had made 2.54 million payments worth more than $19.1 billion to their members. The total value of applications received has reached $23.3 billion.

Victoria has become a cause for concern as the fresh outbreaks of COVID-19, the disease caused by the CCP (Chinese Communist Party) virus, commonly known as novel coronavirus, will likely drive the economic cost up even higher.

Young People Will Have to Rebuild Their Savings

Analysis from Industry Super Australia estimated that almost 500,000 Australians have withdrawn nearly all their super funds in the first round, the majority being young people.

“Four hundred thousand people under 35 years-of-age appear to have completely wiped out their super accounts so far and there could well be a lot more,” former Labor leader and chair of Industry Super Australia Greg Combet told ABC Radio National on July 2.

Andrew Charlton, the director of strategy consulting firm AlphaBeta and former government adviser said this was very “concerning,” especially for young people who would lose out on the compounding effect of a longer saving term.

He acknowledged that it was a difficult financial time for people but added that drawing down on retirement savings should be the last resort as this may just be deferring hardship to retirement.

According to data released by illion and AlphaBeta in June, which was based on an analysis of bank transactions, around 40 percent of those who accessed their super were not eligible or had not seen an actual decline in their income.

In response to the concern, ATO has said on July 1 that it will crack down on deliberate exploitation of the system, including withdrawing funds and then recontributing it to the fund to avoid paying tax; as well as withdrawing despite being not eligible.

Those that are found to have accessed super on false pretenses could have the amount added to their taxable income. Serious offenders could face more than $12,000 penalty.

While applicants are not required to submit evidence verifying their eligibility, they are urged to keep all the records for a potential audit.

Go Back: World News
Previous: Romeo &amp; Juliet In Rwanda: How A Soap Opera Sought To Change A Nation
Next: France Scales Down Bastille Day Parade in Concession to Virus
source : www.theepochtimes.com
''