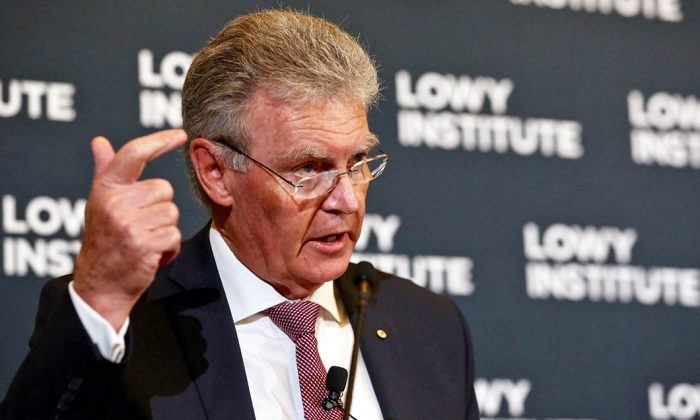 SYDNEY, Australia—Australia’s outgoing spy chief is urging the public to be more conscious and aware of an extraordinary level of foreign spy activity across the country.

Duncan Lewis, the director-general of the Australian Security Intelligence Organisation (ASIO) who is retiring this month, in an address to the Lowy Institute in Sydney on Sept. 4, said: “ASIO assesses that the current scale and scope of foreign intelligence activity against Australian interests is unprecedented.”

“I hope in short-order there will come an increased public preparedness to better defend our country and its sovereignty,” he later said.

Although Lewis did not call out any particular countries for being a threat to national security, he referred to a Lowy Institute poll released in June that focused on public attitudes towards the Chinese regime as well as the federal government’s decision to ban Chinese technology company Huawei from building Australia’s new 5G mobile network in 2018.

The results showed nearly half of survey respondents (49 percent) were worried about foreign interference, representing an increase of 8 percent on poll results from the previous year, he said.

“When asked about the supply of foreign technology into Australia, the poll showed 44 percent of respondents believe the first priority of the government should be protecting Australians from foreign state intrusion,” Lewis said. “This was chosen over the need for better and more sophisticated technology and for keeping prices down.”

Natasha Kassam, a research fellow from the institute’s diplomacy and public opinion program, revealed the Australian public’s growing mistrust of the Chinese Communist Party (CCP) has prompted the government to take a harder line on China.

“The Huawei decision can be seen as one element of a general hardening of Australian policy toward China, at a time where Australians’ trust in China is at historically low levels,” Kassam told Epoch Times in an email. “The revelation that Australian politicians were connected to wealthy Chinese donors led Australia to introduce a foreign influence transparency scheme in 2018 and, in 2019, the Lowy Institute Poll found that almost half of Australians (49 percent) see foreign interference in Australian politics as a critical threat.”

Lewis emphasised there is a stark difference between lawful foreign influence through diplomacy or business transactions and illegal foreign interference that often adopts a more sinister approach that is usually “clandestine, covert and deceptive.” He revealed the harmful effects of espionage can take years or even decades to become obvious.

“Unlike the immediacy of terrorism incidents, the harm from acts of espionage may not present for years or even decades, after the activity has occurred [and] these sorts of activities are typically quiet and insidious and have a long ‘tail,’” he said. “Foreign interference is neither lawful in Australia nor acceptable.”

He noted there has been a great deal of coverage recently in the Australian media about espionage and foreign interference. Epoch Times recently reported concerns regarding foreign interference at the University of Queensland (UQ) where several students who erected a mosaic wall on campus to show their support for the anti-extradition protests in Hong Kong found their work had been damaged by pro-Beijing sympathizers who claimed to be protecting the Chinese consulate.

“A university security guard confronted a few men who were tearing down a Lennon Wall and then refused to show student IDs,” Charles Sturt University ethics professor Clive Hamilton said in an Aug. 28 public presentation at UQ. “When the guard indicated that if they did not, he would call the police, the leader of the three men said, ‘I don’t care if you call the police, I will call the ambassador.’”

The government has responded to such causes by introducing heavy penalties for any individual found to have breached the National Security Espionage and Foreign Interference (EFI) Act and the Foreign Influence Transparency Scheme (FITS) Act that were introduced by the government back in 2018.

“Under the EFI Act, foreign interference offences criminalise conduct engaged in on behalf of a foreign principal that is covert or involves deception, threats or menaces and which seeks to influence a political or governmental process of an Australian government or the exercise of an Australian democratic or political right,” an Australian Attorney-General’s Department spokesperson told Epoch Times in an email. “The maximum penalty under the EFI Act is 25 years’ imprisonment which relates to sabotage offences.”

The FITS Act separately aims to increase the transparency of individuals and organisations who lobby the government on behalf of foreign entities through requiring them to register their relevant activities on the government-funded Foreign Influence Transparency Scheme Register website.

Lewis commended these two new forms of legislation for empowering the government to take tougher action against foreign interference.

An Australian Department of Home Affairs spokesperson told Epoch Times in an email the department has also taken “significant steps” to protect the country’s sovereignty, values and national interests from foreign influence.

Teal is tasked with making Australians more resilient against the threat of foreign interference and better informed to prevent it. He will try to achieve this through engaging with culturally and linguistically diverse communities to help them resist manipulation and coercion from foreign forces. He will also help create a program that responds to foreign interference activities.

The Australian Department of Education is also setting up a task force to protect the freedom of expression at universities countrywide, amid concerns of foreign influence by the CCP.

The University Foreign Interference Task Force will bring together representatives from universities, national security organizations, and the Department of Education.

The new initiative will safeguard freedom of speech and academic freedom for all Australian university students and staff, according to federal Minister for Education Dan Tehan.