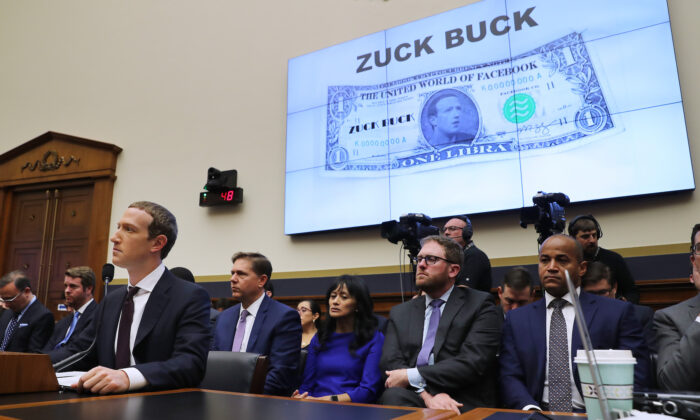 Facebook co-founder and CEO Mark Zuckerberg (L) testifies before the House Financial Services Committee in the Rayburn House Office Building on Capitol Hill October 23, 2019 in Washington, DC. Zuckerberg testified about Facebook's proposed cryptocurrency Libra, how his company will handle false and misleading information by political leaders during the 2020 campaign and how it handles its users' data and privacy. (Chip Somodevilla/Getty Images)

The eight regulators, including the Australian Securities and Investments Commission (ASIC), plan to investigate Libra after the social media giant failed to address concerns about the currency.

There are fears the cryptocurrency could enhance money laundering and expose social media users to more scams and privacy issues.

Regulators met with Facebook executives in the United States in October but weren’t satisfied with the outcome, The Australian reported on Wednesday.

Documents from ASIC published under freedom of information laws and cited by The Australian say Libra poses “many risks and threats” to Australian financial markets.

The Office of the Australian Information Commission, one of the regulators looking into Libra, has suggested the agencies investigate independently.

Other agencies involved include Australia’s anti-money laundering regulator, Austrac, and the Australian Competition and Consumer Commission.

In light of the backlash against the currency, several big companies initially involved have withdrawn, including Paypal, Visa and Mastercard.

Facebook CEO Mark Zuckerberg plans to launch the currency in 2020, allowing Facebook and WhatsApp users to send money to each other, across borders, at low or no cost.

Cybersecurity pioneer, libertarian and independent US presidential candidate John McAfee says even if Libra gets the tick from regulators around the world, he doesn’t believe it will be backed by many consumers.

“Libra is a perversion of the original intent of cryptocurrency which is to free people from financial control,” he told AAP in an interview on Wednesday, ahead of him speaking at the Startcon event in Sydney later this month.

“Libra is merely a cryptocurrency that tells Facebook and therefore the government every single thing about your financial life.

“People will discover very fast, ‘oh my god, using this I get 10 times the number of ads addressed to me’. It will be a nightmare.”