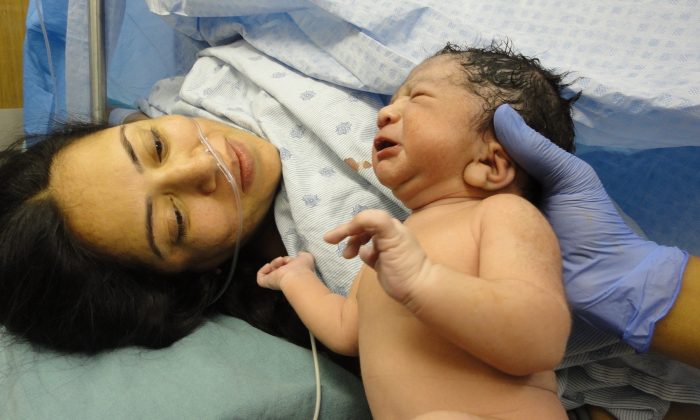 Babies inherit a wealth of beneficial microbes from their mother during natural childbirth. (Pixabay)
Updated: 2019-09-26 02:30:15

LONDON—A huge study of babies’ stool samples has found key differences between infants born vaginally and those born via cesarean section, offering clues about the development of the human immune system, researchers said on Sept. 18, 2019.

Vaginally born babies got most of their gut bacteria from their mother, but C-section babies didn’t and had more bacteria linked to the hospital around them, the study found.

It isn’t clear what impact the difference may have on children’s future health, and the findings shouldn’t deter women from having C-section births, the scientists leading the work said.

But the so-called “baby biome” project—the world’s largest such study—had opened a window on a little-understood stage in the development of human immunity, they added.

“The first weeks of life are a critical window of development of the baby’s immune system, but we know very little about it,” said Peter Brocklehurst, a Birmingham University professor who co-led the study.

“We need to follow up … these babies as they grow to see if early differences in the microbiome lead to any health issues.”

The gut microbiome is a complex ecosystem of millions of microbes and is thought by scientists to be important for how the immune system develops.

Previous research has suggested that a lack of exposure to some microbes in early life is implicated in autoimmune diseases such as asthma, allergies, and diabetes.

But scientists haven’t yet been able to work out how important the initial gut microbiome—or “baby biome”—is to future immunity and health, or how a baby’s microbiome develops, or what happens to it with different modes of birth.

In samples from mothers and from the babies at 4, 7, and 21 days old, the team found there was a significant difference between the two delivery methods, with vaginally delivered babies having many more health-associated bacteria from their mothers than babies born by Caesarean.

In place of some of the mother’s bacteria, the C-section babies had more bacteria typically found in hospitals, the researchers said, and these bugs were also more likely to be drug-resistant.

“At the moment, we don’t understand the long-term consequences of this,” Brocklehurst said at a briefing about the results. “It’s clearly complex and we’re only just beginning to scratch the surface.”

Go Back: Life Style
Previous: The Most Loathed Industry in the US
Next: Pure Fruit Juice: Healthy, or Not?
source : www.theepochtimes.com
''

A doctor and NBC collaborator, documented his battle against the CCP virus. He now admits he never had it