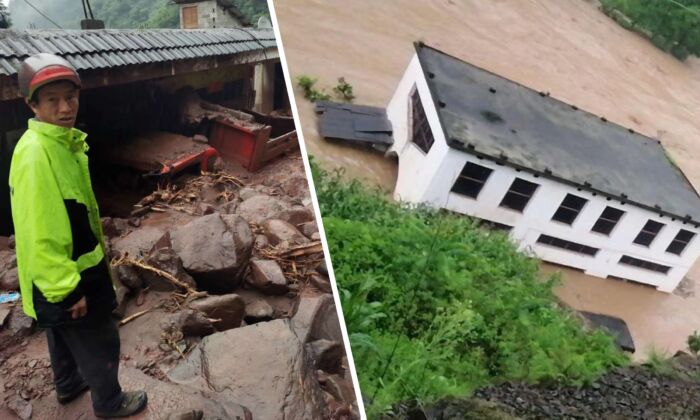 House is inundated by flood water, while a villager stands in front of his mudslide-buried house and truck in Yiliang county, Zhaotong city in Yunnan, China on July 1, 2020. (Provided to The Epoch Times by interviewee)
Updated: 2020-07-02 22:03:03

Heavy rain wreaked havoc in China’s southwestern province of Yunnan on June 29 and 30, causing the water level of the local Baishui river to rise 27 feet (8.24 meters) overnight. Villagers were devastated by the destruction caused by mudslides and floodwaters.

Locals shot videos of the destruction caused by the rainstorm, such as a house collapsing with half of it falling into a river, and vehicles being swept away by floodwaters.

Mr. Du from Zhongchang village, Yiliang county in Yunnan, was roused from his sleep at about 5 a.m. on June 30 after he heard a loud noise. When he got out of bed to check on the commotion, he saw a mudslide that was 50 feet away but moving toward his house.

“I called my wife and four grandsons loudly, and we ran out of the house immediately,” Du told the Chinese-language Epoch Times by phone on July 1. “The mudslide entered my house and buried all the furniture, appliances, and other personal belongings.”

Du said he didn’t know whether anybody would offer help. “I don’t think I will have enough money to build another house for the remainder of my life. Now I just have to find a way to survive.”

China’s state-run People’s Daily reported on June 30 that it was raining heavily in Zhenxiong, Yiliang, Weixin, and other counties in Zhaotong city. From 11 p.m. of June 29 to the morning of June 30, the rainfall reached over 7.87 inches (200mm).

State-run CCTV reported on July 1 that the heavy rain caused the water level of Baishui River to rise dramatically, and submerged buildings situated beside the river.

“This is the worst flooding in the past 50 years,” Mr. Liu from Niujie township in Yiliang county told the Chinese-language Epoch Times on July 1. “The first floor of almost all buildings [in the town] is submerged.”

Liu said he and his fellow villagers were helping each other to save their personal belongings, such as furniture, appliances, clothes, tools, and so on.

Mr. Zhou lives in Luowang township. He told the Chinese-language Epoch Times that the floodwaters in his town reached roughly three feet deep (one meter).

“The worst place in my town is the neighborhood at Luowang street. The floodwater inundated about two-thirds of the street,” Zhou said. “The shops suffered huge losses. About 20 cars were washed away … the excavators and trucks were moved more than 32 feet (10 meters) by the rushing floodwaters and fell into the mud.”

Zhou said electricity and telecommunications were cut off due to the flood on June 30. On July 1, cell phone service returned, but the electricity was not yet repaired.

Mr. Chen from Weixin county in Zhaotong told the Chinese-language Epoch Times: “The river water [in Weixin] is turbulent. A bridge collapsed [as a result of the flood].”

Chen said he and his fellow villagers lost their crops, pigs, and other farm animals.

“Zhaotong is a poor city. Many people do not have good living conditions,” Chen said. “Now people are affected by the flood. The authorities asked us to save ourselves. But how? I can’t understand it.”

This is the second flooding disaster in Zhaotong this year. In the middle of June, Yanjin county suffered heavy flooding. According to social media posts, some people from Pu’er township in the county witnessed their loved ones being swept away by floodwaters and couldn’t save them.

However, local authorities and state-run media did not report any deaths.

Bank Run in Northeast China Part of a Trend

Universities Round the World Fail to Stand up to China: Report

'Everyone Should Update Their Understanding of China': Taiwanese Diplomat