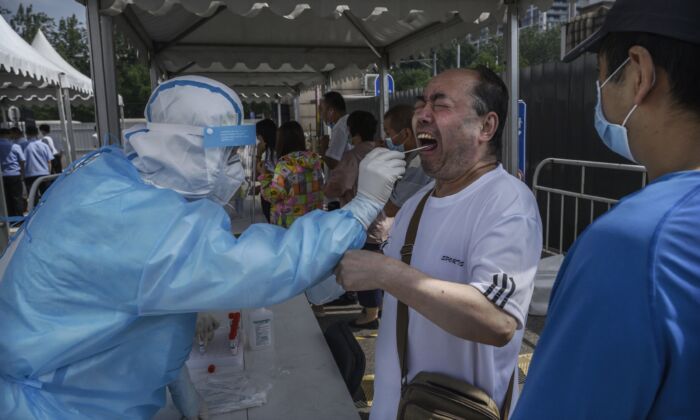 After a Beijing woman was notified of her positive CCP virus diagnosis while she was at a shopping mall, the facility was placed under lockdown. Thousands of shoppers were stuck for several hours.

Authorities also confirmed that at the Orient MGM International Hotel, which was converted into a makeshift quarantine center, a cluster outbreak occurred among those isolated inside.

Beijing requires that people who are close contacts of diagnosed patients stay at such centers at their own expense.

Since the virus resurgence in mid-June, authorities issued strict rules to contain the spread, disrupting the daily lives of many residents.

Cheng Yang, a Beijing resident who was isolated at a quarantine center in Nanyuan township, Fengtai district, was transferred to another hotel on June 28.

Authorities did not provide a reason, but he and others at the hotel suspect that it was because an outbreak had occurred.

He was nervous about potentially contracting the virus, and also felt hopeless because authorities isolated him without providing a release date. “If some of us in this hotel test positive on the 28th day [of quarantine], we will all have to be isolated for 14 more days again,” Cheng said.

Meanwhile, government documents that were leaked to The Epoch Times revealed that Beijing authorities were still investigating how this recent virus outbreak spread.

On July 2, Ms. Xie was having lunch at Wanda Plaza. At about 12:50 p.m., Xie received a phone call from the China-Japan Friendship Hospital, informing her that she was diagnosed with COVID-19, according to local media reports.

Xie was shocked and began to cry loudly at the restaurant where she was dining.

About ten minutes later, the district health commission locked down the shopping mall and forbade all staff who work inside to leave. Shoppers who wished to leave had to fill out a form.

Hundreds of people queued up to leave the mall.

Owners of several businesses inside the mall told the Chinese-language Epoch Times that authorities kept giving them orders.

“They [authorities] asked us to disinfect the store and convince all customers to leave after 1 p.m. They asked us to stop all disinfecting at about 2:30 p.m. because they would pick up [environment] samples from shops. They then asked all people who work inside to take nucleic acid tests at about 3 p.m. In the middle of that, people leaving work were also told to take tests,” a business owner explained.

“We are locked inside. Nobody is allowed to enter or leave Wanda,” a saleswoman at a ZARA store said.

Most of the interviewees expressed that they were nervous about the latest outbreak, and worried that their cell phone-generated healthcode would change to yellow or red, which means they are close contacts of a diagnosed person and have to be isolated.

State-run newspaper Beijing News reported that the mall was closed at the end of the day. Authorities also identified some of Xie’s close contacts and sent them to quarantine centers.

Chu Junwei, acting head of the Fengtai district government in Beijing, confirmed at a June 28 press conference that there was an outbreak at the Orient MGM hotel.

“Two people are isolated in one room. It’s possible we infected each other,” said Wang Chunqi, a Beijing resident who was quarantined at the hotel.

All who are isolated are not allowed to ever leave their rooms. “[The government staff] didn’t let us go out the door… It’s like being in prison. Also, the food [they provide] makes me nauseous,” he told the Chinese-language Epoch Times in an interview.

Authorities initially claimed that salmon sold at the Xinfadi food market in Beijing was the culprit behind the virus outbreak, then beef and lamb.

The Epoch Times obtained, via a trusted source, a copy of a notice issued by the Daxing district health commission in Beijing, titled, “Set Up Teams Urgently to Investigate High-Risk Groups Related to the Xinfadi Market” on June 28.

The commission requested that each hospital set up five investigative teams and each small clinic set up three teams. These working teams will go to the homes of ‘high-risk” people, pick up swabs from residents and home environments, as well as people’s blood samples.

Then all swabs and samples will be tested by the district CDC and recorded into authorities’ mass surveillance system.

The document did not explain who belonged to the high-risk groups, but since mid-June, authorities quarantined all vendors at the Xinfadi market, and mandated all residents who had visited Xinfadi since late May to take nucleic acid tests.