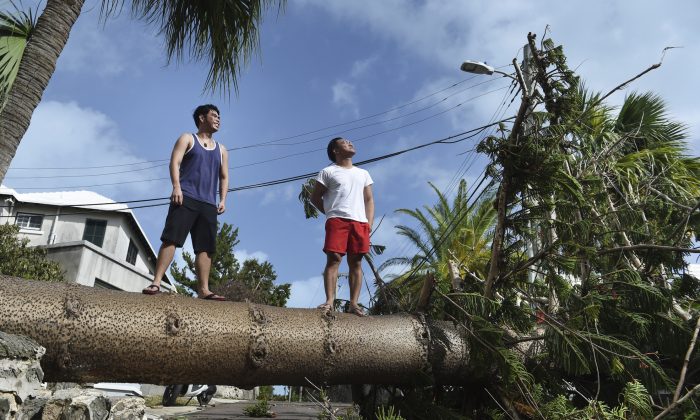 HAMILTON, Bermuda—Cleanup crews in Bermuda were busy at work on Sept. 19 after Hurricane Humberto grazed the island, which escaped major harm despite winds that reached around 100 mph, snapping power poles and lifting off roofs.

Debris including power lines littered roads, and dozens of homes lost parts of their roofs, a Reuters witness said.

“We have come through a really, really challenging night. Our country was resilient,” National Security Minister Wayne Caines said in a radio message.

The Bermuda Fire and Rescue Service said it attended to three structural fires and 17 hurricane-related fires, helped with 20 damaged roofs, and prevented a boat from sinking.

One fire service vehicle was rendered unusable after a tree fell on it.

As of noon local time, some 25,000 of the island’s 38,000 electricity customers remained without power, while 5,000 customers have already had their electricity restored, Caines said.

The airport was reopened and flights are resuming, and a bridge to the airport was also opened after an assessment showed there was no structural damage.

Schools will remain closed on Sept. 19 and Sept. 20, while government offices are scheduled to reopen on Sept. 20.

“Humberto is still a powerful hurricane, but the system is in the process of transitioning to an extratropical cyclone,” the NHC said.

“Large swells and dangerous surf generated by Humberto will continue along the coast of Bermuda during the next day or two, and these could continue to cause coastal flooding.”

The swells are forecast to continue affecting the northwestern Bahamas and the United States coast from east-central Florida to the Mid-Atlantic states during the next couple of days.

The Atlantic storm season has picked up pace in recent weeks.

The Bahamas is still reeling from the devastation of Hurricane Dorian. In the United States on Sept. 19, all flights into Houston’s international airport were halted as Tropical Depression Imelda inundated southeastern Texas with heavy rains and triggered flash flood warnings.

Connecticut manhunt underway for suspect in 2 killings, assault
US cruise ship performer stuck in Barbados amid coronavirus thanks Rep. Nunes for helping bring him home
Jane Horton, Joe Kent: Congress it's time for a lasting memorial to the Global War on Terror