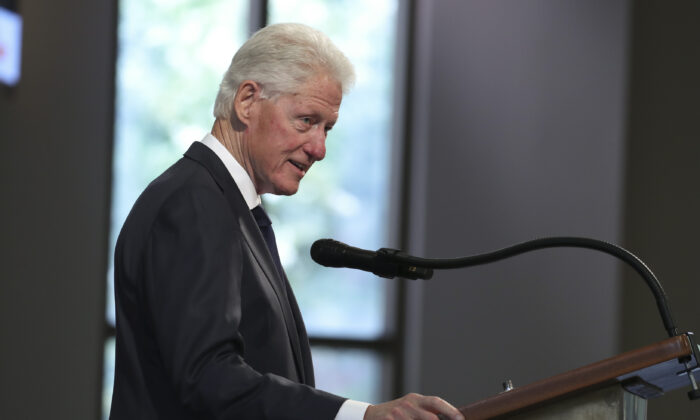 Former President Bill Clinton through a spokesperson denied being on Jeffrey Epstein’s island, following the release of documents that showed an alleged Epstein victim saying she saw Clinton there.

Virginia Roberts Giuffre, 36, accused Epstein, who was convicted of soliciting prostitution of minor girls in 2008, of sexually assaulting her numerous times, with the help of his one-time girlfriend Ghislaine Maxwell.

Giuffre told one lawyer that she remembered Clinton being present on Epstein’s plane.

“The majority of the girls that Jeffrey actually met or had on his plane or in his house were underage,” she said.

Epstein told Giuffre that lots of people owed him favors. He also said that he helped people for the sole purpose of having them owe him afterward. “He told me a long time ago that everyone owes him favors. They’re all in each other’s pockets,” she said.

Asked whether Epstein told her that Clinton owed him favors, Giuffre said she did remember that but wasn’t sure whether Epstein, who reportedly killed himself in jail while awaiting trial on child sex trafficking charges, was joking.

“Yes I do. It was a laugh though. He would laugh it off. You know, I remember asking Jeffrey what’s Bill Clinton doing here kind of thing, and he laughed it off and said well he owes me a favor. He never told me what favors they were. I never knew. I didn’t know if he was serious. It was just a joke,” she said.

By here, Giuffre said she was referring to Epstein’s infamous 70-some-acre island in the Caribbean, dubbed Little Saint James and also known as Little St. Jeff’s. Locals knew it as “pedophile island.”

When Epstein and Clinton were on the island together, Maxwell—recently arrested for allegedly grooming minor girls for Epstein to abuse—was also there, as were two young girls from New York, Giuffre said.

U.S. District Judge Loretta Preska in late July ordered the unsealing of the new documents, which were part of a civil lawsuit that Giuffre filed against Maxwell.

Clinton spokesman Angel Urena said in a statement on social media: “The story keeps changing, the facts don’t. President Clinton has never been to the island.”

In a separate statement to Newsweek, Urena said Clinton has “never been to Little St. James Island.”

“He’d not spoken to Epstein in well over a decade,” he added. “Well before his terrible crimes came to light.”

Epstein visited the White House multiple times while Clinton was in office, according to files from the Clinton Library, and flew on Epstein’s plane a number of times after leaving office. The flights included underage girls, an investigative journalist said. A portrait of the former president was found in Epstein’s New York mansion.

Urena said in a statement last year that Clinton was unaware of Epstein’s “terrible crimes.” The plane rides included Clinton’s Secret Service detail and staff and supporters of the Clinton Foundation, he alleged.

Clinton also visited Epstein twice in New York City, and a former Clinton aide was among those at a dinner at Epstein’s home in 2010.

An ABC anchor was captured on internal video in 2016 saying executives “quashed” a story that featured an interview with Giuffre.

“It was unbelievable what we had. [Bill] Clinton, we had everything. I tried for three years to get it on to no avail, and it’s like these new revelations, and I freaking had all of it,” she said.

In a conversation with another lawyer that was part of the newly unsealed documents, Giuffre said Maxwell told her that she flew Clinton to the island on a helicopter. She said she wasn’t sure whether Maxwell was telling the truth, explaining: “Ghislaine likes to talk a lot of stuff that sounds fantastical.”

Different details from Giuffre discussing the helicopter were unsealed in 2019. Giuffre said at the time that Maxwell flew Clinton in a black helicopter that Epstein had bought Maxwell but stressed she didn’t personally witness Clinton being flown to the island.

The relevant parts can be found on pages 144 to 153 and 290 in a compilation Law & Crime created of all of the unsealed documents.