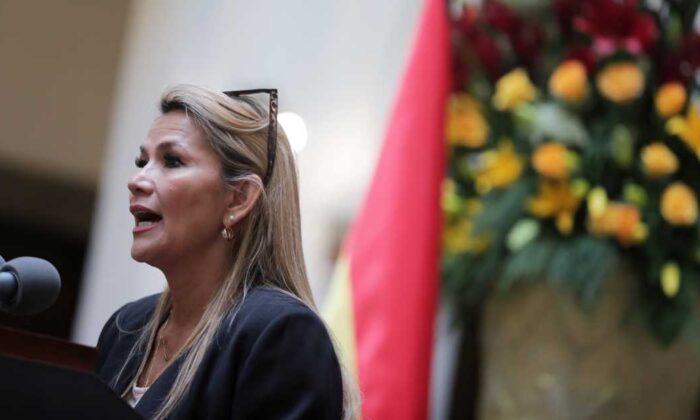 LA PAZ—Bolivia’s interim president said on Nov. 14 that Evo Morales wouldn’t be welcome to take part in new elections after the long-standing leftist leader resigned and fled to Mexico amid rising pressure over vote-rigging allegations.

Jeanine Áñez, 52, who took over on Nov. 12, is battling to bring calm to a sharply divided Bolivia that has been rocked by protests since the Oct. 20 election, which was won by Morales but marred by widespread allegations of fraud.

Morales resigned on Nov. 10 after an audit found electoral irregularities and the military withdrew its backing, urging him to step down to help restore calm to the country. Morales and Vice President Alvaro Garcia, who also resigned, are now in Mexico, which offered them asylum.

“Evo Morales does not qualify to run for a fourth term. It’s because [he did] that we’ve had all this convulsion, and because of this that so many Bolivians have been demonstrating in the streets,” Áñez told a news conference on Nov. 14.

The conservative former senator said Morales’ Movement for Socialism (MAS) party, which has a majority in Congress, was welcome to participate in the vote.

“They should start searching for a candidate,” she said.

Áñez didn’t give a specific date for the election, but under the constitution, she has 90 days to do so since declaring herself interim leader by invoking the constitutional line of succession.

Meanwhile, Áñez has appointed a new military chief and cabinet members, while MAS lawmakers seem to have backed away from plans to try to nullify her interim appointment.

Russia, a key ally for Bolivia under Morales, said it would work with Áñez while pointing out she hadn’t been formally sworn in.

The United States, Brazil, Colombia, and Britain have also recognized Áñez. Other governments in South America, including neighboring Peru and Argentina, have so far held off.

Morales, in power since 2006, defied term limits and a 2016 referendum against lifting them by running for office this year, after a Bolivian court packed with loyalists gave him a green light to run indefinitely, citing his “human rights.”

In protests since the October vote, at least 10 people have been killed, the public prosecutor’s office said, mostly by projectiles from firearms.

Morales, writing on Twitter from Mexico, has called for dialogue to help “pacify” Bolivia, asking the United Nations and the Roman Catholic Church to help find a solution.

In an interview with Spanish daily El Pais published on Nov. 13, Morales said he was still legally president because his resignation hadn’t yet been accepted by the legislature, but added he considered Áñez the de facto leader and suggested he wouldn’t try to run in the next election.

Go Back: World News
Previous: ‘I don’t think I’m a hero,’ SUV driver risked his safety to save pedestrians
Next: Italy Declares State of Emergency in Venice After High Tides
source : www.theepochtimes.com
''