Boris Johnson out of COVID-19 Isolation After 2 Weeks 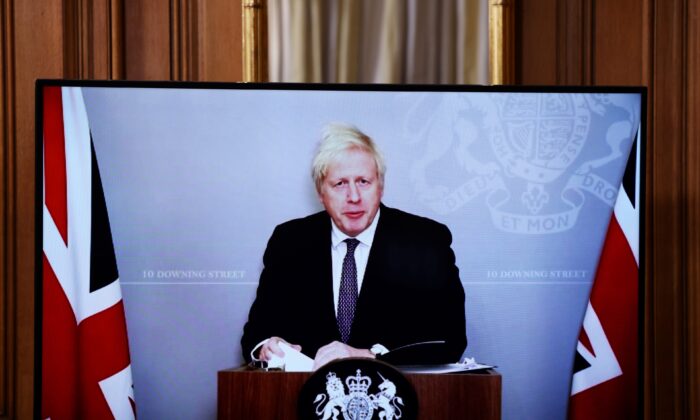 British Prime Minister Boris Johnson has ended his self-isolation two weeks after coming into contact with a Conservative MP who later tested positive for the CCP virus.

Later on Thursday, Johnson will chair a cabinet meeting and then give a news conference to explain local restrictions which will be put in place after England’s month-long COVID-19 lockdown ends on Dec. 2, Chancellor of the Exchequer Rishi Sunak told the BBC.

The prime minister was forced to go into self-isolation after attending a 35-minute meeting on Nov. 12, which was also attended by Lee Anderson, MP for Ashfield in Nottinghamshire, who later tested positive for the CCP (Chinese Communist Party) virus, which causes COVID-19.

In a video posted on Twitter on Nov. 16, Johnson said he felt “great,” was “fit as a butcher’s dog” and “bursting with antibodies,” but would “follow the rules” and self-isolate for 14 days.

Downing Street said on Nov. 17 that Johnson had tested negative for the CCP virus, but would finish the two-week self-isolation according to government guidance.

This was Johnson’s second brush with the virus. The first was in March when he did develop symptoms and his deputy Dominic Raab temporarily took over the prime minister’s responsibilities. After initially continuing to work, Johnson was ultimately admitted to intensive care in April for three days and given oxygen, but not ventilated.

On Tuesday, Johnson, who was then still self-isolating, told a press conference from 10 Downing Street that if people stick to post-lockdown restrictions and seek tests when needed “things will look and feel very different indeed after Easter.”

He said an end goal date was in sight following the “fantastic news that the Oxford/AstraZeneca vaccine has been highly effective in clinical trials.”

“That idea of an end goal date is important, because at last if the promise of the vaccines is fulfilled we do have something … our businesses can begin to plan.”

He added that with hard work, the hope is to “inoculate the vast majority of the people who need the most protection by Easter. That will make a very substantial change to where we are at the moment.”

Mary Clark and Reuters contributed to this report.

Australian Open to Stick to Schedule Despite Hard Quarantine