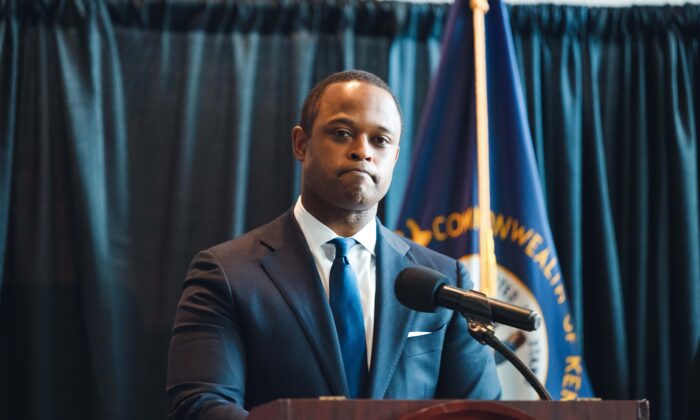 A group of Kentuckians that includes three grand jurors from the Breonna Taylor case on Friday filed a petition to impeach Kentucky’s attorney general.

According to a press release announcing the petition, Attorney General Daniel Cameron, a Republican, incited an insurrection by financing, directing, and/or permitting robocalls that called for marching to the U.S. Capitol on Jan. 6.

A group linked to the Republican Attorneys General Association sent the robocall that said, in part, “we will march to the Capitol building and call on Congress to stop the steal.” Cameron told reporters recently that he was not aware of the robocall, which did not call for violence.

Former President Donald Trump was impeached this month for incitement of insurrection over a speech he gave on Jan. 6. Trump had not finished speaking before violence began at the Capitol, eventually culminating in forced entry into the building, the destruction of various rooms, and theft of items including several computers.

The new petition against Cameron also claims he breached public trust and failed to comply with his duties “for misrepresenting to the nation the findings of the Grand Jury.”

Cameron presented the findings of the Taylor grand jury to the public in September 2020. The grand jury indicted one of the three police officers involved in the raid on Taylor’s apartment but could not charge the other two because their use of force was justified, according to Cameron.

Officers raided the house in March 2020. They fired their weapons after Taylor’s boyfriend, Kenneth Walker, shot a gun, striking Sgt. Jon Mattingly. Taylor was mortally wounded during the incident.

Activists and Taylor’s family took issue with the way the findings were presented, arguing the grand jury was not given the opportunity to properly review the case. Riots broke out. Cameron later agreed to comply with an order to release grand jury transcripts under pressure from the family and others. And the Louisville Metro Police Department released over 4,000 pages from its investigation into the shooting, showing in depth what happened.

The files showed that the narrative of a no-knock warrant being served was wrong, as officers had announced themselves and banged on the door before barging inside when no one answered. They also highlighted how Walker believed he was unfairly treated by the police.

Walker was charged with attempted murder of a police officer but the charge was dropped several months later.

Cameron’s office didn’t respond to a request for comment to the new petition.

“The Grand Jurors did not choose this battle,” Kevin Glogower, representing the group seeking the impeachment, said in a statement. “This battle chose them. These are randomly selected citizens who were compelled to sit on a grand jury and were terribly misused by the most powerful law enforcement official in Kentucky. It is truly a testament to the Kentucky Constitution that they are able to be here today and to expose injustice and demand public accountability.”

Taylor family attorney Benjamin Crump said in a statement that the House committee should “seriously review this petition and hold AG Cameron accountable for his role in misleading the public and the grand jurors, and denying justice for Breonna Taylor and her family.”

House Speaker David Osborne, a Republican, said in a statement that notice of the petition was received, adding that he would “reserve further comment until our attorneys review it and the committee on committees has an opportunity to act.”

Two other impeachment petitions have been filed in Kentucky this month. Separate groups filed petitions against Gov. Andy Beshear, a Democrat, and state Rep. Robert Goforth, a Republican.

Follow Zachary on Twitter: @zackstieber
Go Back: US News
Previous: White House Press Secretary Says She Hasn’t Spoken With Biden About Riots in Portland and Seattle
Next: Democrats: Yeah, don’t get your hopes up for that immigration bill
source : www.theepochtimes.com
''