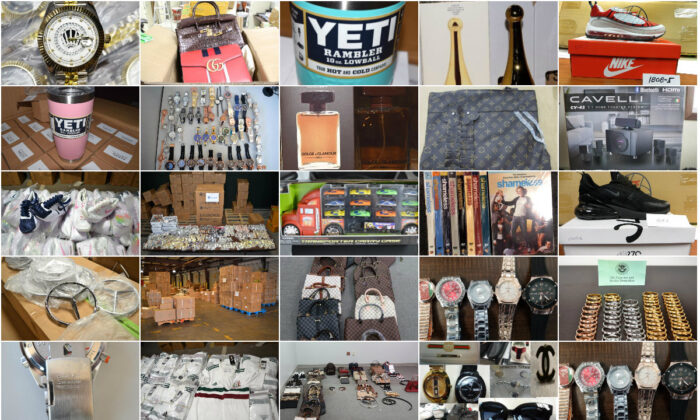 Brown’s company isn’t large enough to pay for sophisticated software services to take down knockoffs on platforms like Amazon and eBay. Instead, he hires a part-time employee to hunt for counterfeits and get the platforms to take them down. The effort results in 20 take-downs per week. Many more remain.

While small, made-in-America companies like Loggerhead Tools represent a tiny fraction of the businesses struggling against a flood of counterfeits online, they are the most vulnerable. The investment in inventing and manufacturing at home makes it difficult to compete with cheap sweatshop knockoffs which can reach the United States from China at a fraction of the cost of domestic shipping.

The administration of President Donald Trump began to take action on the issue in 2018 by initiating a one-year withdrawal process from the Universal Postal Union (UNU) in a bid to force the union to change its rules, which afforded China cheap international shipping rates. The pressure tactic succeeded and the United States will begin to set its own rates in July.

But the UPU loophole was only one in a complex system of shippers, warehouses, and online marketplaces exploited at all stages by counterfeiters. Trump moved to plug the gaps last year, ordering agencies to prepare a report on how to address the flood of counterfeits online. The Department of Homeland Security released its report and recommendations in January. The White House set some of the recommendations in action days later, drawing praise from business owners and industry groups.

“I am happy to see that the administration is taking this seriously and that they’re focused on this because this is a major issue for small businesses,” said Brown.

The report and the executive order feature an extensive array of tools designed to plug the loopholes currently exploited by counterfeiters and expand the responsibility to all parties who reap a profit from facilitating the journey of counterfeits to American consumers.

In addition to providing an action plan for the government, the DHS report calls on online marketplaces to ramp up their counterfeit enforcement and outlines immediate steps the platforms can take to stem the tide of knockoffs. These include tougher vetting of third-party sellers, limitations on high risk-products, and implementing rapid procedures for removing knockoffs and notifying all of the parties involved.

Trump’s executive order put several of the measures proposed in the DHS report into action, including calling for the creation of a metric to determine which international postal systems fail to adequately vet counterfeits. Posts which repeatedly fail to meet the metric would face increased scrutiny and may, if the non-compliance continues, be blocked from shipping to the United States entirely.

“I think they did an excellent job and I liked the pragmatic approach that they take to this,” said Donald Dinan, an adjunct professor of law at Georgetown University specializing in international trade law and intellectual property law.

“There’s some real, concrete stuff in it as opposed to a lot of these government reports in which they moan and groan and that’s about it,” Dinan said.

One of Dinan’s clients, Jayme Smaldone, is the inventor of the Mighty Mug, a dual-patent mug which uses a suction cup to prevent accidental spills. The Mighty Mug is relentlessly knocked off by counterfeiters in China.

Under current law, Customs and Border Protection (CBP) can only seize goods which bear infringing trademarks, but not products which violate design patents. Dinan helped The Mighty Mug obtain an exclusion order from the U.S. International Trade Commission. The order enables CBP to seize counterfeits which infringe on a design patent.

The design patent loophole can only be addressed through legislation. Sen. Thom Tillis (R-N.C.) introduced a bill in December that would plug the gap.

Smaldone thinks the latest actions by the administration will prompt the intermediaries involved to take action.

“I think it’s really interesting, particularly the fact that they’re looking to put more people in the line of fire, not just the importer of record, not just the shipper,” Smaldone said. “I like that idea. You have to be heavy-handed sometimes.”

Smaldone’s 14-person team does not have the manpower to tackle the volume of counterfeits. Instead, the company hired Red Points, a software service which tracks down counterfeits across multiple online marketplaces. Smaldone now spends 10-15 minutes per day reviewing the flagged listings and choosing which should be taken down. Red Poinds handles the rest.

Alibaba.com carries the largest number of Mighty Mug knockoffs, Smaldone said, followed by AliExpress, eBay, and Wish. While Alibaba is good at taking down counterfeits once notified, Amazon “is a complete nightmare,” Smaldone said.

Dan Shapiro, the director of global strategic partnerships at Red Points, said the attention brought by the administration to the issue is a boon for the private-sector companies who help brands protect against counterfeits.

“We think that more awareness is very positive for our industry,” Shapiro said.

The footwear and apparel industries topped the list of CBP’s intellectual property rights annual seizure statistics in fiscal year 2018, making up 32 percent of all goods seized at ports of entry.

Footwear counterfeiters are executing increasingly sophisticated schemes to smuggle the knockoffs into the United States. Some are shipping brand labels separately from shoes and attaching the labels when both shipments cross the border. According to Matt Priest, president of Footwear Distributors and Retailers of America, the footwear companies lose hundreds of millions of dollars to counterfeits every year.

“In spite of all of our challenges on the trade side with the administration, this has been an area that they’ve focused on and prioritize that we’ve been very happy about,” Priest said.

“I think we’re at a stage where by no means is any of this solved, but we have the administration focused on it, we have the agencies tasked to work on it,” he added. “I think we have the attention of all the right people, most importantly, probably, the attention of the platforms themselves because a little bit of sunlight, a little bit of scrutiny from the federal government, is always a nice kind of elixir to help us try to combat the free flow of counterfeit goods on eCommerce websites in particular.”

The threat of counterfeits is wide-ranging. Knockoff semiconductors have made their way into Air Force weapons systems and U.S. Navy nuclear submarines. Counterfeit water filters fail to last as long as required by certification standards and add harmful compounds to clean water in excess of the the total allowable concentration limits that are considered safe. Knockoff first-responder flashlights may fail at a critical time.

The Organisation for Economic Cooperation and Development estimated that the amount of counterfeits traded globally increased $200 billion in 2005 to $509 billion in 2016. The number of CBP seizures increased tenfold to 33,810 from 2000 to 2018.

“Any measures that we can take that specially help any of our companies in preventing counterfeit goods entering into the U.S. are a good thing,” said Daniel Staudt, the president of the Intellectual Property Owners Association. “Everything that’s been drafted has been very good. But the implementation is always going to be the key.”

The Department of Homeland Security did not respond to questions about the work being done to carry out the plan in the DHS report and Trump’s executive order.

Follow Ivan on Twitter: @ivanpentchoukov
Go Back: US News
Previous: Grandfather of Toddler Who Died During Cruise Ship Fall to Plead Guilty
Next: 5 Teens Charged With Capital Murder in Mississippi Over 16-Year-Old Girl’s Death
source : www.theepochtimes.com
''