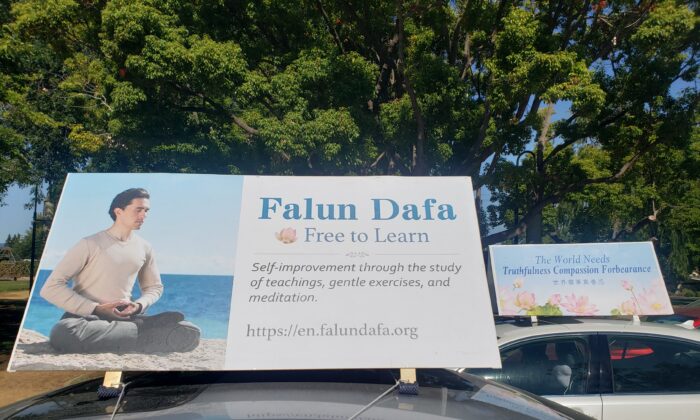 PALO ALTO, Calif.—On the morning of Aug. 1, practitioners of the Chinese spiritual discipline Falun Gong gathered on the grassy fields of Mitchell Park to do exercises together before embarking on a four-hour car tour.

They meditated and did slow-moving exercises to gentle music. A table with flyers, lotus flower charms, and petition sheets was set up in front of them.

The purpose of the gathering was to raise awareness that the Chinese Communist Party (CCP) has been violently persecuting Falun Gong in China for the past 21 years.

In previous years, practitioners held in-person parades and rallies in San Francisco. This year, due to the pandemic, organizers decided to hold car parades in various places in the San Francisco Bay Area.

Falun Gong, also called Falun Dafa, includes five meditative exercises as well as moral teachings based on the principles of truthfulness, compassion, and tolerance. Practitioners strive to improve themselves by living according to these principles in their daily lives.

The tour on Aug. 1 consisted of 17 cars, with signs attached to 16 of the car roofs. The signs called for an end to the persecution. The tour drove through Mountain View, Palo Alto, and Menlo Park, making a total of eight stops.

Erica Lewis, a registered dietitian, saw the event in the park and told The Epoch Times that she is empathetic and understanding toward those who are being persecuted. She was attending a Barre3 studio outdoor class at Mitchell Park, and she was worried that the workout’s fast-paced and loud music might conflict with the practitioners; however, the practitioners exercised peacefully through it.

Changpin Liu and Jie Guo, who are husband and wife, told The Epoch Times they were persecuted for practicing Falun Gong in China. They were held captive at the Masanjia Labor Camp in Liaoning Province.

Guo said she was forced to work in the labor camp twice. Liu was sent there three times.

Falun Gong became enormously popular in China in the 1990s. According to Faluninfo.net, hundreds of people could be seen doing the Falun Gong exercises in public parks every morning at that time.

The CCP initially endorsed the practice and its health benefits. However, the practice’s vast and growing popularity was viewed by the CCP as a threat to its power. On July 20, 1999, the communist regime launched a nationwide campaign to eradicate the practice.

“It was really tough to recall the hard times. The cops were just like the devils in hell,” Liu said.

Liu said that Falun Gong practitioners were forced to make products at the camp, normally working over 10 hours.

They had to get up around 5 a.m. and work until 9 p.m., or sometimes even 11 p.m. if they couldn’t finish the job. Many of the labor workers couldn’t move their fingers due to injury.

Guo said that four people had to share the same queen-size bed and couldn’t move when they were all on it.

There were another eight people who slept on the ground. During the summer, many people became sick and had skin diseases.

Guo and Liu have practiced Falun Gong since 1997, and they came to the United States in 2016.

When they were still in China, they had to leave their house in Liaoning Province and wander in the countryside. However, they couldn’t find safety anywhere in communist China, so they went to a country in Southeast Asia before coming to the United States.

They said they enjoy their freedom here, and they no longer have to worry about being arrested by police for no reason.

They described how police in China tortured practitioners to try to force them to renounce their beliefs. One form of torture involved stretching the person’s arms, and another involved forcing the person to sit on a small chair for long periods of time.

“You cannot move a little bit—just sitting on that small chair,” Guo said.

A documentary titled “Letter From Masanjia” depicting life at the labor camp was released in 2018.