CCP Virus Deaths in Spain Near 14,000 as Pace Ticks Up 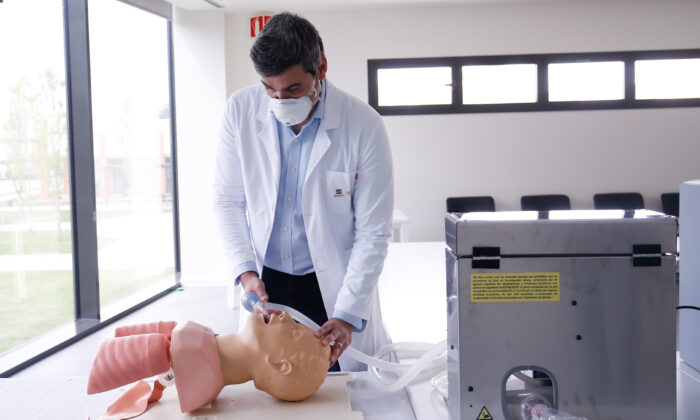 A member of the medical service of Spanish automobile manufacturer SEAT checks a ventilator manufactured at the company's factory in Martorell near Barcelona, on April 7, 2020. (Pau Barrena/AFP via Getty Images)
Updated: 2020-04-07 09:12:47

Deaths from the CCP virus-caused COVID-19 disease in Spain neared 14,000 on Tuesday as the pace of deaths ticked up for the first time in five days.

Spain, one of the hardest-hit countries in the world, recorded 743 deaths overnight, bringing the total to 13,798.

Spain’s official death toll is the second-highest worldwide, but official reports from China and Iran are believed to be severely manipulated.

While the 5.7 percent increase was slightly above that of Monday’s, the proportional daily increase was still just half of that reported a week ago.

Maria Jose Sierra, deputy chief of health emergencies, said in a statement that oscillations are normal. “What matters is to see the trend and the cumulative data,” she said. The latest data included some delayed notifications from the weekend, she added.

Some 63,093 patients have been hospitalized, of whom 7,069 are in intensive care units, both small increases from Monday. Spanish authorities also said the total number of confirmed cases climbed by over 5,000 to 140,510 in a nation that once saw a daily increase in cases of 22 percent.

Most of the new deaths were in Madrid and Catalonia, Spain’s most affected regions.

A lockdown implemented last month has Spaniards holed up at home except for essential trips. For restrictions to be lifted, officials say testing has to be widened, to find carriers who may have mild or no symptoms.

A growing body of evidence points to infected people being able to pass on the CCP (Chinese Communist Party) virus, commonly known as novel coronavirus, even if they’re not showing symptoms. Up to one in four patients will never show symptoms, American authorities have said.

Spain’s government is planning mass, quick antibody tests in coming days. Cadena Ser radio said about 62,000 people would be tested twice with an interval of 21 days to see the effect of any easing of measures on contagion.

The Ministry of Health said Tuesday it acquired five million rapid antibody detection tests and started distributing more than one million of them. The tests will primarily be used at nursing homes, health centers, and hospitals. The tests will be used in conjunction with standard PCR tests.

Hospitals in various areas reported a drop in severe cases after the influx in March caused severe overloads. Only 138 new patients were admitted to intensive care units nationwide overnight.

Mari Angels Rodriguez, a nurse at the Hospital Josep Trueta hospital in Girona in northeastern Spain, said the volume of work in the intensive care unit had fallen “a lot.”

“The collapse in the first few days was brutal, everyone was coming to emergency services, all the usual causes as well as all the possible cases of COVID-19,” she told AFP. “What wears me out the most is seeing young and middle aged people, without chronic conditions, who arrive in moderate shape and quickly end up in the intensive care unit.”