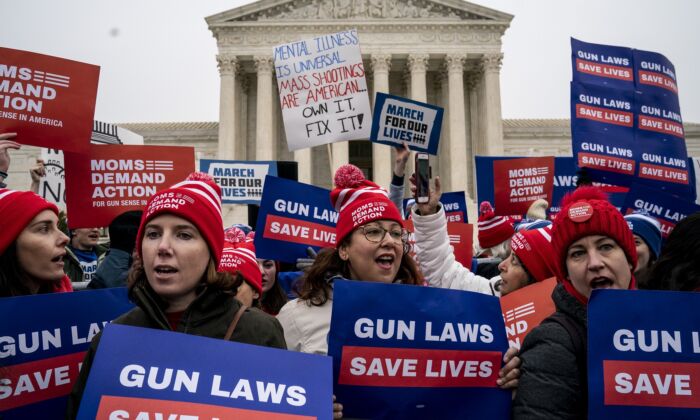 WASHINGTON—The outcome of a Trump administration-backed challenge to New York City’s uniquely restrictive gun laws that make it burdensome for law-abiding gun owners to transport their weapons is in doubt after the Supreme Court heard oral arguments in the case on Dec. 2.

Critics have long complained about what they say are the tough, inflexible licensing rules for guns in New York City. They say many rules seem petty, enforced with undue rigidity, and calculated to inconvenience, or even harass, gun owners in an effort to discourage them from using their Second Amendment rights in a city known for its hostility to private firearms ownership.

The hearing came at a time of heightened tensions about gun rights. Some Democratic presidential candidates espouse crackdowns on gun ownership, including confiscation. In August, five Democratic senators filed a brief in the case threatening unspecified retaliation against the court if it failed to “heal” itself by embracing a restrictive view of gun rights.

Although this was the court’s first gun rights case in nine years, raising expectations among gun-rights activists that the Supreme Court was poised to expand the reach of the Second Amendment, it is unclear if the justices will actually reach the merits of the case, which is cited as New York State Rifle and Pistol Association v. City of New York.

That is because the hearing was dominated by debate about what lawyers call “mootness,” that is, whether there was still an active controversy remaining for the court to adjudicate after the legal landscape recently changed.

On Jan. 22, the Supreme Court granted three gun owners’ petition for certiorari, agreeing to review a 2nd Circuit Court of Appeals ruling that upheld the city law that prevents holders of a “premises” license—which allows the possession of a handgun at home—from transporting their unloaded, locked-up weapons outside city limits. The gun owners argued the law violated the Second Amendment, the Commerce Clause, and the fundamental right to travel.

The city claimed the transport ban—which Trump administration lawyer Jeffrey Wall told the court is condemned by “text, history, and tradition”—promotes public safety by limiting handguns on city streets. The petitioners wanted to practice shooting at target ranges outside the city or transport their firearms to second homes elsewhere in the state, but the city wouldn’t let them do what they wanted with their property.

New York City asked the Supreme Court to indefinitely suspend the legal challenge because it was in the process of amending its law, but was rebuffed by the court on April 29.

In what critics saw as an effort to dodge review by the court, the city then suddenly modified the premises-license law to allow a license holder to transport a handgun to another residence, whether inside or outside the city, provided that the holder was authorized to possess the handgun at the second residence. The new law also allowed holders to transport handguns to shooting ranges and competitions outside the city. At the same time, state law was amended to allow premises-license holders to transport their handguns, overriding the city’s law.

Justice Samuel Alito told the attorney for New York, Richard Dearing, that the city had taken the “quite extraordinary step of trying to moot the case after we granted review.”

“So what’s left of the case?” Justice Ruth Bader Ginsburg said. “The petitioners have gotten all the relief that they sought.”

You are pushing, she told him, “a case in which the other side has thrown in the towel and completely given you every single thing you demanded … and you’re asking us to opine on a law that’s not on the books anymore.”

Clement said the petitioners hadn’t obtained all the relief they sought, for example, “unrestricted access to gun ranges and second homes.” It was also still unclear, he said, whether his clients could suffer adverse consequences at the hands of city prosecutors.

Clement argued the “voluntary cessation” exception to the mootness rule.

This principle, Joseph C. Davis and Nicholas R. Reaves wrote in the Yale Law Journal, “prevents gamesmanship and preserves judicial resources by requiring defendants who change their conduct mid-litigation to prove that”—in the words the Supreme Court used in Friends of the Earth v. Laidlaw Environmental Services (2000)— “it is ‘absolutely clear’ they will not restart their conduct if the case is dismissed as moot.”

Clement said a regulation the city enacted “specifically to try to moot this case,” made it clear “the kind of transport they were allowing … had to be continuous and uninterrupted.”

“I don’t know what ‘continuous and uninterrupted’ means … if it means that you can make stops for coffee.”

Justice Neil Gorsuch suggested the case was still very much alive “despite herculean, late-breaking efforts to moot” it.

2019-12-02T18:10:03-05:00
Go Back: US News
Previous: Democrats Release Witness List for Upcoming House Judiciary Hearing
Next: President Trump criticises Democrats for pushing ahead with impeachment while he travels to Europe
source : www.theepochtimes.com
''

Texas teen won’t be able to walk at graduation unless he cuts his dreadlocks
China confirms 9 dead from Wuhan coronavirus, 440 infected

What You Need to Know Before 2020 Census Starts in Alaska

More US Troops Under Medical Evaluation After Missile Attack