Chernobyl Radiation Back to Normal After Spike at Forest Fire Site 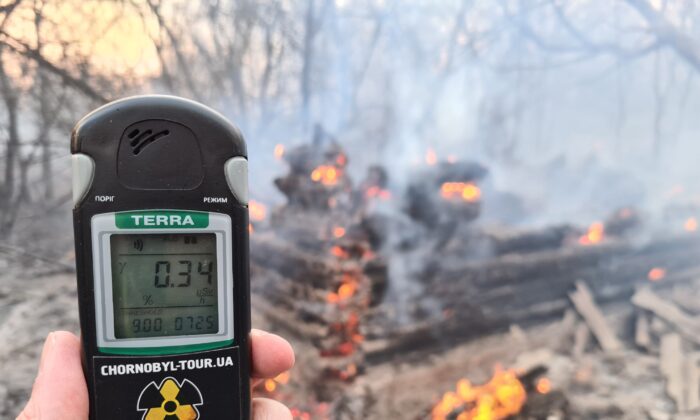 Ukrainian authorities said that radiation levels were back to normal after an earlier radiation spike in the restricted zone around Chernobyl, the scene of the world’s worst nuclear accident.

“There is bad news—in the center of the fire, radiation is above normal,” Yegor Firsov wrote on Facebook on Sunday along with a video of a Geiger counter. “As you can see in the video, the readings of the device are 2.3 when the norm is 0.14.”

“But this is only within the area of the fire outbreak,” he added, indicating a localized radiation spike.

Local authorities on Tuesday sought to allay residents’ fears that the fires near the Chernobyl nuclear power station have led to persistently unsafe levels of radiation, saying that measurements showed they “did not exceed natural background levels.”

“As for the situation in the Chernobyl zone—I want to calm you down,” Firsov wrote in a follow-up post, adding that state radiation security specialists took measurements and detected no unsafe levels of radiation.

“Therefore, you need not be afraid to open windows and air your premises during quarantine,” he added, referring to residents in and around Kyiv, who like all Ukrainians as of Monday, face stricter measures to curb the spread of the CCP (Chinese Communist Party) virus, commonly knows as novel coronavirus.

On Tuesday, the U.S. Embassy in Ukraine said in statement that authorities had intensified quarantine requirements, including prohibiting people from being out in public without masks covering their nose and mouth, and shutting down non-essential services.

The wildfire broke out within the 1,000-square-mile Chernobyl Exclusion Zone set after the 1986 disaster at the plant that sent a cloud of radioactive fallout over much of Europe.

State Emergencies Service of Ukraine reported that 138 firefighters were deployed to fight the blaze, including two Antonov AN-32P planes and an MI-8 helicopter.

The emergency service said Tuesday it was still fighting the fires but the situation was “fully under control.”

Firsov said the blaze was probably caused by people setting fire to nearby grass, which spread to trees.

He called on lawmakers to increase arson fines by a factor of 100, “otherwise, large-scale fires will continue to happen every fall and spring.”

Blazes in the exclusion zone are more dangerous because the trees and plant life are still irradiated from the nuclear meltdown decades ago.

After the explosion in April 1986, people were evacuated and resettled from the 19-mile exclusion zone around the plant, and the zone is still strictly controlled.

The zone is mostly unpopulated, though some 200 people have stayed despite orders to leave.

According to the Emergency Services Ministry, cited by NBC News, there is a greater frequency of fires in the exclusion zone in the spring and the fall.

What We Will ⁠— And Won't ⁠— Remember About The Pandemic

M-Class Solar Flare, First in Ages, Will Set Off Volcano, Including Moana Loa Within 8 to 11 Days

Mayor Jacob Frey and Jack Ruby, False Flags, and What Do They Have In Common?

Why Are Some Countries Doing Better Than Others?

Theory Vs. Reality: Why Our Economic Behavior Isn't Always Rational

The Militarization of Police: When Tyranny Comes Home1 min read