China Accuses Australian Media of ‘Disinformation’ for Reporting the Truth 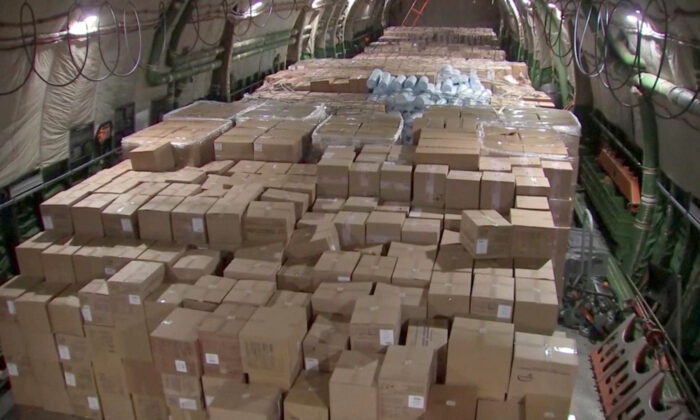 Boxes with medical equipment and masks to help fight the CCP virus (COVID-19) are seen on board a Russian military transport plane on April 1, 2020. (Russian Defence Ministry/Handout via Reuters)
Updated: 2020-04-07 08:50:08

The Chinese embassy in Australia is accusing the Sydney Morning Herald and The Australian newspapers of “spreading disinformation” for reporting that local Chinese companies—tied to the Chinese Communist Party—had stockpiled and shipped essential medical supplies to China in February.

On April 6, the embassy issued a press release titled “Aussie Media’s Disinformation,” in which it doesn’t dispute the reporting, but defends the purchases saying, “the procurement by the Chinese business was just to help China overcome difficulties.” It then chastises the media for characterizing the “purely humanitarian move” as a scandal.

The embassy statement is the latest prong of the Chinese Communist Party (CCP)’s own global propaganda campaign to deflect blame for its now obvious failures to handle the pandemic.

In February when the procurements were taking place, China was dealing with a full-blown epidemic of the CCP virus, commonly known as the coronavirus. Meanwhile, other countries were just starting to see their first clusters of COVID-19, mostly connected to travellers coming from Wuhan, the epicenter of China’s outbreak. Australia’s first case was identified in late January.

We now know that by at least mid-December, the CCP was aware that human-to-human transmission was occurring, making the virus ripe for spreading. Yet, the CCP did not admit this until Jan. 20, after over 5 million people had left Wuhuan.

Another three days passed before Chinese authorities finally implemented the first containment measures for Hubei province—but it was too late. The disease had already spread around the country and overseas.

“The seriousness of the virus was known to the [Chinese communist] regime, which is why they got their operatives in Australia to purchase all the personal protective equipment they could and ship it to China. A particularly reprehensible activity,” Liberal National Party Senator Eric Abetz told The Epoch Times.

“We are paying the heavy price of a communist regime’s failure to live up to its moral and ethical duty in initially informing, and advising, and then in helping other countries deal with the epidemic,” Abetz said.

Gordon Chang, China analyst and author of “The Coming Collapse of China,” said the CCP’s decision not to warn the world meant other countries did not have time to take the necessary precautions they could have.

“So the culpability here is real. You could say it’s reckless, you could say it’s intentional,” he said. “They could have warned the world, they didn’t do it. Matter of fact, they tried to put the world off,” said Chang in a recent episode of American Thought Leaders.

Lying about the outbreak meant the world’s defenses were down, said Australian One Nation Party Senator Malcolm Roberts. “That contributed to the rapid spread around the world. It gave people little time to be ready.”

“People are angry at the secrecy and misinformation” from the CCP, Roberts said.

Moving Needed Supplies Out of Australia

Meanwhile, throughout January and February, Greenland Australia had been mustering the full resources of its Chinese regime-backed company to organise shipments of medical supplies to send to China. This story was reported by Sydney Morning Herald on March 26.

SMH reported that a whistleblower from Greenland Australia had told them that the company had been “instructed to put their normal work on hold and source bulk supplies of essential items to ship back to China.”

These items were sent in February to the Greenland Group’s global head office in Shanghai “as a donation to provide support at the frontline of the virus.”

By March, Australia had its own frontline against the CCP virus and was in need of medical supplies as well.

On March 19, in an interview with 2GB Radio, Home Affairs Minister Peter Dutton said he was “coming after” people caught hoarding supplies like hand sanitizer and selling them. Later in early April, it was announced profiteers will face up to five years in jail for sending essential medical supplies overseas.

On April 1, mining magnate Andrew Forrest’s Mindaroo Foundation announced they had put forward AU$160 million (US$98.3 million) and utilised their close connection with the CCP to purchase 90 tonnes of medical supplies, which arrived in Perth on April 1, with further shipments on April 3 and 4.

Australia, alongside hundreds of countries, is suffering the severe public health and economic impact of the CCP virus pandemic sweeping the planet—a virus that might have been contained in Wuhan, China, had the Chinese communist regime not covered it up.