China Admits One Belt, One Road has Commercial and Military Objectives 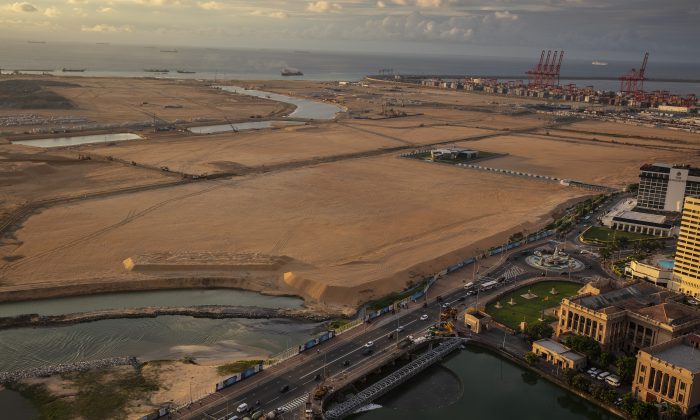 Built on land reclaimed from the Indian Ocean and funded with $1.4 billion in Chinese investment, the Colombo Port City project is seen jutting out into the ocean that will eventually be 65 million cubic meters of sand in Colombo, Sri Lanka on Nov. 20, 2018. (Paula Bronstein/Getty Images)

China’s Defense Minister Wei Fenghe publicly acknowledged for the first time that China’s $1.3 trillion “One Belt, One Road”  commercial initiative is also infused with military objectives. He made the remarks during a visit with a group of South Pacific and Caribbean military chiefs on July 10, according to Xinhua News Agency.

Chinese leader Xi Jinping in 2017 referred to the “One Belt, One Road” (OBOR, also known as Belt and Road) as the “project of the century” that will create the world’s largest web of ports, railways, energy pipelines, highways and streamlined border crossings. Over 126 nations—accounting for two-thirds of the world’s population—have signed on or shown interest.

The scale of that dream is now clear with Gazprom’s disclosing its $55 billion ‘Power Of Siberia Gas Pipeline’ that had completed its 1,864 mile path to China’s northern border. Prime Minister Dmitry Medvedev announced on July 9 that Russia will now invest another $9.5 billion to construct a 1,250 mile section for OBOR’s heavy truck freeway that will stretch 4,000 miles from western China to the Dutch Atlantic Ocean ports.

Chinese Foreign Minister Wang Yi welcomed U.N. Secretary-General Antonio Guterres and International Monetary Fund (IMF) head Christine Lagarde, 37 heads of state and representatives of 150 nations to the second Belt and Road Forum in Beijing on April 25 by stating that OBOR “is becoming a clean road for cooperation, prosperity, openness, green development and a win-win outcome that will benefit all countries.”

The Epoch Times published an article by freelance writer James Gorrie that warned that the Chinese Communist Party (CCP) is pushing OBOR because its only “claim to legitimacy is directly linked to economic prosperity.” The Council on Foreign Relations recently cautioned that OBOR might be a “Trojan Horse for China-led regional development, military expansion, and Beijing-controlled institutions.”

The New York Times reported that OBOR’s “green development” plans include building 700 coal-fired power generators at home and another 300 coal-fired plants in places like Turkey, Vietnam, Indonesia, Bangladesh, Egypt and the Philippines.

Center for Global Development (CGD) reported that OBOR lending terms offered by China to emerging nations have been onerous with Djibouti, Sri Lanka, Kyrgyzstan, Laos, the Maldives, Mongolia, Montenegro, Pakistan, and Tajikistan “at particular risk of debt distress.” When Sri Lanka defaulted on an $8 billion loan for a Chinese company to build a deep-water port, it was forced to sign over the asset in 2017 to satisfy the debt.

CDG quotes an Asian Development Bank analysis of the $26 trillion in loans to fund 2016-2030 planned infrastructure projects—apparently, those projects will financially fail if the borrowing nations are unable to sustain annual compounded growth rates of at least 3 to 7 percent.

Waving off the “challenges and turbulence” over a trade war with the United States and a few OBOR projects in the developing world, Chinese Vice-President Wang Qishan on July 8 told the World Peace Forum meeting at Beijing’s prestigious Tsinghua University that Beijing should remain committed to economic globalism.

But Chinese State Councilor and Defense Minister Wei Fenghe dispensed with niceties on July 10 when he told a contingent of visiting South Pacific and Caribbean military chiefs that through OBOR’s global infrastructure projects, “co-operation will be promoted in such areas as anti-terrorism, peacekeeping and disaster relief to strengthen exchanges and co-operation under the framework of the OBOR,” according to Xinhua News Agency.

Geopolitical Futures commented that the admission was a surprise, because Beijing “has long and loudly” denied that OBOR is meant to enlarge its military footprint abroad:

“For Beijing to feel secure, it needs to be able to prevent outside powers from imposing a blockade around critical chokepoints along its periphery. This means it needs troops far from Chinese shores, and it needs ports, airfields, logistics networks in friendly countries to support them. China was only pretending otherwise to minimize political opposition in BRI partner countries and diminish the sense of urgency in potential adversaries like the U.S. and its allies to counter BRI projects.”

The attitude of most U.S. foreign policy experts has been, if China wants to spend lots of money on OBOR infrastructure with dubious commercial value, “we should let them.”

But Geopolitical Futures emphasizes that with command of the seas as the foundation of American national security, China using OBOR to build disguised military installations and potentially arming them with hypersonic weapons that travel at five times the speed of sound would create the first existential threat to U.S. aircraft carrier fleet dominance.