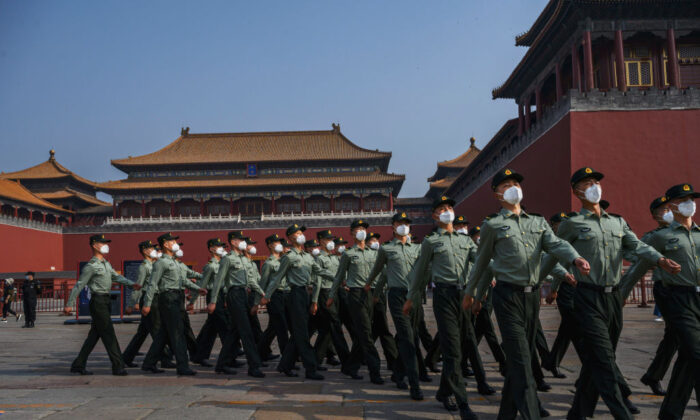 While the world is in the midst of combating an unprecedented pandemic, China is taking the opportunity to fulfill its industrial plans of becoming a tech superpower.

Known as China Standards 2035, the economic blueprint is a continuation of the “Made in China 2025” industrial plan that aims for China to achieve self-efficiency in 10 tech sectors by the year 2025.

Beijing rolled out China Standards in March 2018 during a meeting held at the state-run  Chinese Academy of Engineering. The plan’s objective is for China to dominate new technologies like artificial intelligence, big data, and IoT (internet of things) by developing technological standards and exporting them to the international market.

The document constitutes “the initial roadmap for the China Standards 2035; the set of actions to be taken, and positioning to be acquired, over the next year,” wrote U.S.-based independent consultancy Horizon Advisory in its April report analyzing the document.

Horizon Advisory noted that this document represented China’s next step in its grand strategy.

This is currently evident in China’s sending of medical supplies and health experts to other countries to fight the virus, said Emily de La Bruyère, a co-founder of Horizon Advisory, in an email interview. Beijing seeks to export “Chinese standards of care and public health administration and management,” she said.

Several countries, including Israel, the Netherlands, Spain, and the Czech Republic, have complained that the Chinese medical supplies were substandard or did not work properly.

Tencent explains on its website that the package contains services such as computer programs for holding online meetings and databases on medical knowledge about the virus.

U.S. officials have previously warned about the risks associated with Tencent, outlining that its ties to China’s state security apparatus makes the company a “surveillance arm of the Chinese Communist Party (CCP).”

As companies around the world race to develop a vaccine for the CCP virus, commonly known as the novel coronavirus, Beijing is also eager to utilize large numbers of clinical trial participants, “to leverage that position to extend its standards in R&D, production, distribution, and care as the sprint to find a cure moves ahead,” said Nathan Picarsic, another co-founder of Horizon Advisory in an email interview.

He added that China has especially prioritized developing pharmaceutical production and standards in both Made in China 2025 and China Standards 2035.

Both plans rely upon Beijing’s state-directed initiative of leveraging cooperation between the military and private industry to advance technological innovation. The effort is coined “military-civil fusion,” and is now overseen by a government agency called the Central Commission for the Development of Military–Civil Fusion.

New U.S. export restrictions against China were enacted in late April to stem the flow of U.S. technology to the Chinese military under Beijing’s “fusion” strategy.

The Department of Commerce now requires U.S. companies to obtain licenses in order to sell certain items to companies in China that support the Chinese military, even if the items are for civilian use. The list of items include semiconductor production equipment and sensors.

Bruyère said that while export restrictions will not curtail the CCP’s ambitions, “those measures are necessary first steps better to understand the threat and compete over standards.”

“Beijing’s strategy hinges on access to US technology and innovation. Beijing fears a ‘high-tech blockade,’” she added.

Since May last year, the U.S. government also placed a roster of Chinese companies on the Entity List, meaning that American companies need to obtain special licenses in order to do business with them.

Those companies include Huawei and its 114 non-U.S. affiliates; five Chinese supercomputer firms and their many aliases; China’s largest state-owned nuclear company CGNPG and its three affiliates; Chinese artificial intelligence firms such as SenseTime Group and Megvii Technology, and surveillance equipment manufacturers such as Hikvision.

In November 2019, the Commerce Department announced a procedure to secure U.S. telecommunications networks and their supply chains, adopting a “case-by-case, fact-specific approach” to review and bar any transactions that pose security risks. According to Reuters, the procedure was widely seen as targeting Chinese telecom firms such as Huawei and ZTE.

Then, in January, the Commerce Department announced export restrictions on U.S. tech companies making artificial intelligence software for analyzing satellite images, which experts also saw as a move to block the technology from entering China.

Picarsic said that China’s approach is fundamentally different from other countries in the pursuit of technology innovation.

Instead of investing “in basic research and fundamental science and technology,” the CCP capitalizes on loopholes in regulations and acquiring stakes in foreign companies as ways to dominate global supply chains.

The Horizon Advisory report pointed out that China has already made inroads in advancing international standards through its state-controlled National Transportation Logistics Platform, LOGINK.

LOGINK is a logistics information-sharing network constructed and implemented by a number of Chinese government ministries, including transport, science and technology, commerce, and public security, according to its website. It works with Chinese companies such as state-owned shipping giant COSCO and logistics operator Cainiao, which is run by tech giant Alibaba.

China wants countries to adopt LOGINK’s data and logistics software, so that it can gain access to large amounts of data used in transporting goods.

Beijing “seeks to revolutionize the CCP’s global information access and control, to propel Chinese companies’ and information systems’ positioning, and to cement international standards—itself as the standard for modern transportation’s information foundation,” Horizon Advisory stated in its report.

LOGINK is a member of the trade group, International Port Community Systems Association.

The next-generation of wireless communication technology, 5G, is another focus for the Chinese regime.

Huawei is currently the biggest contributor to 5G standards, according to a March report by U.S.-based research and consulting firm Strategy Analytics.

The Chinese company is especially ahead of the game in terms of supplying all-Huawei software and hardware equipment (known as end-to-end) for 5G network infrastructure, whereas other telecom firms lead in particular tech specifications.

“The standards competition is the strategic showdown of the century,” Bruyère explained. “Beijing has been planning for it, explicitly, since at least 2000,” she added.

She added that the U.S. government needs to understand its standards competition with China, such as the long-term impact of China owning networks and platforms, and how such competition could threaten America’s economic, security, and political systems.

It was not enough for the U.S. government to focus on individual Chinese companies such as Huawei, Bruyère said, since “Beijing’s state backing can simply replace them with a new army.”

Picarsic noted that “Beijing intends for this competition to be a long-term, peacetime affair.”

He elaborated that Beijing has an advantage, given its market size and “careful protection of its own critical infrastructure and data.”

The United States can only rival China if it works together with allies, Picarsic concluded.