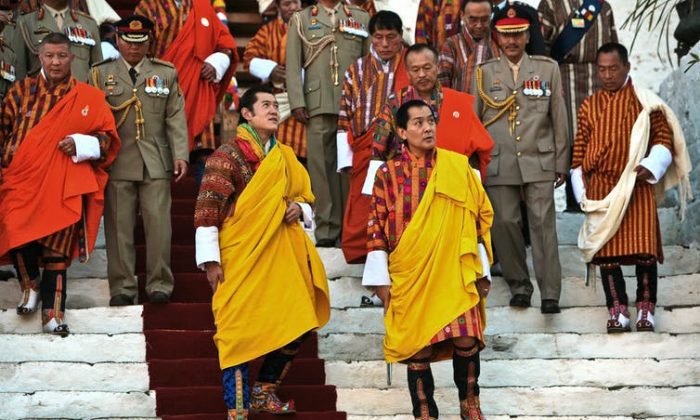 China recently opened a new front in its ongoing border disputes with Bhutan, which India countered.

In June for the first time ever, China claimed the 404 square miles of the Sakteng Wildlife Sanctuary that’s famous for its red pandas and is home to the Brokpas, the semi-nomadic highlanders of Bhutan. The sanctuary sits in Bhutan’s southeastern corner. It does not have a common border with China, but is adjacent to the Indian province Arunachal Pradesh, which China also claims.

Bhutan learned of China’s new demand at a meeting discussing a grant application.

“Early [in June], Bhutan sought a grant for the sanctuary from a global environmental organization that funds sustainable development projects. Unexpectedly, China’s representatives to that organization opposed the grant. Their reason: China considers the sanctuary to be ‘disputed territory,’” said Felix K. Chang, a senior fellow at the Foreign Policy Research Institute in an analysis published on July 29.

Bhutan counteracted China’s claim in writing and eventually got the funding, but Chang said the move came as a big surprise for Bhutan.

China and Bhutan share over 311 miles of the all-Himalayan border and a history of territorial disputes. Bhutan recognizes four areas that are disputed, while China says there are six areas that are disputed (not counting Sakteng), according to Sovereign Limits, a data resource on land and maritime international boundaries.

Experts are surprised at the recent move because China has never claimed any territory in Bhutan’s eastern border and in over 35 years of its diplomatic talks with Bhutan it has never mentioned Sakteng.

“Beijing might think that by claiming territory in eastern Bhutan it could drive a wedge between Bhutan and India or, at least, between those Bhutanese who want to maintain close ties with India and those who prefer a more independent foreign policy. Either way, such a strategy could be seen as putting indirect pressure on India, which recently has been a thorn in China’s side,” said Chang.

India and China have had an intense standoff at their disputed border since May that escalated on June 15 at Galwan in the Indian territory of Ladakh into a brawl that killed 20 Indian soldiers and an undisclosed number of Chinese soldiers. The incident has had a severe impact on India and China’s relationship and is leading to changes to India’s foreign and economic policies towards China.

Dr. Rajeswari Pillai Rajagopalan, Distinguished Fellow at the Observer Research Foundation told The Epoch Times in an email that it’s very likely that China wants to punish Bhutan for allying with India but by claiming Sakteng, China is also trying to gain strategically as the sanctuary lies in the border with Arunachal Pradesh.

China started claiming the 90,000 square kilometers of this state in eastern India a week before the Chinese regime’s leader, Hu Jintao, visited India, 14 years ago. Thisclaim is based on Tibet previously ruling Tawang, with the rationale that China’s claim to Tibet entitles it to all of Tibet’s former territory. China calls Arunachal Pradesh Southern Tibet.

Tawang is about 2 percent of Arunachal Pradesh. It has an ancient monastery and is an important seat for Tibetan Buddhism. In 1950 Tibet ceded Tawang to India to save it from being occupied by the Chinese Communist Party.

“The proximity of Sakteng to the Indian state of Arunachal Pradesh makes it particularly attractive for China,” said Rajagopalan.

She said China actually doesn’t want to resolve its border disputes with India and instead wants to leverage them for a power play.

“As far as India is concerned, an unsettled border is always in China’s interest because it will keep India off balance. New Delhi will be off the Chinese hook if the border and territorial disputes are resolved. In fact, as China becomes more powerful, it has less interest in finding a solution to the border and territorial disputes,” said Rajagopalan.

After the Chinese claimed the Sakteng Wildlife sanctuary, the Indians offered to build a road through it that will cut down the distance to the disputed border by 93 miles and make the movement of Indian troops faster.

This road is proposed from the Indian city of Guwahati to Tawang in Arunachal Pradesh, according to the Indian daily, Economic Times. The Sakteng Wildlife Sanctuary is sandwiched between Assam whose capital is Guwahati and the historical city of Tawang that’s on the border.

This proposal is not new and India is yet to make a formal communication of this with Bhutan, according to the Indian political weekly, India Today.

The elected leader of Arunachal Pradesh, Pema Khandu reiterated an old request to the Indian government in mid-July to take up the matter with the Bhutanese administration.

“This road is very important for both countries. It will be a win-win situation not just strategically but also in terms of tourism and economically,” said Khandu.

It is very unlikely that the Indian government will have formal communication on this matter with Bhutan because it’s still engaged in disengagement and de-escalation talks with the Chinese after the Galwan incident, according to India Today.

Aparna Pande, the Director of the Initiative on the Future of India and South Asia at the Hudson Institute in Washington, D.C. told The Epoch Times over a chat platform that though there’s no formal communication on the matter, the Indian and the Bhutanese administrations are in touch over it.

“The fuzziness will remain. India always tries to make sure that Bhutan is given due respect and so anything India says about Bhutanese territory is always behind closed doors and not in open,” said Pande.

“They will not make that public unless and until both want that made public.”

The Indian media reports that the Chinese have suggested a “package solution” to the Bhutanese offering them territories in exchange for what the Chinese want on the western border.

“The boundary between China and Bhutan is yet to be demarcated, and the middle, eastern and western sections of the border are disputed. China has proposed a package solution to these disputes,” said the Chinese Ministry of Foreign Affairs spokesperson Wang Wenbin when asked about Sakteng on July 21, reported the Indian newspaper, The Hindu.

The swap deal is said to be similar to what China had offered to Bhutan in 1996, which the Himalayan nation declined.

Phunchok Stobdan, a former Indian diplomat told The Epoch Times over the phone from New Delhi that China has earlier offered similar exchange solutions to Tajikstan and Kazakhstan and the “package solution” is basically aimed at trapping India.

“To bring India to object to it and then accuse India of interfering in Bhutanese affairs. It’s just to trap India in a conflict. This could be one of the ploys … otherwise, I don’t find any logic in raising this particular issue at this moment,” said Stobdan.

“Obviously there are other strategic factors of the India-China conflict in the Ladakh sector, it’s certainly directly linked with this issue in eastern Bhutan,” he added.