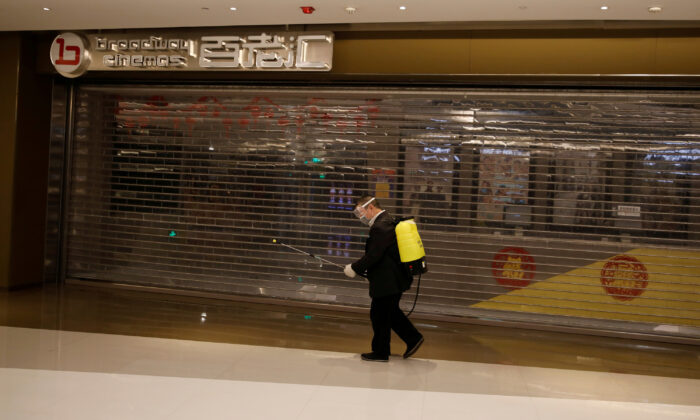 A staff member carrying sanitizing equipment walks past a closed cinema at a shopping mall, as the country is hit by the outbreak of the new coronavirus, in Beijing, China on Feb. 3, 2020. (Carlos Garcia Rawlins/Reuters)
Updated: 2020-02-07 08:30:17

BEIJING/SHANGHAI—Even before the new coronavirus, people working in Chinese entertainment had been calling the industry’s struggles their “bleak winter”—as tighter censorship, a crackdown on tax evasion and new government restrictions strangle opportunities for work.

The epidemic is only exacerbating that misery.

Cinemas across China have closed as part of efforts to curb the outbreak and the premieres of seven expected blockbusters scheduled for the Lunar New Year holidays—a time when box offices usually rake it in—were postponed or canceled.

Since Jan. 24, the day when the government warned against large gatherings in public and the day before the holidays, box office takings for the world’s most populous nation have been virtually negligible. Industry bodies have also asked actors not to return to work until further notice.

“I think China’s annual box office revenue will likely halve from last year due to the coronavirus outbreak. Nobody is going to a cinema until the danger has passed,” Qiu Hongtao, vice president of Taihe Entertainment, a movie production and investment firm, told Reuters.

“We expect quite a lot of cinemas will go bankrupt. Actors and actresses may have to cope with a lack of work, but for cinemas, the rent and management cost burden will crush them.”

The coronavirus outbreak  is forcing some production houses to make unconventional and controversial choices.

Huanxi Media Group released “Lost in Russia,” a comedy that was widely expected to go on to blockbuster success, on Bytedance’s online platforms free for consumers in return for 630 million yuan ($90 million) to fund new films—a move that has infuriated China’s cinema industry.

The makers of the martial arts comedy “Enter the Fat Dragon” made a similar move, with video streaming service iQiyi Inc announcing a fee-based online release.

The virus-induced gloom comes at a time when the world’s second-biggest movie market has been in dire need of a shot in the arm.

Domestic movie-making—essential to sustaining the market as the government generally caps the number of major foreign releases allowed in any one year at 34—has also been in a precipitous decline as censorship grows.

Content offensive to “core socialist values” has been banned since 2017—part of efforts, under Chinese leader Xi Jinping, to tighten controls on society which have also included clampdowns on activists, internet regulation and the rise of government surveillance.

Last year, censors were especially sensitive as the country celebrated the 70th anniversary of the Communist Party’s takeover of China, industry sources say. At least 15 movies were either pulled, rescheduled or amended, according to media reports.

The biggest to fall victim was the World War II epic “The Eight Hundred” by director Guan Hu with a reported budget of $80 million. Its June release was suddenly canceled at the eleventh hour after retired Communist Party officials complained it glorified the heroism of the rival Kuomintang party.

Creative freedom has shrunk so much that the China Independent Film Festival, one of the country’s longest-running and largest, said last month it had suspended operations indefinitely.

“It is impossible to organize a film festival that truly has a purely independent spirit,” the organizers said.

Nor is censorship expected to let up anytime soon as the Communist Party will be celebrating the hundredth anniversary of its founding in 2021.

New rules on salaries and intense government scrutiny of tax strategies used by some of China’s most well-known faces have also been wreaking havoc within the industry. The crackdown saw A-list movie star Fan Bingbing slapped with a $129 million fine.

Between the scramble to get their taxes in order and censorship, nearly 1,900 movie production companies folded in 2019, domestic media have estimated.

For actors, it has meant a severe dearth of jobs in an already fiercely competitive industry.

Chinese actor Li Bin, 37, said the “bleak winter” has changed the way he and other actors approach work.

“Now if someone gives me a screenplay, the minute I get my hands on the script, the first thing I do is to pick on the stuff that cannot be shot.”

“I don’t pay much attention to the story. I care more about whether the screenplay is going to get past the censors and whether investors will get their money back,” he said.

By Pei Li and Brenda Goh