China in Africa: Embedded and Growing 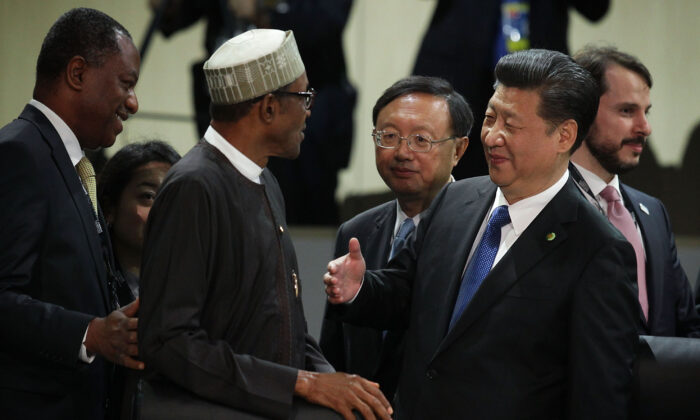 The spread and depth of China’s engagement in commerce, education, media, the military, security, and telecommunications in the 54 countries of Africa go far beyond the scope of the mining interests for which foreign powers have targeted Africa for centuries.

Today, “China has positioned itself to become a strategic partner to Africa,” said Paul Nantulya of the African Center for Strategic Studies to the commissioners of the U.S.-China Economic and Security Review Commission (USCC) in a hearing held May 8.

For Africans, partnering with China comes with few conditions.

“China doesn’t have political strings attached in terms of criteria that African countries must meet,” said Yun Sun, Director of the China Program at the Stimson Center, a Washington think tank.

Indeed, China’s inroads into Africa have been ideological as well as economic, Nantulya said.

“China is enlisting Africa’s support for the ‘Community of Common Destiny,’ China’s alternative to the Western-led governments’ model.  Africa was the first region to commit itself to this community, an endeavor written in China’s constitution.”

Nantulya illustrated his point with a review of recent events.

“In the past six months,” Nantulya said, “China has delivered tanks to Nigeria, helped Ethiopia and Sudan launch satellites, [and] conducted military exercises with the South African and Tanzanian military.”

In Zimbabwe, Chinese representatives “attended a pass-out ceremony of junior officers trained by the PLA at Zimbabwe’s top college.”  The PLA is the People’s Liberation Army of China.

African “liberation movements…were trained by the PLA from inception,” he said, and those ties “remain pivotal to China’s strategic influence.”

Nantulya is referring to the independence movements in Africa which sought, in conjunction with their military wings, to overthrow colonialism throughout the continent during the post-WWII era.

Nantulya said that many of those movements turned to the PLA “for basic army building once in power.”

As a result, “many share fundamental traditions, ideology, and doctrine with the PLA.”

While Africans favor an education in the United States for “strategic and senior levels” of their armed forces, considering it a “key for career advancement,” Africans think well of China as the source of training of NCO’s and junior officers, and technical subjects, Nantulya said.

These schools foster the idea that “the uniform serves the party before the state, a notion directly opposed to the Western principle of an apolitical military,” he continued.

Already, over 2,000 party and military cadres from Africa train in Chinese political schools each year.

Yun Sun, a graduate of the Chinese Foreign Ministry’s Foreign Affairs College in Beijing, testified that “the level of attention which China attaches to Africa is simply massive compared to the U.S.”

And its model is supported by the fact that the Chinese “are there.”

The impact of the Chinese resident population throughout Africa is bolstered by numerous visits of Chinese government and military officials each year, Sun said.

China protects its interests, assets, and people in the nations of its closest diplomatic partners “through the use of China’s other armed forces, such as the People’s Armed Police,” Nantulya testified.

The People’s Armed Police, or “wujing” in Chinese, are a para-military security force that are responsible throughout China for internal security, anti-terrorism, riot control, and other major threats to China’s stability.  The force reports to the highest level of China’s military, the Central Military Commission, and, since the 2018 military reform in China, to the Central Committee of the Chinese Communist Party.

Ethiopia, Kenya, Nigeria, Namibia, Mozambique, and South Africa are in the tier of countries to which China would, and does, send its paramilitary force, Nantulya added.  Uganda, among their ranks, chooses to use its own security forces to protect Chinese assets on its soil, he added.  In lower tiers of diplomatic relationships, “private security companies are more prominent,” he concluded.

Yun Sun, asked how the United States could counterbalance the Chinese influence in Africa, said that “a lot of African elites find the Chinese approach to be quite appealing.”

“So, the strength of the U.S side has to lie with society,” she continued, indicating that America has to win the hearts and minds of the African people in order to gain influence on the continent.

Sun continued, “We have to understand what is happening between Chinese elites and African elites, [who] find the Chinese approach to be convenient and expedient.”

Asked how much of a role corruption plays in the relationship, Ambassador David Shinn, a career foreign service officer with decades of experience in Africa, said China is “pushing on an open door.”

China’s overwhelming interest in Africa is, of course, its desire to control the rich and abundant natural resources of the continent, witnesses at the hearing agreed.  In that quest, China follows the European exploitation of the continent, which began in the 15th century.

The United Nations Environment Programme (UNEP) states that Africa “holds a huge proportion of the world’s natural resources, both renewables and non-renewables.”

Critically, the U.N. figures show that those natural resources comprise 30 to 50 percent of the total wealth of most African countries.

Yun Sun said that second to China’s desire to acquire the natural resources of Africa, the country has also “been looking for places to shift supply chains.”  Along with southeast Asia, China considers Africa as a destination for that relocation, which hasn’t yet occurred.

“The Chinese first need to have infrastructure” to support the move of industrial capacity, as well as access to and movement of natural resources.  In her discussions with Chinese officials, Sun said she has been told “that’s why they are investing in it.”

A by-product of Chinese investment, military presence, ongoing infrastructure projects, mining, and other activity on the continent has been the influx of an estimated one million Chinese to Africa.  This has led to security risks for Chinese citizens, in countries where crime, kidnapping, civil conflict, and epidemics are common.

China Global Television (CGT) and China Radio International both broadcast from Nairobi, Kenya.  Viewers and listeners can access their content 19 hours each day in Chinese, English, and Swahili, Nantulya added.

The second largest digital television provider on the continent is China’s Star Times, he said.  It distributes Chinese content to 10 million subscribers in 30 countries, according to Nantulya.

“Huawei has built roughly 70 percent of the continent’s 4G network,” she added.

Transsion, a Chinese mobile phone manufacturer, dominates the African smartphone space, Hruby continued.  China, she said, has nearly-universal penetration in the media markets of Africa, with 250 million people—nearly a third of the market—owning a smartphone.

“While I do believe there are some challenges to the Chinese commercial footprint in African markets and how fast it’s evolved, I don’t know that I see a world of total domination,” Hruby said. “Instead, I see that African countries have greater choice than they’ve ever had in terms of partners, and their needs are enormous.”

Hruby said that the United States needs to “really double-down in our areas of competitiveness. We need to continue to be a world leader in media and entertainment. Hollywood, Nollywood (the Nigerian film industry)—those kinds of partnerships shape the world view, the frame of mind, of millions and millions of African young people. These kinds of things are our assets and we’ve been lazy about…finding ways to collaborate.”

“America needs to figure out “how to mobilize financing of the creative industries. Why isn’t there a Hollywood Nollywood task force that’s for looking for partnerships between the film industries in African markets and Hollywood?”

Hruby said that America has opportunities in Africa, and realizing them can counter Chinese influence, she suggested.

America should do “things that align with the aspirations of Africa’s youth which are going to be a billion young people–one in four workers globally—which is something that we’ve always done well,” Hruby said.