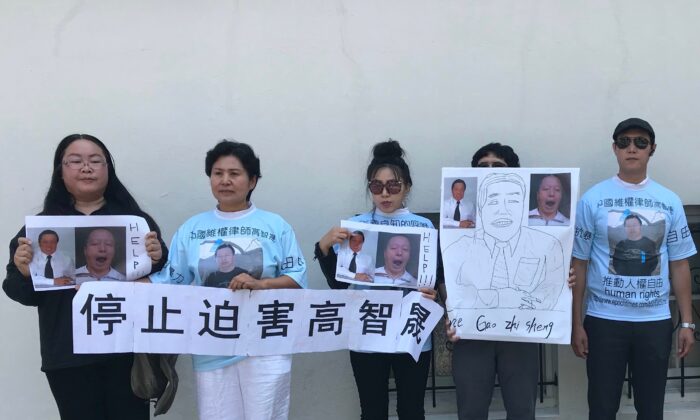 China’s Global Lawyers Forum (GLF) officially opened in Guangzhou on Dec. 9, one day ahead of the 70th anniversary of the Universal Declaration of Human Rights. The wife of a renowned Chinese human rights lawyer sent an open letter to the forum, asking the attending lawyers to help look for her missing husband.

“I am the wife of China’s human rights lawyer Gao Zhisheng, who has been missing for 844 days,” Geng He stated at the beginning of her open letter, which was written in Chinese.

She told the lawyers attending the forum that she and her entire family have not been able to reach her husband since he went missing.

She also stated in her letter that she and her family have been constantly asking and checking with all levels of Chinese authorities but have received no response.

Before Gao went missing, he had been repeatedly arrested and jailed for defending members of persecuted minority groups such as Falun Gong practitioners and Christian family churches. Gao also defended some outspoken political dissidents in China. He was last seen on Aug. 12, 2017.

Geng, who escaped China with her two children in January 2009, has been living in the United States since March 2009.

In her letter, Geng commented that for China to host a global lawyers forum is just as absurd as the regime hosting the World Internet Conference, which has been an annual event in China since 2014. She stated that even the lawyers’ basic rights are not protected in China, let alone the rights of other Chinese people.

“How come a country that can easily and conveniently make lawyers disappear is able to shamelessly host a Global Lawyers Forum?” Geng asked in her letter.

The main subject of the two-day GLF was the international legal services for China’s Belt and Road Initiative (BRI). The BRI is a global development strategy adopted by the Chinese regime in 2013 for infrastructure development in 137 countries in Asia, Europe, Africa, the Middle East, and the Americas.

According to a report from Business Insider, China’s total investment in the BRI is estimated to be between $1 trillion and $8 trillion.

More than 800 lawyers from 57 countries attended the forum, according to reports from China’s Justice Department’s official website.

Gao’s battle to improve China’s human rights situation has been widely recognized by international society. He has been nominated three times for the Nobel Peace Prize.

In 2018, Gao was awarded the Shahbaz Bhatti Freedom Award by the First Step Forum, a Finland-based international NGO that monitors religious and human rights abuse worldwide.

“Gao is China’s Mahatma Gandhi and Nelson Mandela,” said David Kilgour, a board member of the First Step Forum, who presented the award to Geng in 2018.

Geng is not the only one who criticized China’s human rights abuse during the GLF. During the forum, the German media Deutsche Welle (DW) interviewed Xu Yan, who is also the wife of a renowned human rights lawyer in China.

Xu’s husband, Yu Wensheng, was arrested in January 2018 for defending practitioners of the spiritual discipline Falun Gong, which is persecuted by the Chinese regime. Xu told DW that in the almost two years since the arrest, her husband has not yet been allowed to meet a lawyer.

According to DW, Xu said that she was not allowed to leave home while the GLF was in session.  She provided DW with a video showing that more than 10 plainclothes police officers tried to prevent her from leaving her home.

Xinhua News, an official mouthpiece of the Chinese regime, reported on an interview with Zhou Yuansheng, one of the officials from China’s Ministry of Justice. Zhou said that the reason China held the GLF was to support and encourage China’s lawyers to become more confident and mature.

Zhou also said that China wanted to advance the professional skills of the Chinese lawyers, increase the quality of their legal service, and advance them to the center of the international legal service stage.

Geng told The Epoch Times that she and her two children are very concerned about Gao’s safety and health. She urged Western governments and human rights organizations to step forward and pressure the Chinese regime to release the location where Gao is detained.