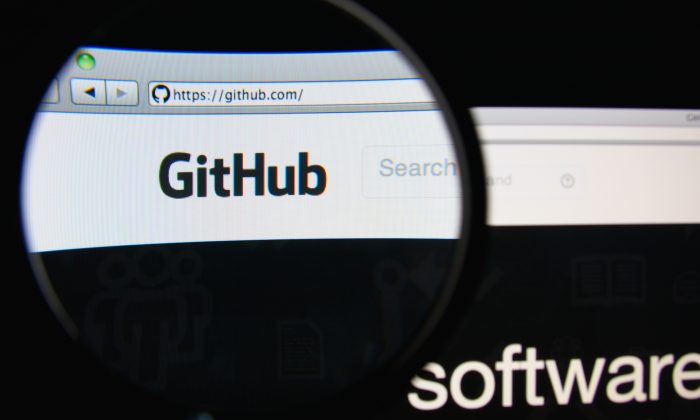 The GitHub homepage through a magnifying glass, in Lisbon, Portugal, on Feb. 19, 2014. GitHub is a web-based hosting service for software developers. (Shutterstock.com/Gil C)

The Chinese regime has asked the world’s leading software development platform to remove content relating to a spiritual practice that is persecuted in China, in its latest attempt to pressure Western companies to enforce its censorship standards.

GitHub, which is owned by Microsoft, published a letter on Sept. 5 from China’s Ministry of Public Security (MPS), the agency that oversees police and security forces within the country, asking it to take down information relating to the spiritual discipline Falun Gong because it allegedly breached China’s “laws and regulations.”

Falun Gong, or Falun Dafa, is a spiritual practice that gained popularity in China in the 1990s. The Chinese Communist Party (CCP), under the direction of then-leader Jiang Zemin, banned the practice in 1999, subjecting its adherents to a sweeping persecution involving imprisonment, slave labor, torture, and even organ harvesting.

Access to information about the practice is tightly controlled under the regime’s vast internet censorship apparatus, known as the Great Firewall.

GitHub, unlike other Western companies, has managed to stay online in China, serving as a rare platform for sharing dissenting voices in the mainland.

The MPS letter, dated Sept. 4, asked GitHub to remove information contained in four repositories, a digital storage space for projects on the platform, and to ban the publishers’ accounts. Failing this, the MPS requested GitHub to at least not allow visitors using a Chinese IP address to access the repositories.

The four repositories are still accessible within the United States, but three of the links are now inaccessible in mainland China, according to feedback from mainland Chinese users obtained by the Chinese-language edition of The Epoch Times.

GitHub did not respond to a request for comment.

The repositories targeted by the MPS contained uncensored information critical of the Chinese regime. One of the repositories contained a mirror of the website of the Chinese-language edition of The Epoch Times. The U.S.-based publication, known for its reporting on issues deemed sensitive by the CCP such as human rights, is censored in mainland China.

The Tuidang movement began soon after The Epoch Times published the editorial series “Nine Commentaries on the Communist Party” in November 2004. Millions of Chinese have renounced their ties via statements published on a website affiliated with the Chinese version of this newspaper.

Huang Wanqing, deputy editor-in-chief of the Chinese-language edition of The Epoch Times, criticized the MPS’s attempt to censor the publication in the mainland.

He said that there have been consistent attempts to disrupt the paper’s operations overseas, and its reporting, when there are major events that cast the regime in a negative light, such as the ongoing Hong Kong protests.

For instance, multiple newspaper boxes were recently sabotaged in Europe and North America, while the Hong Kong edition was pulled off the shelves of local 7-11 convenience stores, an act critics say was a result of pressure from Beijing.

“These are all evidence of the CCP suppressing The Epoch Times and stifling independent and truthful reporting,” Huang said.

This has not been the first time GitHub received requests from the Chinese regime. In 2016, the Cyber Security Association of China (CSAC), a Party-controlled industry association, wrote to the company demanding the immediate removal of a post speculating that Chinese leader Xi Jinping may have ordered the murder of his half-brother, which the CSAC said was “groundless and malicious slander.”

GitHub has been a victim of multiple cyber attacks linking back to China since its establishment in 2008. In January 2013, Chinese censors briefly blocked GitHub through keyword filtering.

In March 2015, GitHub experienced the largest DDoS (denial of service) attack in its history, which shut down the website for five days. The attack was later traced back to servers belonging to Chinese state telecom operator China Unicom. GitHub said the attack was intended to force the platform into removing a “specific class of content.”

Great Fire, a nonprofit dedicated to countering censorship in mainland China, conducted an analysis and concluded that China’s internet censorship authority, the Cyberspace Administration of China was likely behind the attack.