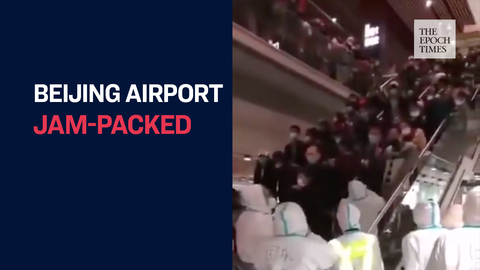 As the CCP virus, commonly known as the novel coronavirus, is ravaging countries around the world, the Chinese regime has launched a propaganda and disinformation campaign to maintain social stability and to bolster its international image. Meanwhile, there is evidence of power struggle between political factions within the regime and has been displayed through the media.

The Epoch Times refers to the novel coronavirus as the CCP virus because the Chinese Communist Party’s coverup and mismanagement allowed the virus to spread throughout China and create a global pandemic. The virus started in the city of Wuhan last year before spreading around the world.

In order to hold on to its power, the Chinese Communist Party (CCP) needs to maintain social stability by resorting to both iron fist and concocting lies to silence its people.

Whistleblowers of the epidemic were reprimanded, citizen journalists have been arrested, and even citizens who protest against the high cost of food are being arrested.

Chinese authorities covered up the initial outbreak in Wuhan, and the earliest sign of the mystery pneumonia may have flared up in mid-November.

Then in December, authorities reprimanded eight medical doctors for spreading “rumors” after they tried to alert the public of the “SARS-like” outbreak. Instead of heeding the warnings, the authorities allowed 5 million people to leave the city ahead of the Chinese New Year.

The authorities did not inform the public that the virus was contagious until Jan. 20, and they locked down Wuhan four days later.

In order to further cover up the true situation in the country, the CCP fabricated data to downplay the scale of the outbreak while denying international experts access into China.

Authorities have enforced strict lockdowns in many cities, villages and communities. Although crematoriums in Wuhan are running at full capacity, hospitals and the media have been completely silenced, and the real data has been destroyed.

All social media postings on the outbreak are censored. As a result, any postings that are unfavorable to the regime are deleted, and those who post them either receive a harsh warning or are taken away by police.

The CCP attempts to portray a positive image to the rest of the world while targeting countries with their disinformation campaign.

In late February, the CCP ordered secret agents stationed in different countries and internet trolls to disseminate a document to various websites and social media platforms around the world—the goal was to create confusion and fear about the CCP virus among the local Chinese population.

Chinese internet trolls, known as the “50-cent army,” work to regulate internet speech by deleting information deemed “sensitive or harmful” by the regime, as well as by posting pro-Beijing propaganda and directing online discussion away from topics that are critical of the regime.

The document is a standard template which depicts a dire situation of the outbreak in a country, aimed at misinforming the recipient. It also makes the CCP appear competent in handling the outbreak. The content is the same for every country, only the name of the country is changed on the letter.

Below is an English translation of the document which was originally in Chinese:

“The outbreak of the contagion is getting out of control in [country]. I learned from a friend of mine who works in a hospital in [country] that countless patients go to seek treatment every day. However, the hospital does not have enough diagnosis kits. These patients were told to go back home and wait. In this country, the percentage of the senior population is quite high. As a result, numerous patients have to wait to die at home. Those who have died before being diagnosed will not be counted as a confirmed patient. That explains why the figures reported in [country] are so low. This is horrible. I have already booked a plane ticket for China. During the most crucial period of time, only a government (Chinese regime) who has authoritarian power can effectively handle such a big crisis.”

Image 1: vilify/demonize Japan message sent at 8:26 on a certain day.

Image 2: vilify/demonize France; message sent at 8:45 on the same day.

Image 3: vilify/demonize Switzerland, message sent at 8:46 on the same day.

Image 4: vilify/demonize the United States, message sent at 8:51 on the same day.

Some Chinese netizens posted evidence online to expose that high-level officials ordered internet trolls to send out the document.

In the screenshot showing a conversation, the aforementioned document was sent to a recipient (internet troll). The recipient then asked, “Which country (should we fill in?)” The sender replied, “The United Kingdom, Japan, South Korea, United States, France, Germany, Italy, Canada, etc., you may choose any of these.”

Image 6 shows another version of the manuscript which was disseminated in various countries between Feb. 24 and Feb. 27.

Although the rumors and confusion in other countries were spread by CCP spies and internet trolls, an article from a state-run media outlet blames it all on “overseas anti-China forces,” saying that these forces aim at creating chaos and have already achieved their goal of driving a large number of overseas Chinese to return to China.

Large numbers of overseas Chinese have rushed back to China in mid-March amid the CCP’s claims that China is a much safer place than other countries.

Propaganda slogans on the internet have praised the CCP as a “Noah’s Ark” that provides a safe haven during a crisis: “Although being the motherland of all Chinese people, China is not very rich, but at the critical moment it will do its best for its children!”

Many overseas Chinese were deceived by the propaganda and have returned home at their own peril.

Upon returning, they are required to self-quarantine for a few days. But they need to cover the costs of high quarantine fees and treatment.

Furthermore, numerous social media posts began attacking those who returned to China from overseas, blaming them for importing the virus.

“You were not here when we were building our country; but you are here first to become a problem and a burden for your home country,” one post read.

“What you are doing is to come back from thousands of miles away just to poison your home country,” another post read.

In one post, the CCP takes the opportunity to act as the “good guy.” State-run Beijing News wrote, “Don’t randomly affix the label of ‘making trouble for the country’ on the Chinese students who returned from abroad.”

China’s media outlets and internet trolls are both controlled by the regime. There is evidence of conflict between different political factions that has played out through the media.

“Stop demonizing foreign countries’ fight against the epidemic. What these people [internet trolls] are doing is to distort people’s moral values.”

The article received a lot of praise from readers and netizens, and called it “a work of conscience.”

On March 15, China Youth Daily published a second, revised version on the same topic, titled “Stop Demonizing Foreign Countries’ Fight Against the Pandemic.” The article lashed out at internet trolls for making up rumors.