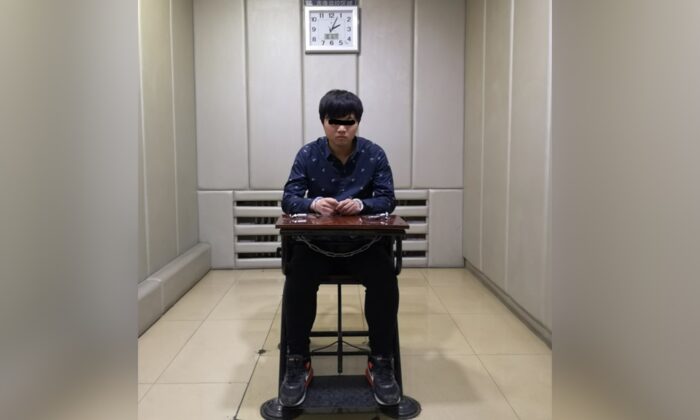 A 25-year-old Chinese netizen was arrested on Oct. 7 for his comments backing the Houston Rockets basketball team, following the team manager posting a tweet in support of Hong Kong protesters.

“I live and die with the team, come arrest me,” Wang Haoda, a self-identified Houston Rockets fan and musician, wrote on the popular Chinese social media platform Weibo around Oct. 6 midnight.

The post was accompanied by a photo of himself wearing a red Rockets jersey while holding a lighter toward a Chinese national flag. Sporting a black eye patch on his right eye, a face mask, and a black t-shirt underneath the jersey, Wang is dressed similarly to Hong Kong protesters who have staged mass demonstrations for over four months against Beijing’s encroachment.

The eye patch has become a protester symbol of the police’s excessive use of force, after a female volunteer medic was hit in her right eye, likely by a police projectile, during demonstrations in August.

Wang was arrested less than three hours after he published the post.

Wang’s arrest marks the latest fallout from the Houston Rockets’ general manager Daryl Morey pro-Hong Kong tweet on Oct. 4, containing the message “stand with Hong Kong,” a popular slogan in the Hong Kong protests. The movement has directly challenged the Chinese regime’s authority by calling out Beijing’s influence in the former British colony, which reverted to Chinese rule in 1997.

The message, although soon deleted, ignited a fiery response from Chinese media outlets and businesses. Although the United States’ National Basketball Association (NBA) has issued a statement apologizing to its Chinese fans, the backlash in China continues, with more of NBA’s Chinese partners cutting business ties.

On Oct. 8, Chinese state broadcaster CCTV announced that it would not broadcast the upcoming NBA pre-season games, while Chinese smartphone maker Vivo, an NBA sponsor, said it has suspended all cooperation. Around 500 million people in China consume NBA content, according to sports news site ESPN.

Stateside, lawmakers and business leaders continued to criticize the NBA for placing profits over freedom of speech.

Lawmakers on both sides of the aisle, including Senators Marco Rubio (R-Fla.) and Bob Menendez (D-N.Y.), and Majority Leader Mitch McConnell (R-Ky.) have also rebuked NBA for its handling of the incident.

“The people of Hong Kong have risked much more than money to defend their freedom of expression, human rights, and autonomy,” McConnell said on Twitter Oct. 8. “I hope the NBA can learn from that courage and not abandon those values for the sake of their bottom line.”

Other international firms are also tiptoeing around the Hong Kong issue to avoid offending the Chinese regime. On Oct. 7, New York-based luxury jewelry retailer Tiffany & Co., which has 34 stores in China, deleted a tweet showing a model covering her right eye after Chinese netizens interpreted it as supporting the Hong Kong protests—similar to Wang’s case.

A Tiffany spokesperson said that the image was created in May, before the mass protests broke out, and was not intended to be a political statement.

“We regret that it may be perceived as such, and in turn have removed the image from our digital and social media channels and will discontinue its use effective immediately,” Tiffany spokesperson Nathan Strauss told Reuters in a statement.

Shoe brand Vans took down a submission for its sneaker design competition that conveyed messages of support to Hong Kong. The design—the most popular by online voting—features figures wearing helmets and masks, as well as a yellow umbrella, all symbols of current protests.

“We have never taken a political position and therefore review designs to ensure they are in line with our company’s long-held values of respect and tolerance,” Vans said in an Oct. 5 statement on Facebook.