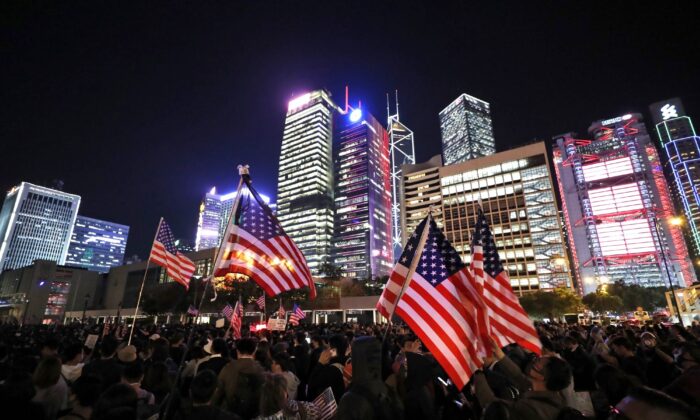 Investors fear the signing of these measures could disrupt the recent progress between the two countries on a “phase one” trade deal. Analysts, however, express a confident view, saying that the U.S. support for Hong Kong will not stall the negotiations.

The first of the two bills Trump signed on Nov. 27 was the Hong Kong Human Rights and Democracy Act, which stipulates sanctions on both Chinese and Hong Kong officials who have violated human rights in the city.

“We believe it was inevitable that the bill would become law due to strong Congressional support,” Johanna Chua, a Citi economist based in Hong Kong, wrote in a report.

“Though there was some hope that President Trump would wait for the bill to automatically become law without signing, which could be less provocative to China,” she added.

The Hong Kong Human Rights and Democracy Act would require the U.S. Secretary of State to certify annually whether Hong Kong is “sufficiently autonomous” from China to warrant the special trade privileges currently afforded to it.

Since the signing of the bill, pro-democracy protesters held two rallies to thank Trump and U.S. lawmakers. The bill is widely seen by protesters as a form of economic pressure for the Hong Kong government and the Chinese communist regime, which relies on the financial hub as an important source of capital for the mainland.

The other bill signed by Trump prohibits the United States from exporting crowd control equipment to the Hong Kong police force.

The timing of the U.S. action introduces some risk of delaying the phase one U.S.-China trade deal due to political tensions, according to Chua.

“But we do not expect the [Hong Kong] bill to derail the prospect of the trade deal, as both sides are likely to separate the [Hong Kong] issue from the trade talks,” she stated. “It is our base case that the phase-one trade deal could be sealed by early 2020 with September tariff rollback.”

A new round of tariffs went into effect on Sept. 1 pertaining to more than $125 billion in Chinese imports. And if a deal is not reached by Dec. 15 an additional round of U.S. tariffs will kick-in.

Trump in a statement said that the measures were “enacted in the hope that Leaders and Representatives of China and Hong Kong will be able to amicably settle their differences leading to long term peace and prosperity for all.”

In October, the world’s two largest economies announced they had reached a partial trade agreement, in principle, on intellectual property, financial services, and agriculture.

Trump said that there could be two or three phases in the China trade talks. Both sides are currently working to finalize the phase one agreement for signing. However, uncertainty surrounding the timing of a summit between Trump and Chinese leader Xi Jinping still remains.

Last month, Trump suggested that both leaders could sign the partial agreement in the farm state of Iowa, which has been hit hard by the trade war.

The Citi analyst is not the only one who has expressed a sanguine view.

The Hong Kong Human Rights and Democracy Act is a “significant issue” for China, according to Amy Celico, principal at business strategy firm Albright Stonebridge Group.

“I don’t think it’s enough of an issue to derail the trade talks,” she told CNBC.

“There are still incentives on both sides to push for a deal, provided they can agree on the terms,” Julian Evans-Pritchard, senior China economist at Capital Economics told the BBC.

The tension also dampened some of the positive sentiment in the stock market on Nov. 29.