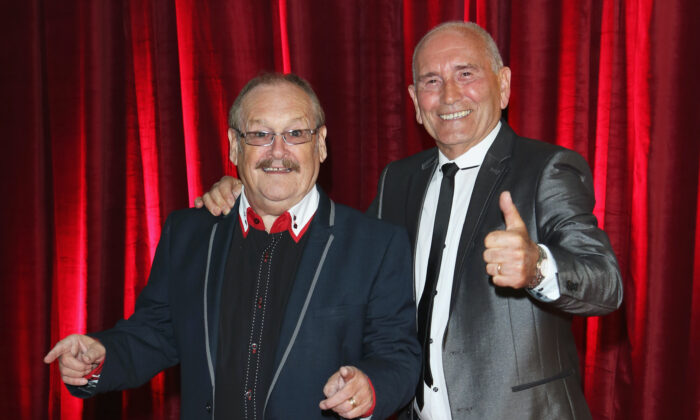 British Comedian Bobby Ball, who became a household name as part of the “Cannon & Ball” double act, has died at the age of 76 after testing positive for COVID-19.

His death was announced this morning by his manager, Phil Dale, on behalf of his family and of his fellow entertainer and life-long friend Tommy Cannon.

Ball had been taken to Blackpool Victoria with breathing problems, Dale said. “At first it was thought to be a chest infection but a test proved positive for COVID-19,” he said in a statement.

“His wife Yvonne said the hospital and staff could not have been more wonderful, as they were outstanding in their care of duty and they did everything possible for him, and she cannot praise them enough,” Dale said in an emailed statement.

“She said that the family and Tommy would like to express their sincere thanks to the many, many people who have been fans of Bobby, and they know that they will all share in part the great loss and total sadness that Yvonne, the family, and Tommy all feel.”

Ball was best known for the “Cannon & Ball” act, crafted over a lifetime with his friend Tommy Cannon.

Their primetime Saturday night television series based on their act lasted for 12 years and was one of LWT’s most successful entertainment shows.

Their double-act—a mixture of entertainment, slapstick, and wordplay—continued on stage after the end of the TV show, with performances scheduled this year.

During the double act, Ball would pull on his braces while saying, “Rock on, Tommy.”

Referencing the catchphrase in a tribute, Cannon, said, “Rock on, my good friend. I can’t believe this. I’m devastated.”

Ball has also starred in various other television shows, including “Last of the Summer Wine” and “Heartbeat.”

Since 2009, Ball has played the character of Frank in the long-running BBC One sitcom “Not Going Out.”

“Bobby was a true comedy star who loved entertaining people, and he loved life itself,” Dale said. “I spoke to him every day and it would always end in laughter.”

Yvonne, Ball’s wife of 46 years, said, “I will always miss him, he was so joyful, full of fun, and mischievous.”

Tributes poured in on social media from across the comedy and entertainment world.

“Just heard the sad news that the wonderful Bobby Ball has died,” wrote Les Dennis on Twitter. “He was a true entertainer with real funny bones.”

How to Socialize at Sundance 2021 from Your Living Room

New Movies: Release Calendar for January 22, Plus Where to Watch the Latest Films
‘Gunda’ Is Not Vegan Propaganda, but It Is a Revolution of Empathy