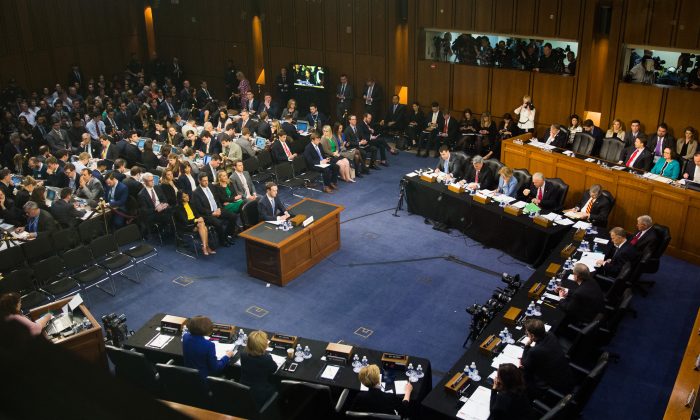 After a seemingly endless stream of conservative personalities being banned from social media platforms, the right-leaning community and even many anti-censorship folks on the left have increasingly backed the idea that the government, not the private sector, may need to step in after all.

Conservatives have been reluctant to embrace government intervention in big tech’s policing of content, even while largely disagreeing with the policing framework, which includes a heavy focus on stamping out “hate speech,” a hatchling of the ideology of political correctness bemoaned by a majority of Americans, but more vocally on the right.

But with the censorship showing no sign of abating, ideas are beginning to be formulated by representatives on how to counter it.

One of the most commonly debated ideas is stripping social media of their “platform” designation if they continue to enforce rules akin to editorial policy.

Interactive computer services providers are shielded from liability for content created by their users under the Section 230 of the Communications Decency Act of 1996.

Some conservatives have argued that social media giants like Facebook and Twitter have gone so far in restricting, filtering, and sorting users’ content on their platforms that they should be treated as providers of that information, and thus be liable for it.

“Twitter … can’t say on one hand, ‘We’re neutral and thus we shouldn’t have to respond to lawsuits,’ and then, on the other hand, tell me and other outspoken conservatives that our behavior results in suppression on their platform,’” said Rep. Matt Gaetz (R-Fla.) on Fox News on July 27. “They can’t have it both ways.”

Gaetz and at least three other Republican lawmakers had their accounts hidden from search suggestions on Twitter in 2018, until the company restored the functionality under media pressure. Twitter said the issue affected tens of thousands of accounts, but Gaetz questioned why among lawmakers only Republicans seemed to had been affected and filed a complaint against the company with the Federal Election Commission (FEC).

Rep. Devin Nunes (R-Calif.), former chair of the House Intelligence Committee, made a similar argument in a defamation and negligence suit against Twitter and several Twitter users, claiming damages of at least $250 million.

“Twitter uses its platform, including proprietary algorithms, selectively to convey its corporate/institutional viewpoint, its position on issues and candidates for office,” the suit states.

“When they’re regulating us … and then they’re proliferating out things that they agree with with the algorithms that they develop, they need to come clean—they are not a ‘public square,’ they are content developers.”

The tech companies have denied political bias in their content policing, but some parts of their content rules, especially those on “hate speech,” could be described as partisan.

Google, Twitter, and Facebook have also “gradually shifted away from unmediated free speech and towards censorship and moderation,” according to a Google internal research document from March 2018 that was leaked to Breitbart.

Moreover, by aligning themselves with the progressive ideology of political correctness, the companies have picked a minority position, since 52 percent of American are against the country becoming more politically correct and are “upset that there are too many things people can’t say anymore” versus 36 percent who are “in favor of the United States becoming more politically correct,” according to a Nov. 28–Dec. 4 NPR/PBS/Marist poll (pdf). The responses were noticeably partisan, with 55 percent of Democrats wanting more political correctness and just 14 percent of Republicans wanting the same.

Treating heavily moderated social media as publishers may force them ease some of the more draconian content regulation, but it would depend on where the courts draw the line between platform and publisher.

The Blumenthal v. Drudge case of 1997 established that online platforms are immune to defamation suits under Section 230 even if they give a special platform to certain users. The company would only be liable if it solicited the defaming content itself, said Eugene Volokh, law professor and First Amendment expert at the University of California in Los Angeles, in a prior phone call.

Back then, there was no Facebook or Twitter, so it remains to be seen where the courts will draw the line now. Nunes’s suit may give judges the opportunity to address that.

Another anti-censorship idea has been getting traction recently—making online platform access a civil right. As the argument goes, private businesses like hotels, restaurants, theaters, and banks had the right to refuse service to black people until the Civil Rights Act of 1964. Thus, it has been suggested that if an online platform opens its doors to the public, it shouldn’t exclude or disadvantage people based on political beliefs either.

One of the proponents of this idea is conservative lawyer Will Chamberlain.

“Free Speech is more than the First Amendment, which only protects you from the government infringing on your rights,” he said in a May 3 article on Human Events, an online media of which he’s the publisher. “In 2019, that is woefully inadequate. Access to the large social media platforms—Facebook, Twitter, and Instagram—is a prerequisite to meaningful free speech in 2019.”

He proposes that conservatives should have legislation passed on both state and federal levels that would prohibit large social media platforms from banning users who didn’t engage in unlawful speech.

“If a large social media company wrongfully denies you access to or removes you from their platform,” he said. “You should be able to walk into court, get an injunction against the company that forces them to restore your account, and be awarded substantial statutory damages.”

He points out that this approach wouldn’t necessarily give more power to government regulators, since it would be handled by courts, which are bound by a robust case law on what is and isn’t lawful speech.

While the federal government is less likely to act on the issue, Republican-led state legislatures may be sympathetic, he argued. Even if just one state threatened lawsuits and fines on these tech companies, it may force them to change their behavior.

But there’s a problem with this approach—Section 230 specifically says that online platforms and their users shouldn’t be held liable for “any action voluntarily taken in good faith to restrict access to or availability of material that the provider or user considers to be obscene, lewd, lascivious, filthy, excessively violent, harassing, or otherwise objectionable, whether or not such material is constitutionally protected.”

Federal law trumps state law, so as long as the companies can make an argument that they sincerely believe some conservative positions to be “objectionable,” they would still be free to block them.

Amending Section 230 would currently be a long shot in the split Congress, where each party controls one chamber.

Follow Petr on Twitter: @petrsvab
2019-05-13T17:30:07-05:00
Go Back: Tech
Previous: Supreme Court Rules Against Apple, As Kavanaugh Sides With Liberal Justices
Next: When Technology Can Be Used To Build Weapons, Some Workers Take A Stand
source : www.theepochtimes.com
''