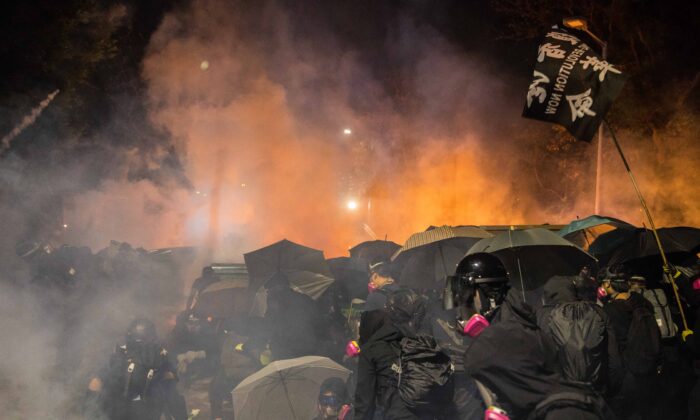 The Hong Kong police have raided several universities, attempted to make arrests, and clashed with student protesters who set up barricades to defend the campus. In particular, the Chinese University of Hong Kong (CUHK) was apparently the main focus of the police, and became a literal battleground. Many CUHK students suspect that the real goal of the police is to control the internet, as Hong Kong’s internet center which handles 99 percent of the city’s internet traffic is located inside the CUHK campus.

The police fired multiple rounds of tear gas, rubber bullets, bean bag rounds and a water cannon on Nov. 12. Students retaliated by throwing bricks and petrol bombs at the police. At least 60 students were injured, several were hit in the head. A reporter at the scene was also hit by rubber bullets in the head and lost consciousness, according to local media.

Even CUHK Vice Chancellor Rocky Tuan, who tried to negotiate with the police as a peacemaker, was among those affected by tear gas.

Many are wondering why the Hong Kong police focused on CUHK when almost all universities in Hong Kong are involved in anti-government protests. What’s more, the police seemed to be very determined to take control of the campus. Is there anything unique and special about CUHK? The answer is yes. CUHK is the hosting university of Hong Kong Internet eXchange (HKIX)—the internet exchange center of Hong Kong.

HKIX is a cooperative project initiated by the Information Technology Services Centre of CUHK, providing service free of charge. It is now operated by HKIX Limited, a wholly owned subsidiary of the CUHK Foundation.

The function of HKIX is to connect internet service providers (ISPs) in Hong Kong so that intra-Hong Kong traffic can be exchanged locally without routing through the United States or any other country. About 99 percent of Hong Kong’s internet traffic goes through the center. According to Cloudflare, HKIX is the largest internet exchange point in Asia.

Many CUHK students suspect that the police is actually going after HKIX, because taking control of HKIX means Beijing can either shut down the internet or monitor internet communications.

Based on the current situation, Hong Kong authorities are more likely to control the internet than shutting it down. In theory, every single message going through the HKIX center can be intercepted and monitored if the police gain access to the center.

Needless to say, the Chinese communist regime and their Hong Kong puppet rulers indeed have the motivation to control and monitor the internet. For China’s top leaders, quickly quelling the protest in Hong Kong is now a number one political task, with a higher priority than the U.S.-China trade negotiations.