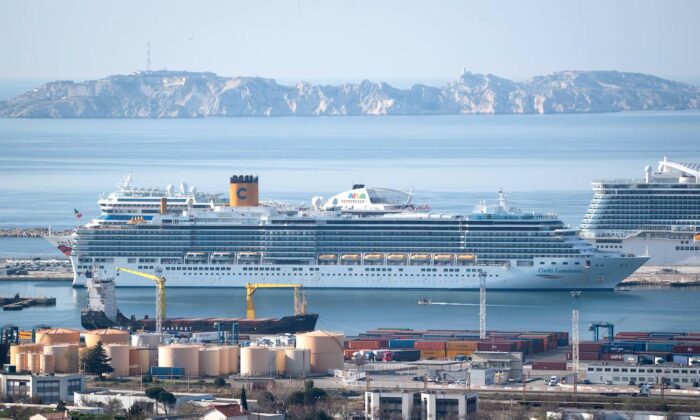 A former passenger of the Costa Luminosa filed a class-action lawsuit against Costa Cruises on April 7, claiming the cruise line failed to warn passengers about a potential exposure to the CCP virus and placing them at risk.

The plaintiff, identified as Paul Turner of Wisconsin, claims in his lawsuit (pdf) that the cruise line did not inform passengers about an individual who was previously aboard the vessel for a former voyage, who disembarked after displaying symptoms consistent with the CCP (Chinese Communist Party) virus, commonly known as the novel coronavirus.

Turner was a passenger aboard the Costa Luminosa which left Fort Lauderdale, Florida, on March 5 on a two-day cruise destined for Venice, Italy. By the time it docked in the French port of Marseille, just weeks later, 36 people on board had been infected with the CCP virus.

In his lawsuit, filed in the U.S. District Court, Southern District of Florida, by the law firm of Lipcon, Margulies, Alsina & Winkleman, the plaintiff alleges the cruise line made an “intentional decision” to push ahead with the cruise while knowing at least one passenger disembarked with potential symptoms of COVID-19, the disease caused by the CCP virus.

The lawsuit also alleges Costa Cruises—owned by the Carnival Corporation—deliberately attempted to “conceal” this information from passengers aboard the cruise which departed from Florida.

“In so doing, Costa subjected over 2,000 passengers to the highly contagious coronavirus, and exposed passengers to actual risk of immediate physical injury and death,” court papers state.

Three days after the cruise departed, an elderly couple disembarked at its first stop in Puerto Rico, displaying potential CCP virus symptoms. They were later hospitalized and tested positive for the virus. Four other unwell passengers later disembarked on the Spanish Canary Island of Tenerife.

The prefecture said that before docking in Marseille, the Costa Luminosa had declared to authorities that 75 people had symptoms of the respiratory disease or had been in contact with people with it.

Turner alleges that the cruise line pushed ahead with the cruise despite being aware of a travel advisory issued by the U.S. Centers for Disease Control and Prevention on March 8 recommending Americans avoid all cruise travel.

“Instead, they were dragged across the Atlantic in a ticking coronavirus time bomb,” the suit alleges.

“Put simply, Costa recklessly and intentionally put thousands of its passengers through a living nightmare so it could protect its bottom line.”

The plaintiff is seeking all damages available under the law, including punitive damages, according to the lawsuit.

Costa Cruises said in an emailed statement: “Costa Crociere confirms that the case has been filed. According to its policy the company does not comment on open judicial cases but places the utmost confidence in the judicial authorities.”

Go Back: US News
Previous: Opinion: Are We Inflating the Numbers on Wuhan Virus? Of Course We Are!
Next: Over 100 Prisoners Protest at Correctional Facility in Washington After 6 Cases of CCP Virus
source : www.theepochtimes.com
''