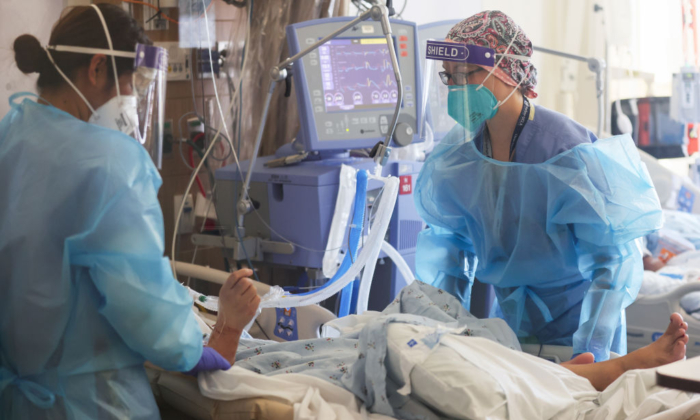 As of Jan. 24, there were 1,732 people hospitalized countywide with the disease, 467 of whom are in the intensive care unit (ICU), according to the Orange County Health Care Agency. Those numbers are down from 1,818 and 482 on Jan. 23.

The county’s state-adjusted ICU bed availability remains at zero, and the unadjusted figure decreased from 9.6% to 9.5%. The state created the adjusted metric to reflect the difference in beds available for COVID-19 patients and non-coronavirus patients. The county has 35 percent of its ventilators available.

Orange County’s seven-day test positivity rate was 16.7 percent on Sunday, up from 14.5 percent on Jan. 22.

“It’s a continuation of the trends we’ve seen,” Orange County chief executive Frank Kim said late last week. “What this tells me is that all of the indicators are consistent. The testing rate is still high, so these aren’t false numbers. Hospitalizations are down, the ICUs are trending down and the case positivity is coming down.”

But, he added, “If you look at our numbers they’re still very high compared to where we were before early November and the holidays, so it’s not time to celebrate yet.”

The county’s Health Equity Quartile Positivity Rate, which measures the cases in highly affected, needier parts of the county, declined from 24.2 percent last week to 21.2 percent.

Vaccinations at the inaugural super point of distribution (POD) site at Disneyland continued, after wind-driven closures Jan. 12 and Jan. 14. So far, the county has vaccinated about 55,000, Kim said.

The county’s app and website, Othena, is functioning much better after some bugs were ironed out, Kim said.

“We have a virtual queue now so the one issue we’ll get is people will get frustrated they’re not hearing from us because they’re number 250,000 in the queue,” Kim said. “But you no longer have to smash the buttons and try to get in when 3,000 slots open up.”

There have been some complaints on social media from users who said they were turned away with an appointment, but Kim said about two dozen people not qualified in the state’s first tier for vaccines have shown up with appointments demanding shots. If they don’t meet the standards for the first phase, they have been turned away, Kim said.

The latest Super POD site for vaccinations opened Jan. 23 at Soka University of America in Aliso Viejo. There are about 2,500 to 3,000 appointments registered for Soka so far, Kim said.

The county hopes to ultimately open up to five large-scale vaccination sites, but until supplies of vaccines are assured, it likely won’t happen.

With the post-holiday case surges and deaths, the Orange County Sheriff’s Coroner’s Department has had to provide trailers with freezers to store an average of about 100 bodies until funeral homes can catch up and take them, Kim said.

Supervisor Lisa Bartlett said there have been problems with hospitals getting bodies to the coroner’s freezers, which have capacity for 1,100 bodies, because physicians are struggling with the paperwork as they care for patients.

Other issues include caps on cremations, which the county may have to lift, and burials at cemeteries, which will have to be negotiated with union workers, Bartlett said.

The outbreak in the county’s jails has continued to decline with the number of infected inmates dropping from 61 to 55 on Jan. 22.

There are 15 Orange County residents being treated at Fairview Developmental Center in Costa Mesa, which was set up to handle overflow from local hospitals, and 11 patients from Los Angeles County.

Mobile field hospitals, which have been set up to help medical centers triage COVID-19 patients, are in operation at University of California –Irvine, which added 50 beds, Fountain Valley Regional Hospital and Medical Center, 25 beds, and St. Jude’s Hospital in Fullerton with 52 beds, Kim said.

Officials are in the process of setting up or discussing mobile field hospitals at Mission Hospital in Mission Viejo and Los Alamitos Medical Center.

Can political affiliation be a “protected class?”