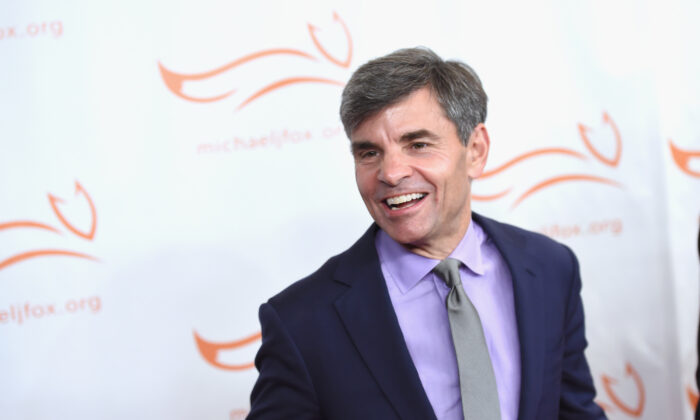 Critics are expressing concerns about the partisan history of ABC News Anchor George Stephanopoulos and the lack of disclosure as he covers major issues, including the impeachment efforts against President Donald Trump.

Along with impeachment, there are fears he could have played a role in ABC killing a major story about convicted sex offender Jeffrey Epstein, who Stephanopoulos spent time with after the conviction.

Stephanopoulos, 58, was a top aide to Democratic President Bill Clinton, working with Clinton’s 1992 campaign before serving in various roles in the White House until 1996. He joined ABC the next year and has risen to be ABC News’ chief anchor.

“It’s as if Sean Spicer were now anchoring the news for a network—what would they say?” Rich Noyes, research director for the conservative Media Research Center, told the Washington Times. “People were going nuts because he was on ‘Dancing With the Stars.’ The idea that he could be anchoring anything or in charge of news judgment or even influencing editorial news decisions would send people into fits.”

Stephanopoulos’s role in the Clinton White House was never fully disclosed to viewers of ABC, whether they’re watching the anchor on “This Week,” “Good Morning America,” or another program. The past was highlighted in 2015 when it was reported Stephanopoulos failed to disclose $75,000 he donated to the Clinton Foundation between 2012 and 2014, ultimately prompting an apology.

Stephanopoulos dropped out of moderating debates for the 2016 election, but was back on stage on Sept. 12, helping moderate a Democratic presidential debate.

With the impeachment inquiry against Trump being driven entirely by House Democrats—not a single Republican voted for the resolution to move the inquiry forward—Stephanopoulos is again under the microscope.

“It would be the most ethical thing not to report on the Clintons, not to comment on the Clintons, not to discuss impeachment and Clintons and Epstein with any of your guests, but how can he host his morning show if he can’t talk about all of those things, this week of all weeks?” Patricia Gallagher Newberry, president of the Society of Professional Journalists, told the Washington Times.

“From now until he dies, he’s part of the Clinton crew. When he dies, his obituary in the lede will be, ‘George Stephanopoulos, a one-time Clinton staffer.’ It’s going to follow him to the grave. And yet ABC has employed him for an awful long time, and apparently accepts that as the trade-off for somebody who’s a popular television figure.”

That history is also provoking questions from people who watched ABC anchor Amy Robach say in video footage recently published by Project Veritas that ABC killed a major story about Jeffrey Epstein despite her having “everything,” including photographic evidence of the claims made by woman who said Epstein abused her while she was a minor.

“Is the fact that George Stephanopoulos is a big figure there [at ABC], is that the reason they didn’t run it?” Newberry told the Washington Times. “I don’t think we’ll ever get to that being a confirmed fact. But sometimes just the taint of the ‘maybe’ can be difficult for a network to deal with.”

“And when was this information given to Robach at ABC? When did she bring all this to her executives to say we should put this on the air? Right before the 2016 presidential election when Hillary Clinton was running on the Democratic ticket,” she added.

“This all comes down to the Clintons, George Stephanopoulos working at ABC, and the circle of connections that they have there, and protecting not just the Clintons of course, because that is something that they are willing to do for political purposes,” Pavlich continued.

“According to ABC’s editorial standards, which we keep hearing about, the standards aren’t about necessarily accusers bringing forward evidence on someone who had already been convicted of similar crimes, but instead to protect political people and friends who are beneficial to them and who have very, very close connections to people in their network who claim to be leading journalists, like George Stephanopoulos.”

An ABC spokesperson later told Fox News that Stephanopoulos had “no involvement” in Robach’s interview.

Bill Clinton spent time with Epstein while he was in office and shortly after leaving office, but seemed to break the connection before Epstein was charged with molesting dozens of girls. Epstein ultimately agreed to plead guilty to soliciting prostitutes under 18 and served about a year in prison.

After he was released, Epstein in 2010 held a party at his New York City mansion—where a painting of Clinton dressed as Monica Lewinsky was later found—featuring Prince Andrew and a slew of Hollywood and media elite, including Stephanopoulos and Katie Couric, a top CBS host and correspondent at the time.

Pressed on why he attended, Stephanopoulos again apologized, saying: “it was a mistake.”