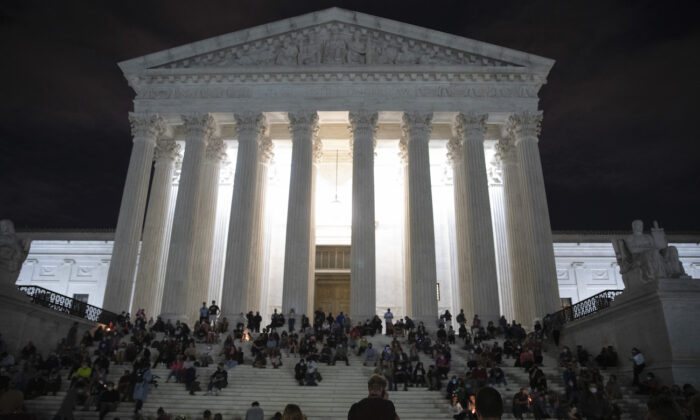 “This U.S. Senate should vote on President Trump’s next nominee for the U.S. Supreme Court,” Sen. Martha McSally (R-Ariz.) wrote on Twitter.

“I believe the president should next week nominate a successor to the court and I think it is critical the Senate takes up and confirms that successor before election day,” Sen. Ted Cruz (R-Texas) told Fox’s Sean Hannity. “This nomination is why Donald Trump was elected.”

Ginsburg passed away on Friday evening surrounded by her family in her home in Washington, D.C., according to a statement from the Supreme Court. She died of complications from cancer, which she has battled for years.

President Donald Trump, who recently announced a list of additional potential Supreme Court nominees, responded to the passing of Ginsburg’s after learning of the news from reporters on a tarmac in Minnesota.

Sen. Diane Feinstein (D-Calif.), the top Democrat on the Senate Judiciary Committee, wrote on Twitter that the Senate should not vote on a nominee until the winner of the election on Nov. 3 is inaugurated.

“Under no circumstances should the Senate consider a replacement for Justice Ginsburg until after the presidential inauguration,” Feinstein wrote. “Senator [Mitch] McConnell made his position clear in 2016 when he held Justice Scalia’s seat vacant for 10 months to deny President Obama an appointment.”

“The American people should have a voice in the selection of their next Supreme Court Justice. Therefore, this vacancy should not be filled until we have a new president,” Senate Majority Leader Chuck Schumer (D-N.Y.) wrote on Twitter.

McConnell, after offering his condolences, said in a statement that Trump’s nominee will get a vote on the Senate floor. In addressing expected criticism based on GOP blocking Obama’s nominee for the seat vacated by Scalia, he pointed out that no Senate since the 1880s has confirmed an opposite party’s Supreme Court nominee in an election year.

“If Republicans go forward and reverse the precedent they set in 2016, the Senate will never, ever be the same. It will be changed forever,” Sen. Chris Murphy (D-Conn.) wrote on Twitter. “I pray tonight that at least a few of my Republican colleagues understand this.”

Days before her death, Supreme Court Justice Ruth Bader Ginsburg dictated a wish about her potential replacement to her granddaughter.

“My most fervent wish is that I will not be replaced until a new president is installed,” Ginsburg said, according to NPR.

Senators Lindsey Graham (R-S.C.), Marco Rubio (R-Fla.), Chuck Grassley (R-Iowa) did not address the potential of a Supreme Court nomination and a Senate vote in their statements on Ginsburg’s passing.

“The most difficult months in a generation are now upon us. Pray that God protect our country and provide wisdom to our people,” Rubio wrote on Twitter.