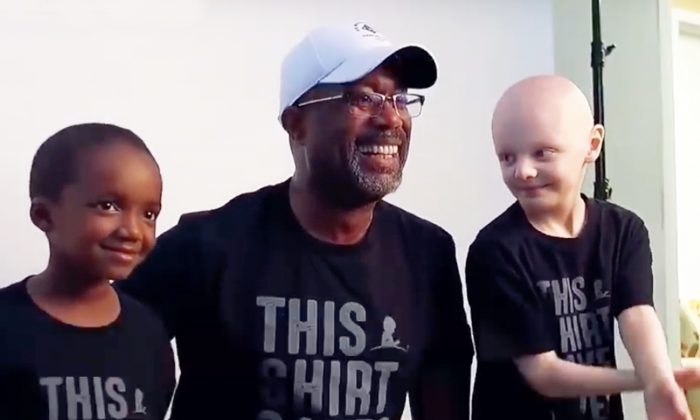 Some of country music’s most treasured moments have nothing to do with dulcet tones and record sales. Country star Darius Rucker has added a string to his already accomplished musical bow by doing something totally awesome; Rucker has used his talent to raise huge funds for St. Jude Children’s Research Hospital.

Rucker held his 10th annual “Darius and Friends” benefit concert on Monday, June 3, 2019. A golf tournament and silent auction followed the very next day, and the 2019 event in total raised a spine-tingling figure of over $425,000. This brings Rucker’s cumulative total to over $2 million.

Rucker took to Twitter to post his heartfelt gratitude. “10 years ago I visited @StJude and knew I wanted to do everything I could to help those kids and the amazing doctors who work tirelessly to find cures,” he wrote. “Because of all of you, we’ve raised over 2 million dollars for them. Thank you.”

10 years ago I visited @StJude and knew I wanted to do everything I could to help those kids and the amazing doctors who work tirelessly to find cures. Because of all of YOU, we’ve raised over 2 million dollars for them. Thank you. #DariusandFriends 🙏 https://t.co/gGhqFgtbIl pic.twitter.com/hQh1DXxUzs

Rucker originally found fame in the pop-rock arena as a member of Hootie & the Blowfish. “I had finished a Hootie tour and I was a baby act on a Brad Paisley-Dierks Bentley tour,” Rucker told St. Jude’s Inspire magazine. “I was hanging out with Dierks and Brad, and Dierks said he was going to St. Jude. He asked if I wanted to go.”

Rucker then joined Dierks for a trip that would change his whole perspective on life, not to mention his fundraising ambitions.

Darius Rucker is a leading light of country music’s support of St. Jude. His annual Darius and Friends benefit concert…

“I was struck on that first visit by how St. Jude not only cares for their patients but also their patients’ families,” Rucker told WKRN. “They believe that a financial burden is the last thing a family should face when their focus needs to be on helping a kid get better.” St. Jude, he added, makes sure that their patients never pay a cent.

Rucker, 53, was once a poor kid in South Carolina, whose mom raised him to be selfless. “She was a nurse, and trying to raise these kids,” Rucker shared. “But she always instilled in us that if we could help somebody, we should.”

Overwhelmed with gratitude… With your help, Darius and Friends raised $122K for St. Jude Children's Research Hospital. Thank you to everyone who helped make this possible!

At the “Darius and Friends” extravaganza, Rucker was joined by a brigade of huge names from the country music scene, including Jimmie Allen, Luke Bryan, and Sheryl Crow. Over 2,400 fans packed into the auditorium.

“It’s such an amazing thing,” Rucker exclaimed. “We sell out in minutes, every time. Then all these big names come,” he gushed, proud and grateful. “Everybody we’ve ever asked has said yes.”

St. Jude confirmed that Rucker is a regular visitor at the hospital. The musical talent even penned a song inspired by a St. Jude patient, which was co-written by the patient’s dad. “The emotive “Possibilities” was released in 2014.

The generous Rucker is something of an overachiever, it seems! In addition to raising millions, he announced on June 9 that he is extending his Summer Southern Style tour, and Fox News visited the tour bus to chat with the country star.

“Jack, my son, actually loves to cook,” Rucker shared, gesturing to a bursting refrigerator stocked with the “joys of home.” He added, with fatherly love: “He thinks he’s a chef. You are a chef, buddy!” Rucker’s daughters also make time to visit their dad on the road, and with such a close family it’s not hard to see why St. Jude is a cause so dear to Rucker’s heart.

“It’s an honor for us to be able to help them continue their mission,” he told WATN-TV. Long may it continue!

Go Back: Entertainment
Previous: ‘Dark Phoenix’: The Mutant With the Strongest Superpower Can’t Save the Franchise
Next: Harry Belafonte’s Granddaughter Sarafina Is Sweet Sixteen, and She’s Turning Heads
source : www.theepochtimes.com
''