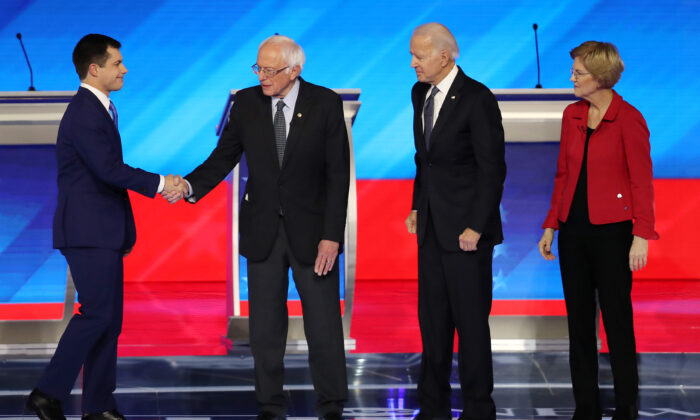 As the Nevada Democratic caucuses approach and with the field of 2020 presidential contenders narrowing further, a few of the top candidates sought to make their voices heard on Sunday’s national television circuit.

Buttigieg said on Feb. 16 that his campaign would be able to improve its standing with minority voting blocks in New Hampshire and made an apparent dig at billionaire Tom Steyer who has spent over $100 million so far.

“We’ve seen how fluid it is, of course I don’t have billions of dollars of my own money to pour into the airwaves,” he told Fox News Sunday.

Buttigieg said that his campaign has over a hundred organizers on the ground in New Hampshire. He was also asked about the high number of candidates competing for the moderate lane that could split up the moderate vote, leaving the nomination open to Sanders.

“I think that’s what voters right now are in the process of settling,” he said. “… We also can’t do it by telling people that their only options are between a revolution and the status quo.”

Sanders and Warren both did not appear to be booked on any talk shows for Feb. 16. Sanders is speaking at a rally in Denver, Colorado.

Meanwhile Biden, who got poor results in New Hampshire and Iowa, said on Feb. 16 that he has wider support from the African American community nationally. The South Carolina primary is also approaching on Feb. 29.

“I’m the only one who has the record and has the background and has the support. They know me,” Biden told NBC’s Meet The Press. “They know who I am,” referring to African-Americans.

An average of polling data aggregated by Real Clear Politics placed Sanders at the top with 23.6 percent of the vote. Behind him was Biden with 19.2 percent followed by former New York mayor Michael Bloomberg with 14.2 percent, Warren with 12.4 percent, and Buttigieg at 10.6 percent. The rest of the field polled in the single digits.

Klobuchar used some of her time on talk shows to criticize Bloomberg’s heavy spending in the election. Bloomberg has shot up in some of the nationwide polls in recent weeks.

When asked to comment on reports alleging that Bloomberg objectified women, Klobuchar said Bloomberg should sit down for a television interview.

“He has not come on any Sunday show since he announced,” she added.

Klobuchar also said her campaign has raised over $12 million since the Feb. 8 debates in New Hampshire.

Bloomberg’s campaign on Feb. 15 responded to a report that he is considering former Democratic nominee Hillary Clinton as his running mate.

The Drudge Report, citing a source close to the candidate’s campaign, reported that Bloomberg was considering Clinton after a source said that polling data revealed that a “Bloomberg-Clinton combination would be a formidable force.”

Bloomberg’s campaign did not confirm or deny the report. In an emailed statement, the campaign’s communication director Jason Schechter said, “We are focused on the primary and the debate, not VP speculation.”

President Donald Trump, meanwhile, recently shared a Twitter post from one his political action committees which stated, “Not a single Democrat will openly denounce socialism or a socialist candidate. This is the true Democratic Party.”

Study: Coronavirus arrived in New York in mid-February — from Europe

Harris poll shows broad bipartisan consensus on China’s lying about COVID-19 — so why does media use their data?