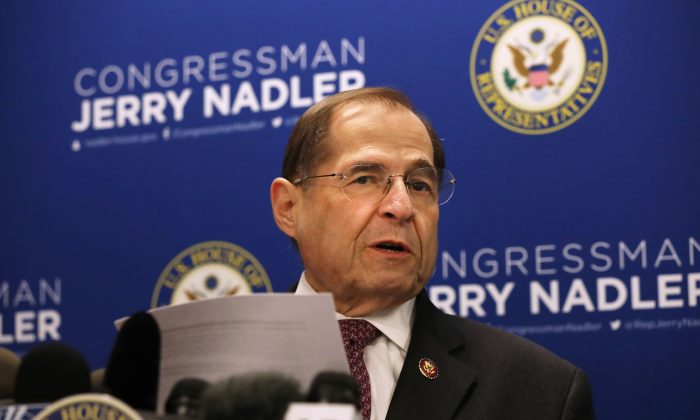 The House Judiciary Committee announced a witness panel on Monday including four constitutional scholars for its first impeachment hearing.

The hearing, titled, “The Impeachment Inquiry into President Donald J. Trump: Constitutional Grounds for Presidential Impeachment,” will include testimony from Jonathan Turley, a professor of public interest law at George Washington University Law School; Noah Feldman, a professor at Harvard Law School and director of the Julis-Rabinowitz Program on Jewish and Israeli Law; Michael Gerhardt, a professor at the University of North Carolina School of Law; and Pamela Karlan, a professor of public interest law at Stanford Law School, according to the Judiciary Committee (pdf).

Turley is a contributor at The Hill and has been critical of the Democrats’ impeachment case, including a recent piece from several days ago, titled, “Watergate line speaks volumes about weak impeachment case.”

In the article, he claimed that House Intelligence Committee Chairman Adam Schiff (D-Calif.) appeared “to struggle to reduce the harsh allegations against Richard Nixon in order to elevate those against Donald Trump” and disputed claims from Schiff and other Democrats that the impeachment case against President Trump is worse than the one against former President Nixon.

“The Nixon impeachment began with a felony crime with the Watergate burglary, then swept to encompass an array of other crimes involving political slush funds, payments of hush money, maintenance of an enemies list, directing tax audits of critics, witness intimidation, multiple instances of perjury, and even an alleged kidnapping,” he wrote.

Later, he wrote that it is hard to determine the “’devastating’ aspect of such an incomplete record against Trump as it exists today, let alone the claim that Trump has ‘outnixoned’ Nixon. That is why, whatever ‘this’ is, in the words of Schiff, it is not Watergate.”

Meanwhile, Feldman, writing for the New York Times, made the claim in October that Trump has created a “constitutional crisis” and echoed allegations made by House Democrats in the opinion piece.

In October, Gerhardt said that lawmakers in the House need to take a far more meticulous approach towards impeachment.

“It’s a political process that’s authorized by the constitution,” Gerhardt told local station ABC11. “The more it seems rushed, the less credibility. It should be a meticulous and slow process because impeachment, if done right and reaching a conclusion of convicting and removing someone from office, it has a final outcome that can’t be undone any other way.”

On the current inquiry, he added, “Here the evidence should matter and for the process to work, it’s got to be built on facts—not suspicion and not partisan rumor.”

House Judiciary Committee Chairman Jerrold Nadler (D-N.Y.) said the hearing on Wednesday, Dec. 4 is an opportunity to talk about “the constitutional framework through which the House may analyze the evidence gathered in the present inquiry.”

White House counsel Pat Cipollone sent a letter to the longtime Democratic congressman on Sunday informing him that the White House won’t partake in the hearing.

“As for the hearing scheduled for Dec. 4, we cannot fairly be expected to participate in a hearing while the witnesses are yet to be named and while it remains unclear whether the Judiciary Committee will afford the president a fair process through additional hearings,” Cipollone told the committee. “More importantly, an invitation to an academic discussion with law professors does not begin to provide the president with any semblance of a fair process. Accordingly, under the current circumstances, we do not intend to participate in your Wednesday hearing.”

Go Back: US News
Previous: Carter Page Loses Appeal in Defamation Suit Against Oath, US Agency for Global Media
Next: Challenge to New York’s Restrictive Gun Laws May Fail Due to Passage of New Law
source : www.theepochtimes.com
''

Trump Calls on Portland Mayor to Use National Guard Amid Unrest

Russiagate’s Halper in Jan 2017: ‘I Don’t Think Flynn’s Going to Be Around Long’

Trump Denies Asking to Get His Face Onto Mount Rushmore

Trump: Nomination Acceptance Speech Will Be in Gettysburg or DC