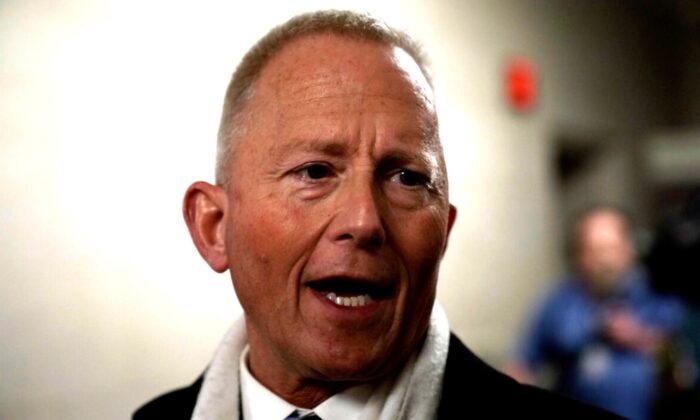 In the House, Judiciary Chairman Jerrold Nadler (D-N.Y.) told ABC News that Van Drew, who has indicated he will not vote to impeach Trump, is “reacting to is public polling that shows he can’t get renominated.”

Nadler added: “His electorate in his district is 24 percent to renominate him and 60 percent to nominate somebody else.”

Nadler might be referencing a poll about Democratic primary voters in his district and not the general electorate, Patch.com noted. The poll of Democrats revealed that 69 percent of voters are more likely to support him in the next election if he voted to impeach Trump.

“Jeff Van Drew’s decision to switch parties is a betrayal to every voter who supported him in 2018–Democrats, Republicans and unaffiliated,” Sweeney told Patch.com. “But now he is out of the Democratic Party and, in November, we are going to take him out of Congress. We flipped the 2nd District from Republican to Democrat last year and we will do it again next year.”

Democratic Gov. Phil Murphy added fuel to the fire with a Twitter statement on Saturday that suggested Van Drew would receive no support after he said he would vote against impeachment.

“This party switch is cynical and desperate, and I am confident that a Democrat who shares the values and priorities of our Democratic Party will hold this seat,” he wrote. “Congressman Van Drew has long voted against core Democratic values. Betraying our party by siding with Donald Trump is the final straw, as grassroots activists, local party leaders in his district, and I have made clear in recent weeks.”

News of Van Drew’s potential party switch drew the attention of Trump, who wrote that it “would be big.” The congressman’s district voted in favor of Trump over Hillary Clinton in 2016 by a margin of 4 percentage points.

New Jersey’s 2nd Congressional District was held by former Republican Rep. Frank LoBiondo for 24 years before he announced his retirement. During the ensuing race, Van Drew defeated Seth Grossman, a Republican, who made a controversial social media post that prompted the National Republican Congressional Committee to withdraw its support, reported WHYY.

Van Drew and fellow moderate Rep. Collin Peterson (D-Minn.) were just two Democrats to vote against a resolution on the impeachment inquiry on Oct. 31, joining every Republican in the House. Peterson, who was elected in 1991, told a local news outlet on Saturday that he will not vote in favor of impeaching Trump and questioned House Democrats’ strategy.

The full House is expected to vote on articles of impeachment this upcoming week before the Christmas recess.

In an interview with Fox News last month, Van Drew explained why he doesn’t support impeachment.

“[The] Founding Fathers had vigorous debates of whether they would even allow impeachment in the Constitution,” he said at the time. “You don’t disenfranchise voters, millions upon millions of voters. Voters choose their leaders in America,” Van Drew added.

Go Back: US News
Previous: Trump Touts New Pro Sports Option for Service Academy Athletes
Next: Endeavors to unseat Trump is but a humiliation to Democrats, explained
source : www.theepochtimes.com
''