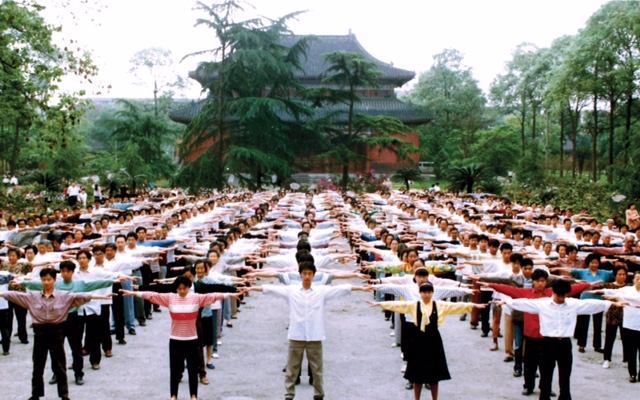 Falun Gong practitioners gather in a park in Chengdu City, China, for morning exercises some time in the 1990s, before the persecution against the meditation practice began. (Faluninfo.net)
Updated: 2020-04-07 13:16:02

Chinese Communist Party (CCP) organizations in some parts of mainland China have carried on with the 20-year campaign against adherents of Falun Gong, even as people around the country continue to contract and succumb to the CCP virus, commonly known as COVID-19.

Practitioners of Falun Gong, a traditional Chinese spiritual discipline, have been subjected to a relentless persecution that began in 1999, and which some scholars have described as a “cold genocide,” as well as the playbook for the current repression of ethnic minorities in the Xinjiang region.

Two of the CCP organizations, as highlighted in internal documents recently obtained by The Epoch Times, are the Harbin City School for Education and Transformation—a brainwashing center—and the city’s Anti-Heretical Religion Research Association, which falls under the direction of the Party’s Central Leading Group on Preventing and Dealing with Heretical Religions, informally known as the 610 Office.

“Heretical religion,” or “xie jiao” in Chinese, is a term used by the Communist Party to refer to all faiths in China that lie outside of the five officially recognized, state-controlled religions. The Party misleadingly translates the term into English as “cult” to lend legitimacy to its repression of faith.

First taught in 1992, Falun Gong consists of slow-moving, meditative exercises and moral self-improvement based on the principles of truthfulness, compassion, and tolerance. By the end of the 1990s, an estimated 100 million people were practicing Falun Gong in China for its reported health benefits.

The persecution of Falun Gong began in July 1999 under the leadership of then-CCP General Secretary Jiang Zemin. More than 1 million practitioners are believed to have been held in China’s prisons and labor camps, and thousands have been confirmed to have died from torture and other forms of abuse.

Last June, in reviewing evidence gathered by human rights organizations and investigative researchers, the independent London-based China Tribunal chaired by Sir Geoffrey Nice QC, ruled that the CCP had been harvesting the organs of those incarcerated for their faith, the majority of whom were Falun Gong practitioners.

One of the documents obtained by The Epoch Times was a legal certificate from the Harbin City School for Education and Transformation. The certificate indicates that the School is a brainwashing center, where personnel attempt to compel Falun Gong adherents to recant their faith in a process known as “transformation.”

According to the certificate, which is dated March 31, 2015 and effective through March 31 of this year, the facility was run under the direction of the 610 Office.

Another document is a report concerning bonuses awarded to personnel at the brainwashing center in 2017. A review of the individuals listed in the document shows that one of the staff, Sun Peng, served as acting vice-director of the School from June to September 2019.

‘Don’t Let Up’ the Repression

From what can be inferred from the documents, and in consideration of recent institutional changes in the Chinese regime’s security forces, there is some unclarity as to the current political status of the 610 Office.

Named for its founding date on June 10, 1999, the 610 Office was created on Jiang Zemin’s orders to direct and coordinate the persecution of Falun Gong.

Since 2012, when current Chinese leader Xi Jinping came to power, many officials and other prominent figures associated with Jiang have been arrested and purged in Xi’s anti-corruption campaign. The 610 Office, once a bastion of political forces loyal to the Jiang faction, lost prominence throughout the decade, with multiple personnel removed. In 2013, its director Li Dongsheng was placed under investigation and sentenced in 2016.

In March 2018, the CCP published a plan for a series of structural reforms intended to further centralize state and Party institutions under Xi’s central leadership. The plan called for the functions of the 610 Office to be folded into another Party organization—the Political and Legal Affairs Commission—and the Ministry of Public Security.

Previous analysis by The Epoch Times has examined the role that the persecution of Falun Gong played in Jiang Zemin’s political legacy, as well as how those in his faction have a stake in ensuring the campaign’s continuation.

Apart from the “anti-heretical religion” organizations in Harbin, similar groups around the country have been specifically holding training sessions for security personnel tasked with persecuting Falun Gong.

Some of the organizations have even compared the political importance of persecuting Falun Gong and other banned faiths to that of fighting the ongoing epidemic.

On Feb. 11, the Anti-Heretical Religion Association of Guangdong Province started an initiative titled “The Masses Are United in Fighting Heretical Religions, Form a Bastion of Collective Will to Fight the Epidemic.”

In March, the Anti-Heretical Religion Association in Guyang County of Inner Mongolia’s Baotou City ordered residents to be on guard against Falun Gong and other faiths. A report from the local authorities said, “Don’t let up stopping heretical religions during the counterattack against the epidemic.”

According to Minghui.org, a U.S.-based website that tracks the persecution of Falun Gong, 10 of the practice’s adherents were unlawfully detained throughout March in southern China’s Hunan Province. Some of the Falun Gong practitioners had their homes ransacked. The same month, in Hebei, the northern province that surrounds Beijing, Huai’an County authorities set up a brainwashing center to “transform” Falun Gong practitioners, and several were reportedly detained.