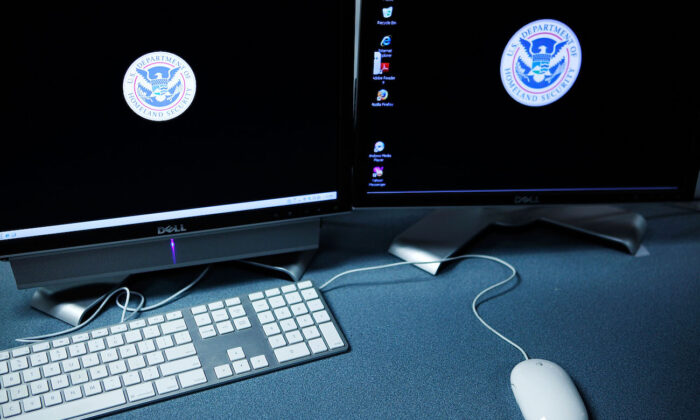 The logos of the U.S. Department of Homeland Security are seen on computer terminals of the Cyber Crimes Center of the U.S. Immigration and Customs Enforcement in Fairfax, Virginia, on Oct. 13, 2009. (Alex Wong/Getty Images)
Updated: 2021-02-26 07:03:11

The department said that it has, for the first time, marked domestic terrorism as a “national priority area” for preparedness grants. State and local governments receiving grants from the DHS will be required to use at least $77 million to “ensure we have the necessary capabilities to detect and protect against threats” from domestic violent extremism.

Agency chief Alejandro Mayorkas said in a statement that the most significant terrorist threats now come from “small groups of individuals who commit acts of violence motivated by domestic extremist ideological beliefs.”

“While we continue to lawfully protect against threats posed by foreign terrorist organizations, we also must ensure adequate focus and funding is provided to combat domestic terrorism, some of which is motivated by false narratives and extremist rhetoric spread through social media and other online platforms,” DHS Secretary Mayorkas said.

The grants will prioritize activities to counter extremism “including open-source analysis of threats, execution of threat assessment programs, the development and sharing of intelligence across states and between states and the federal government, and the development of training and awareness programs,” Mayorkas said.

In an op-ed for the Washington Post published late Thursday, Mayorkas wrote that the DHS is working to take immediate action to address domestic violent extremism, which “poses the most lethal and persistent terrorism-related threat to our country today.”

The United States has, for several years, seen an upsurge in domestic violent extremism, Mayorkas said, citing the Jan. 6 breach of the U.S. Capitol building as a “brutal example of our suffering.”

“As the horrific events of Jan. 6 underscored, DHS must have the operational capacity to appropriately respond to domestic violent extremism,” he wrote.

Five people died on Jan. 6—one protester who was shot by a Capitol police officer inside the building, three others due to medical conditions on U.S. Capitol grounds, and a Capitol Police officer was confirmed dead on Jan. 7 due to injuries sustained while on duty responding to riots.

“Under President Biden’s leadership, we are focused on preventing and combating domestic violent extremism,” he added. “As secretary of homeland security, I will ensure that we bring to bear the full resources of our department to counter this threat and protect the American people.”

The agency chief also announced that some of the more than $1.8 billion in various preparedness grants to be allocated nationwide will be used to support cybersecurity efforts. He noted that grants will not be able to be used to purchase equipment such as “grenade launchers, bayonets, and weaponized aircraft.”

Go Back: US News
Previous: LIVE UPDATES: CPAC 2021 speakers on Friday will include Trump Jr., Ted Cruz
Next: Rep. Chip Roy Vows to Fight the Equality Act in Court If It Becomes Law
source : www.theepochtimes.com
''

Biden to Meet With Bipartisan Group of Lawmakers About Infrastructure Proposal